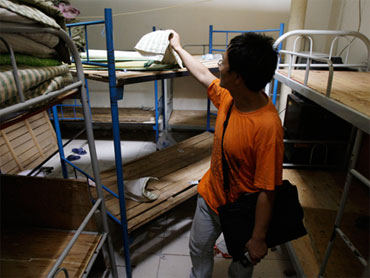 A guard at an unofficial jail in the Chinese capital has pleaded guilty to raping a young detainee, an activist said Thursday, in a case that has put a spotlight on "black jails" where a growing number of people seeking justice from the government end up.

The guard told a district court Wednesday he raped the 21-year-old student in August after she came to Beijing to ask the central government for help, local human rights activist Liu Dejun said.

Liu was not in court but was told of the guilty plea by people who attended the one-day trial. A verdict is expected within 30 days.

"He ruined my life," the woman told journalists after the trial session, the Beijing News reported Thursday.

The telephone at the court rang unanswered Thursday.

The woman, from central Anhui province, had been expelled from college because of poor exam scores and came to Beijing to ask the government to reinstate her.

Thousands of Chinese come to Beijing every year to air complaints ignored by local authorities, but human rights groups say hundreds are rounded up by provincial officials who fear the complaints may get them in trouble.

The government has denied that the "black jails" exist, and the term was not mentioned at the trial, Liu said.

In August, the ruling Communist Party ordered local officials to meet regularly with people complaining of injustices, in an effort to stop them from coming to Beijing.

The woman escaped the "black jail" with about 50 other detainees after the guard fled following the alleged rape. An Associated Press reporter visited the site of the jail - a guesthouse - just hours after the reported attack and found a filthy store room with metal-frame bunk beds, a squat toilet and a bolted door where the woman and others were reportedly held.

The night she arrived, the guard forced his way onto her upper bunk and raped her, she told the AP in August. When the detainees broke through the wooden door and ran away, they took two bloody sheets as evidence.

Liu, the activist, said at least 11 people witnessed the attack and he has interviewed three of them on videotape.

The China Daily newspaper reported Thursday that Xu was responsible for holding petitioners at the guesthouse until they agreed to leave Beijing and not return with their complaints.

Police told the court the woman had mental problems and had a limited ability to defend herself, the Beijing News reported - suggesting the guard's sentence could be more severe.

Neither newspaper reported the plea.

The woman's lawyer demanded compensation of 105,000 yuan ($15,375), but Xu said he was poor and would compensate as much as he could, Liu said in a phone interview.

The court dismissed charges against the guesthouse where the rape happened and against provincial authorities, the China Daily said.