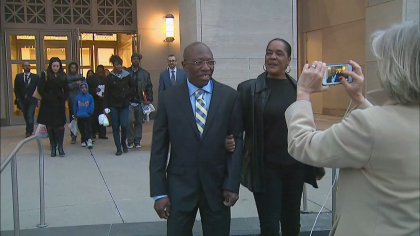 DENVER -- A Denver man who spent more than a quarter-century in prison for an attack he denies committing walked free Tuesday, locking arms with his wife as his tearful children applauded and his grandkids embraced a man they had never met.

Clarence Moses-EL, 60, posted a $50,000 bond that a judge required for his freedom after she overturned his 1988 conviction on rape and assault charges and found that he would likely be acquitted if his case went to trial again.

Moses-EL was convicted after the victim identified him, saying his face came to her in a dream. When police initially asked her who assaulted her, she named another man, who later confessed to having sex with her at the same time that night.

Outside the jail Tuesday, Moses-EL wore a black suit and tie as he stood beside his wife, Stephanie Burke, moments after hugging three of his 12 grandchildren for the first time. Surrounded by his tearful children, he took a deep breath of the crisp late afternoon air.

"This is the moment of my life, right here," Moses-EL told reporters. "I'm at a loss for words. I just want to get home to my family."

Moses-EL has long maintained his innocence, and his case inspired legislation requiring preservation of DNA evidence in major felony cases for a defendant's lifetime after police threw out body swabs and the victim's clothing.

Supporters posted bond for his release after Moses-EL was transferred from the prison where he was housed for decades.

"I waited a long time for this," said Moses-EL, who eagerly anticipated arriving home to a special pizza "with chopped shrimp and steak, smothered in cheese," and a comfortable chair. His spirituality kept him from losing hope during 28 years of his 48-year sentence, he said. "And my innocence," he said. "That's what really kept me going."

But still looming was the prospect of a new trial. Prosecutors have not decided whether to try Moses-EL again, saying they are considering the age of the case and the availability of witnesses.

A tentative trial date was set for May, if prosecutors decide to pursue new charges. The case involved a woman who was attacked after she returned home from a night of drinking. When police initially asked who assaulted her, she named the man who later confessed to having sex with her.

More than a day after the assault, while in the hospital, the woman identified Moses-EL as her attacker, saying his face appeared to her in a dream.

Moses-EL's efforts to appeal his conviction were unsuccessful and the legal and political system repeatedly failed him in his decades-long attempt to win his freedom. He won a legal bid for DNA testing on the evidence to clear his name, but Denver police threw it away, saying they didn't see any notice from prosecutors to hold on to it.

In 2008, the governor, a former Denver prosecutor, objected to legislation that would have given him a new trial and that received widespread support from lawmakers. Moses-EL's break came when L.C. Jackson, whom the victim had initially identified as her rapist, wrote to Moses-EL in 2013 saying he had sex with the woman that night.

Jackson has not been charged in this case but is imprisoned for two other rapes in 1992. His attorney, Eric Klein, said it would be foolish for prosecutors not to dismiss the case against an innocent man. But, at least in his first moments of freedom, Moses-EL's mind was elsewhere.

"I'm just glad to be home," he said. "That surpasses a whole lot of things right now."