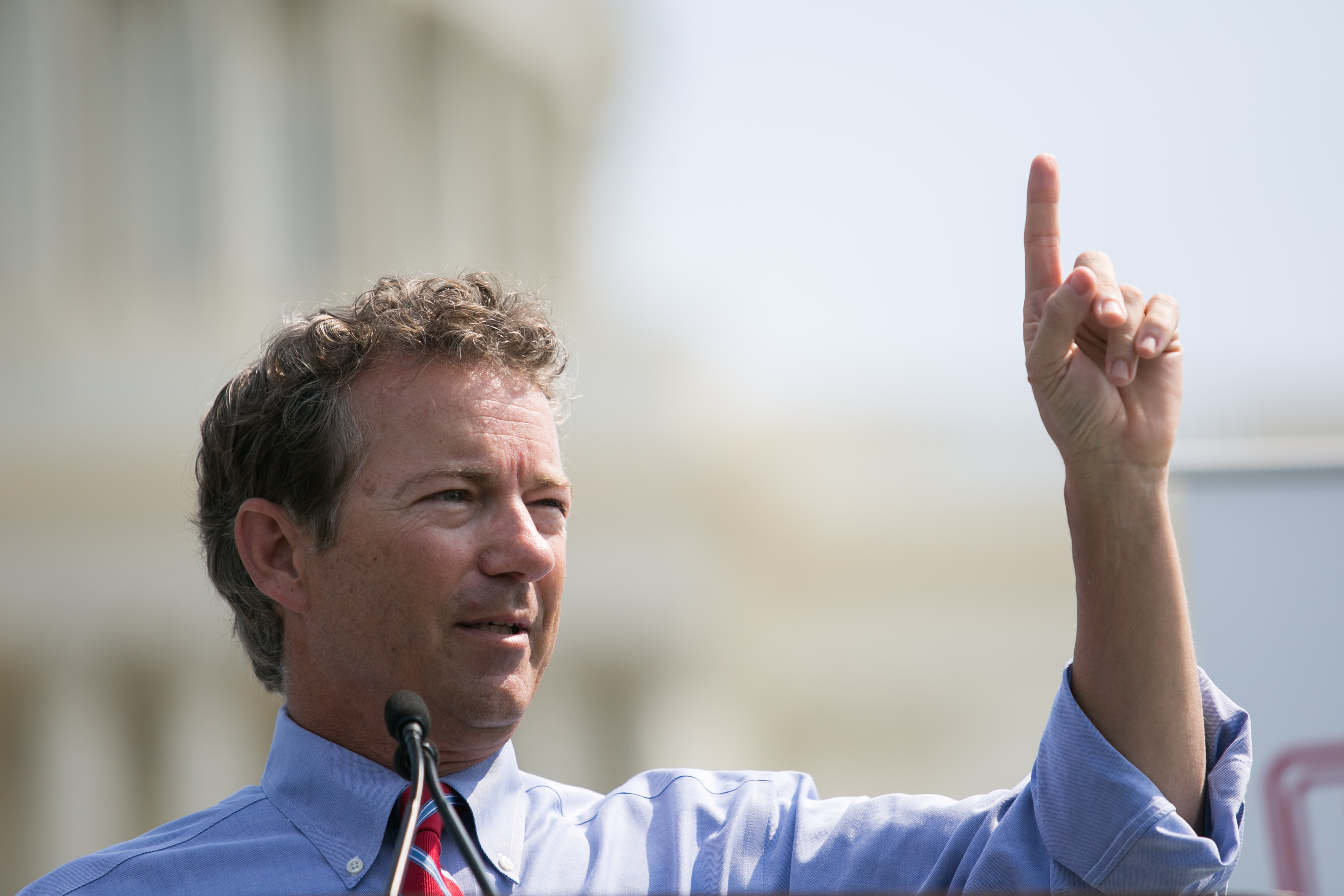 Sen. Rand Paul, R-Kentucky, had reason to celebrate this weekend after the Republican Party of Kentucky's state central committee handed Paul's flailing presidential campaign a much needed win. They agreed to switch from a primary to a special presidential preference caucus, which will allow him to run in Kentucky for both the Senate and the White House at the same time, a first for the state. Soon after, Paul headed to Alaska for another first - he's now the first presidential candidate to visit that state.

"This is my first time to come to Alaska," Paul said in a conference call with reporters from Anchorage. "The trip out West is to visit with like-minded people. Everywhere we go since the debate, the response we've gotten is larger crowds, more boisterous crowds and really, I think, more significant enthusiasm. So other than a few people online, we've actually felt like we've gotten a very good response everywhere we've gone."

"Other than a few people online" might refer to the growing number of media outlets that have chronicled Paul's spiraling poll numbers. The latest Real Clear Politics poll number averages have Paul tied at 4.3 percent, tied for eighth place with Ohio Gov. John Kasich and former Arkansas Gov. Mike Huckabee. It's a far cry from the firebrand senator who was once named by Time Magazine as "the most interesting man in politics" last fall.

Paul played down the declining poll numbers, saying that most voters were still up for grabs.

"I think one of the things that people have to keep in perspective and not get too carried away with is that one of the first questions they ask in every poll now is, 'Have you decided who you're going to support?'" Paul said. "Two-thirds of people say they're undecided. "

Paul went on to say, "I think the polls are a very temporary temperature of where people are."

He did debut a new line of attack against the GOP frontrunner, real-estate mogul Donald Trump, citing a Supreme Court case, Kelo vs. City of New London, from 2005, involving the acquisition of private property using eminent domain. Paul said the case was "probably one of the most egregious Supreme Court cases of the last ten years or so."

At issue was whether New London had the right to take parcels of land from unwilling owners in the name of "public use" as defined under the Fifth Amendment. The court ruled in favor of the government, much to the chagrin of conservatives.

Paul said that Trump is in favor of the government's authority to acquire private land. Property rights are a compelling topic for a Northwest campaign swing - many residents in the states Paul is visiting this week feel strongly about the issue.

"Donald Trump's been a big fan of this [eminent domain]," Paul said. "He used it in his business model and has really shown no consideration for small private property owners."

"I think the more people that get to know what Donald Trump has really been for through the years, I think they're going to really worry that he is a fake conservative," Paul continued. "And we're going to continue to point that out."

Asked about recent reports that Vice President Joe Biden was considering jumping in the race, Paul had more to say about Secretary of State Hillary Clinton on her use of a private server for her emails as secretary of state.

"For a year or more now, I've been saying that it's not a guarantee that Hillary will be the nominee," Paul said. "One of the reasons I've said it's bigger than everybody thought it was, it goes to judgment. You want a commander-in-chief who really appreciates the importance of national security. And when you put yourself at risk and the country at risk, with these emails potentially being exposed to enemies, I think it goes to really poor judgment. I think that, combined with the lack of providing security in Benghazi, is going to be a big issue."

Paul 's campaign will spend the rest of the week in Washington, Idaho, Wyoming and Utah as part of his quest to build an apparatus outside of the early nominating states.

As if to emphasize that point, Paul reminded reporters, "We plan on being in for the long haul."