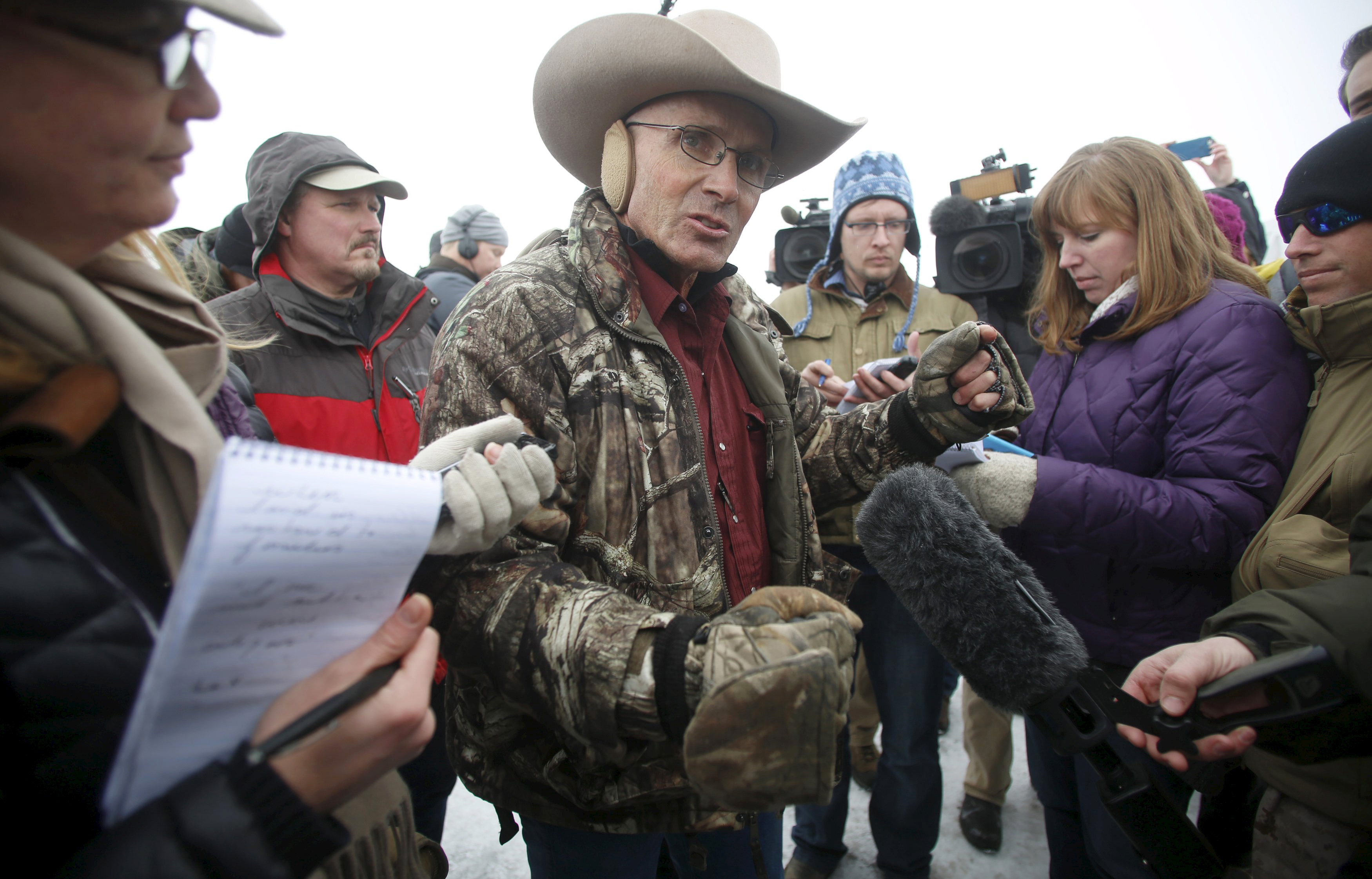 BURNS, Oregon -- A member of an armed anti-government group who was killed in a traffic stop in Oregon vowed a few weeks ago that he would die before spending his life behind bars.

It's unclear what happened in the moments before the shooting, or if Finicum or any of the other activists involved exchanged gunfire with officers. Authorities wouldn't say how many shots were fired.

Ammon Bundy released a statement through his lawyer on Wednesday.

"First I want to address my beloved friend Lavoy Finnicum. Lavoy is one of the greatest men and greatest patriots I have ever seen. His love for this country ran deep through the blood he gave yesterday," he wrote. "And I mourn for him and his family. I'm praying for you fervently in every prayer."

Ammon Bundy wrote that he is asking the federal government to allow the people at the refuge to go home without being prosecuted.

"To those remaining at the refuge, I love you. Let us take this fight from here," he wrote. "Please stand down. Go home and hug your families. This fight is ours for now in the courts. Please go home."

An Oregon man who says he witnessed the shootout says he heard about a half-dozen shots but didn't see anyone get hit, and that the shooting happened quickly -- over maybe 12 or 15 seconds.

Raymond Doherty told CBS affiliate KOINthat he was about 100 feet back and couldn't see who specifically was shooting. But, he added, "I saw them shooting at each other."

There was no immediate way to confirm the accounts. Authorities refused to release any details about the encounter or even to verify that it was Finicum who was killed.

Finicum also was a leader of the armed group that took over the refuge Jan. 2 to oppose federal land restrictions and object to the prison sentences of two local ranchers convicted of setting fires.

He was a prominent presence at the refuge and frequently talked with reporters. His affable but passionate demeanor made him a popular subject for on-camera interviews.

Finicum seemed to have made up his mind about how his role in the occupation was likely to end -- with his death.

Just a few days into the occupation, he came barreling to the refuge entrance in a federal truck.

Rifle in hand, Finicum sat in the middle of the driveway, telling the reporters gathered around him that he learned there was a warrant for his arrest and he wanted to make it easy for federal agents to find him.

At the time, he said he didn't know what the warrant charged him with, but he believed agents would try to arrest him soon.

"I don't think it really matters. There's enough things they could make a warrant for us, I believe," he said.

Finicum said he had neither threatened nor harmed anyone during the occupation.

"I have grown up loving the fresh air. I love the elements. And this is where I'm going to breathe my last breath," he said. "... I'm not going to spend my last days in a cell. This world is too beautiful to spend it in a cell."

He then gave a message to his family: "And kids, if I don't come, you know I love you and I'm proud of every damn one of you."

The rancher was media-savvy and tried to popularize and monetize his political beliefs on his website, www.onecowboystandforfreedom.com. He used the site to sell his book, a 252-page paperback titled "Only by Blood and Suffering," as well as T-shirts, bumper stickers and posters emblazoned with slogans like "Let Freedom Ring" and "Defend the Constitution Original Intent."

He described himself as a longtime friend of Cliven Bundy, and he participated in the standoff with federal authorities over grazing fees at the elder Bundy's Nevada ranch in 2014.

Finicum and his wife, Jeanette, raised dozens of foster children, though social workers removed the kids from the couple's home a few days after the occupation began.

Finicum said the foster kids were the family's main source of income.

Catholic Charities paid the family more than $115,000 in 2009 to foster children, according to tax filings. Foster parents are generally paid a small per-child amount by the government. It's intended to reimburse them for the costs incurred in fostering. The money sometimes is disbursed through nonprofit partners.

Mark McConnell said Wednesday he drove one of the vehicles stopped by authorities and that Finicum was in another and "charged" at officers.

McConnell said in a video posted to Facebook that the rancher took off and authorities pursued.

He says he didn't see the shooting, but others in the group said he charged after law enforcement.

A message was left Wednesday at a phone number believed to belong to McConnell.

Briana Bundy, group leader Ammon Bundy's sister-in-law, said Finicum and others "did everything they asked, and they murdered him." It's not clear how she got her information.

A local sheriff got emotional after the confrontation as he urged the armed activists still occupying the national wildlife preserve in Oregon to move on, saying the standoff "has been tearing our community apart."

Harney County Sheriff Dave Ward, who polices the region where the Malheur National Wildlife Refuge is located, said at a news conference Wednesday that "there doesn't have to be bloodshed in our community."

He said law enforcement worked hard to create a plan to peacefully end the occupation of more than three weeks. The group is protesting federal land policy.

Ward said the death didn't have to happen. He called on people to work through appropriate channels to air their grievances, saying, "We don't arm up and rebel."