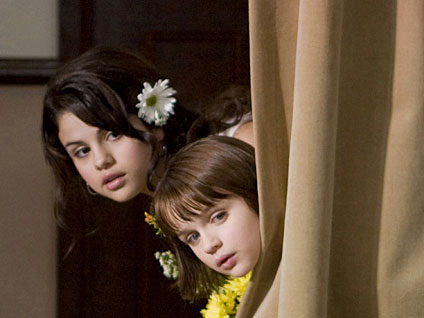 NEW YORK (CBS) Finally getting her own film after more than half a century as a much-loved fictional character is Ramona Quimby that quirky, yet irresistibly sweet problem child first given life by author Beverly Cleary back in 1955.

In "Ramona and Beezus," that precocious 9-year old who always finds herself smack in the center of a problem is brought to llife on the big screen by the perfectly cast Joey King.

Teen sensation Selena Gomez plays who is Beezus, Ramona's older and wiser sister whose perfect-child persona is a bane to her little sister.

This family-oriented film packages many of the plot elements from the popular Cleary novels, cherry-picked by writers Laurie Craig and Nick Pustay to make one sugar-coated feature that will find a niche for itself among young girls.

It might be a little harder to digest for older tweens and teens. The Quimby family, though updated through the eyes of director Elizabeth Allen, just doesn't seem to go through the same kind of family squabbles and dramas modern families do.

Part of this may be Cleary's fault.. She wanted the characters to remain ageless and so warned against incorporating too much in the way of fashion or modern technology - two things young girls today can't stay away from. It also may have prevented King and Gomez from showcasing to full effect the kind of girlhood rivalry and angst prevalent today.

I interviewed Gomez at the premiere in New York and she said she chose to audition for the role two years ago because she felt Beezus was completely different from the character she plays on the Disney show "Wizards of Waverly Place.". Watch the entire interview to hear what she thinks she's really like as a daughter and what to expect on the new season of her TV series (rumored to the final).

Along for the ride on Ramona's misadventures are her parents Robert (John Corbett) and Dorothy (Bridget Moynahan). Ginnifer Goodwin plays Ramona's sympathetic, but mixed up Aunt Bea, with Josh Duhamel as Uncle Hobart and a delightful performance from Sandra Oh as Mrs Meachum, Ramona's strict but secretly sweet teacher.

What does help bring some timeliness to the storyline is the fact that Ramona's father suddenly finds himself out of a job and a stay-at-home dad, while her mother returns to the work force. That all-too-real scenario helps make the film slightly more realistic and somewhat more endearing.

Gomez' acting is fine, but one cannot help feel she has been cast primarily to boost ratings. Teenage fans get the opportunity to see her in a different type of role and will no doubt enjoy her catchy soundtrack from the film, "Live Like There's No Tomorrow." That alone may be enough reason to go check it out with your family.