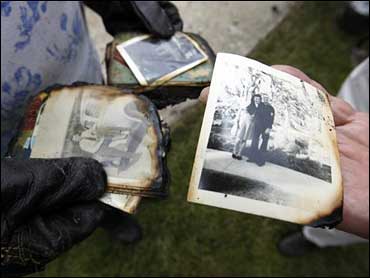 Unpredictable winds played tricks with firefighters trying to extinguish a once-massive wildfire, tamed the night before by a driving rain.

Pockets of flame occasionally rose from parts of the nearly 22 square miles of charred trees, coaxed to life by winds that have vexed firefighters since the blaze began Tuesday.

"Look: There goes one now," said Bert Plante, a division fire warden for the New Jersey Forest Fire Service, pointing to a column of smoke rising from an area of the horizon that had been clear only moments earlier. "We're still getting these little flare-ups."

CBS News meteorologist George Cullen's weather forecast for the region — "it'll be breezy, raw and at times wet" — could be a mixed blessing for firefighters.

New Jersey Air National Guard say they believe the fire started when one of their F-16s dropped a flare into the tinder-dry Pine Barrens during a training mission Tuesday.

Five homes in two senior citizen housing developments in Barnegat were destroyed, and 13 homes along the line separating Ocean and Burlington counties were damaged, but no deaths and only two minor injuries were reported, officials said. Most of the roughly 6,000 people who evacuated about 2,500 homes were allowed to return Thursday.

Lester Balkie, 85, was among those who lost their homes. His trailer in the Brighton at Barnegat development burned to the ground.

Tugging at his denim shirttails with both hands, he announced, "This is everything I own now."

Behind him, his children and other relatives picked through the ashes of what once was his home. What they managed to save fit into the palm of his hand: an expandable watch band, a commemorative coin, and a few other scraps of metal.

Losing his home in a senior citizen development, on a site he chose decades ago for its tranquility and the intoxicating pine scent of the woods, was all the more difficult because just seven months earlier, he lost his wife, Catherine.

"All my wife's pictures, videotape with her voice on it — it's all gone," he told WCBS-TV's Christine Sloan.

The fire started on the Warren Grove Gunnery Range, a 9,400-acre expanse of sand and scrub pine used for bombing practice by military aircraft. The military has promised to reimburse those who lost homes or property in the fire if federal investigations pinpoint the jet as the cause of the blaze.

"In New Jersey, 99 percent of all wildfires are caused by humans and we have a state law that authorizes the forest fire service to seek reimbursement from any entity that starts a forest fire," said Maris Gabliks of the New Jersey Forest Fire Service.

"What's left to do is clean up 'dozer lines and see what's unburned to make sure that it's not a potential to flare up again," said firefighter Patricia Sorenson.

Although more than a half-inch of rain fell on the blaze Wednesday night, just as the fire was threatening to make a run at the heavily traveled Garden State Parkway, large sections of the 14,000-acre fire area remained smoldering Thursday. Some additional rain forecast for late Thursday into Friday was expected to help.

Elsewhere, some northern Minnesota residents were allowed to check on their homes along the Gunflint Trail, a road into the wilderness where a fire has burned more than 117 square miles in the U.S. and Canada. About 140 structures, including more than 60 homes, were destroyed, but two days of wet, cool weather have helped firefighters make progress getting it contained.

Residents grieved over cabins that had been in their families for generations, and worried about neighbors who might have to move.

"That is one of the essentials or one of the joys of living up here, is the people. Absolutely the people," 80-year-old Ardis David said as she held the hand of 87-year-old Nathalie Rusk, a neighbor who walks with her to get the mail every morning.

Rusk's house was spared. David's log cabin home of 32 years was destroyed, but she plans to rebuild with help from family and friends. "It's something positive to cover up all that negative stuff that happened," she said.

Firefighters continued to battle a huge fire along the Florida-Georgia state line, where more than 700 homes were evacuated. Calmer wind Wednesday allowed firefighters to strengthen their containment lines, but the wind and temperature were expected to rise during the weekend, said Jim Harrell, a spokesman for the Florida Division of Forestry.

By Thursday, the blazes had charred 552 square miles in Florida and Georgia. The haze has reached as far north as central North Carolina and as far south as Miami.

The fire near Lake City covers 120,515 acres and was 65 percent contained, Harrell said. Wind and rising temperatures this weekend could hamper efforts to control it.

Near Payson, Ariz., a 4-square-mile wildfire forced about 20 people to evacuate homes on Thursday. Authorities believe the fire, which started Sunday, was human-caused.