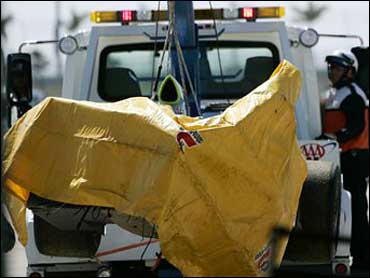 Driver Paul Dana died after a two-car crash Sunday during the warmup for the season-opening IRL IndyCar Series race at Homestead-Miami Speedway.

The other driver, Ed Carpenter, was awake and alert at a Miami hospital, IRL officials said.

Dana, 30, a former motorsports journalist with a degree from Northwestern, was a rookie who competed in three IRL races for Ethanol Hemelgarn Racing last year with a best finish of 10th in the race at Homestead.

The Toyota Indy 300 race was expected to be run as scheduled. Bobby Rahal, co-owner of Rahal Letterman Racing for which Dana was to race this season, said the team's other two cars — driven by Danica Patrick and Buddy Rice — will be pulled out of the race.

Dana's wife, Tonya, was in Indianapolis, where the couple lived, and was notified of her husband's death while attending a church service.

"Obviously, this is a very black day for us," Rahal said. "This is a great tragedy."

Carpenter spun and hit the wall moments after the practice began at 10 a.m. EST. As Carpenter's battered car slid to a stop, Dana slammed into it at almost full speed — about 200 mph.

Dana's car nearly split in half. The chassis flew about 6 feet off the ground and pieces were strewn down the track. It nearly turned over, but landed on its wheels before sliding to a halt.

Buddy Lazier said Dana passed him and Scott Sharp after both slowed because of the accident.

"He carried way too much speed in and wasn't aware of what was going on around him," Lazier said.

Asked about Dana, Tony George, who founded the IRL in 1995 and is Carpenter's stepfather, said, "I really don't know at this point what happened or who was at fault. It's just a real shame. I don't know that it was inexperience. I don't want to say anything about that."

There was no immediate explanation for Dana's failure to slow down several seconds after the yellow lights came on around the track because of Carpenter's crash.

"That's just the first time of the weekend that we got all 20 cars on the track at the same time," said IRL president Brian Barnhart. "Ed had his problem in turn two initially. The yellow lights were called immediately and all systems functioned properly. It's just a busy time out there, with a lot of cars and a lot of traffic."

Rahal said the team knew of no problem with communications.

"The spotter made clear the incident," Rahal said. "From what I could see, there was a car on the outside. Paul was just passing or had just passed, but I think it would be conjecture and probably very irresponsible for me to try to dissect as to why what happened, happened. But there was no problem with communication."

It took track safety workers about 15 minutes to get both drivers out of their cars. The practice session did not resume.

A moment of silence was observed before the start of the 300-mile race. Otherwise, the prerace ceremonies, including the introduction of the remaining 17 drivers, went according to schedule.

Rahal, who co-owns the team with television talk show host David Letterman, said the plan was to field cars for Patrick and Rice at next Sunday's race in St. Petersburg, Fla. He said any future plans for the No. 17 entry, the car driven by Dana, "are unclear at this time."

George, who owns the Vision Racing team that fields cars for Carpenter and Tomas Scheckter, returned from the hospital about one hour before the start of the race. He did not disclose his stepson's injuries, but said Carpenter was still awaiting a CAT scan, adding "He's the lowest priority, so it looks like he will be fine."

Dana is the first IRL driver killed since Tony Renna died in a crash during testing at the Indianapolis Motor Speedway in October 2003. The last NASCAR driver killed was Dale Earnhardt in February 2001, and the last driver to die in Formula One was Ayrton Senna in May 1994.

It is the third racing death at the Homestead track — John Nemechek was killed in a NASCAR truck race in February 1997 and Jeff Clinton died in a Grand Am sports car event at the track in March 2002.

The IRL also had a tragedy in May 1999 when a wheel from a car sailed into the grandstand at what was then Charlotte Motor Speedway, killing three spectators and injuring eight others.