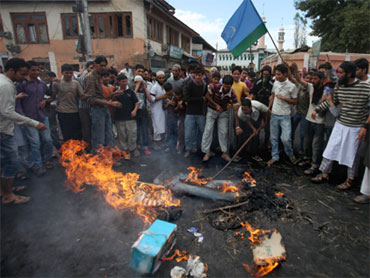 Indian forces killed 14 protesters and wounded scores of others Monday in confrontations across Kashmir fueled in part by a report that a Quran (Koran) was desecrated in the United States, police said. A police officer was also killed.

The violence, the worst since separatist protests erupted in June, came as Indian officials debated whether to ease harsh security regulations to try to ease tensions in the disputed territory.

Despite a rigid curfew clamped across the region, tens of thousands of protesters took to the streets, throwing rocks, torching government buildings and a Christian school and chanting, "Go India, go back. We want freedom."

Security forces shot at crowds in about a dozen different places, killing 13 people and wounding 45 others, said Kuldeep Khoda, the director-general of the state police.

A teenage boy was killed later when troops opened fire in the southern town of Anantnag, according to a police officer who spoke on condition of anonymity as he was not authorized to talk to reporters.

While separatists had planned a new round of demonstrations following the end of the Muslim holy month of Ramadan this weekend, the anger in the streets Monday was far greater than in previous protests over the summer. They were inflamed by reports on the Iranian state-run channel Press TV that the Quran was desecrated over the weekend in the United States, Khoda said.

Though a Florida pastor called off his plans to burn the Muslim holy book, the channel showed footage of a different man destroying a Quran in Tennessee. Most broadcasters around the world did not prominently report on scattered desecration incidents by a handful of fringe anti-Muslim activists in the United States; the Iranian broadcaster carried the footage repeatedly.

The protesters chanted "Down with Quran desecrators," and protest leaders denounced the alleged desecration in speeches to the crowds. There were also shouts of "Down with America" and "Down with Israel" - rarely heard in Kashmir, where anger is normally only directed at India.

As the protests worsened, the station was removed from local cable networks at the insistence of Kashmiri authorities.

U.S. Ambassador Timothy Roemer said the U.S. government was "dismayed" by reports of the rioting and appealed for calm.

He also condemned any Quran desecration as "disrespectful, intolerant, divisive and unrepresentative of American values. The deliberate destruction of any holy book is an abhorrent act."

In New Delhi, Prime Minister Manmohan Singh said India was searching for a peaceful resolution to the summer of conflict.

"We are willing to talk to every person or group which abjures violence, within the framework of our constitution," Singh said in a speech to top army commanders.

Singh's statement came hours ahead of a meeting of top Cabinet ministers that was expected to decide whether to lift the Armed Forces Special Powers Act - which gives sweeping powers to security forces in Kashmir - as a goodwill gesture in parts of the territory that have been relatively peaceful.

A statement issued after the Cabinet ministers' meeting did not mention the act, suggesting that no decision was taken on the issue.

Some government officials strongly oppose the move as premature, pointing to the flare-up in violence in the Himalayan region over the weekend as justification for intensifying the crackdown.

The region has been roiled for months by protests. The demonstrations often descend into clashes with government forces, and though Singh has called for the use of non-lethal force, troops have often resorted to firing on the crowds to quell the unrest. They have killed at least 83 people this summer - mostly teenage boys and young men in their 20s - with the deaths fueling further protests.

In the village of Tangmarg, a town 25 miles (45 kilometers) northwest of Srinagar, troops fired on thousands of rock-throwing demonstrators Monday, killing five people and wounding at least 50 others, according to police. Earlier, protesters burned at least four government buildings as well as a Christian schoolhouse in the town.

In the western town of Budgam, troops tried to disperse demonstrators with tear gas and baton charges but began firing into the crowd after protesters attacked a police station and the government forces with rocks, police said. At least four people including a young woman were killed and at least 30 others were wounded, some critically, according to a police officer, who spoke on condition of anonymity because he was not supposed to speak to the media.

A policeman was also killed during the protests in Budgam after he was hit by a vehicle that then sped away, the officer said.

At least four other protesters were killed in three other towns, the officer said.

A doctor at the main hospital in Srinagar said they received at least 25 wounded with bullet injuries. He spoke on condition of anonymity because the government banned health officials from speaking to the media.

Anger at India runs deep in Kashmir, which is divided between India and Pakistan and claimed in its entirety by both countries. The mainly Muslim protesters reject rule by Hindu-dominated India and want independence or a merger with predominantly Muslim Pakistan.

The current unrest is reminiscent of the late 1980s, when protests against New Delhi's rule sparked an armed conflict that has so far killed more than 68,000 people, mostly civilians.

Singh said the grievances of the youth of Kashmir have to be addressed.

"We have to ensure better delivery of services and generate avenues for economic advancement for the people of that state," he said.

However, Kashmiris main complaints are not over economics, but rather the presence of hundreds of thousands of Indian troops in the region, the use of harsh security laws there and the lack of progress toward independence.

Syed Ali Shah Geelani, a key separatist leader, said lifting the security laws would not satisfy Kashmiris. "We want end to Indian occupation here and have already laid out our proposal for initiating a dialogue," he said.