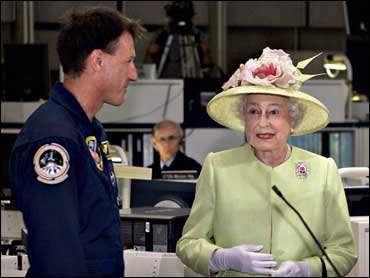 Queen Elizabeth II heard three astronauts describe their work aboard the international space station Tuesday as she neared the end of a whirlwind, six-day U.S. tour.

The crew members — American Suni Williams and two Russians, Commander Fyodor Yurchikhin and Flight Engineer Oleg Kotov — answered questions from British-born NASA astronaut C. Michael Foale, who stood next to the queen. The video link at the Goddard Space Flight Center was one-way, so the crew members could not see the queen standing by silently wearing a large yellow hat.

After hearing from the astronauts, the British royals continued a tour of Goddard, in suburban Greenbelt, Md. She helped plant a tree in a garden outside the flight center commemorating her visit. The flight center is home to the largest organization of scientists and engineers in the United States, according to NASA.

Later in the day, the queen is expected to pay tribute to American soldiers with a trip to the National World War II memorial before capping her visit by hosting a dinner for President Bush and his wife, Laura, at the British Embassy. It was a return favor for the white-tie state dinner Bush put on for the royal couple Monday night at the White House.

The queen, accompanied by her husband Prince Philip, had a full day of sightseeing in the U.S. capital planned for Tuesday, including a stop at the Children's National Medical Center with the first lady.

It was to be the British Monarch's first visit to the war memorial, which was dedicated in 2004. The queen, a teenage princess during World War II, won permission in 1945 from her father, King George VI, to join the war effort as a driver in the Women's Auxiliary Territorial Service, the women's branch of the British Army. She became known as No. 230873 Second Subaltern Elizabeth Windsor.

The royal couple will fly back to England Tuesday night.

On Monday morning, the Bushes waited on a near-perfect spring day as the queen and Prince Philip arrived by limousine for their official welcome at the White House. The two couples briefly shook hands before moving on to the formal welcome, which included trumpet fanfares and a 21-gun salute.

The day ended with a second visit to the White House for the administration's first white-tie state dinner. It was designed to showcase American culture and cuisine. But the hosts did not forget to include special touches designed to honor its British ally and make the queen feel welcome.

The centuries-old vermeil flatware and candelabras came from a London silversmith. A made-of-sugar replica of the queen's 1953 coronation rose graced the cake.

English farmhouse cheeses accompanied the salad course. And the traditional "special guest" invited only at the last minute was sure to be of interest to a horse enthusiast such as the queen: Calvin Borel, the jockey who rode Street Sense to victory in the Kentucky Derby on Saturday with the royals in attendance.

2For the sixth state dinner of Bush's presidency, the State Dining Room was decked out in white and gold. Among the 134 guests were scores of diplomats, business men and women and members of Congress. Other than American football star Peyton Manning and golfer Arnold Palmer, the celebrity quotient was low.

In the leaders' toasts at dinner, they took opposite tacks. Bush praised the queen for a reign that has "deepened our friendship and strengthened our alliance," while the British monarch talked of the threat of terror, problems like climate change and the likelihood of occasional disagreement between allies.

"Ours is a partnership always to be reckoned with in the defense of freedom and the spread of prosperity," she said.

"Her message was very clear," the queen's former press secretary, Dickie Arbiter, said on The Early Show Tuesday. "She was speaking on behalf of the British government in saying that, yes, we do have differences, we do talk about these differences, but we're still united."

Virtuoso violinist Itzhak Perlman performed what he called "musical bonbons" as an after-dinner treat. The evening was capped with songs from the U.S. Army Chorus.

It was a day of high pomp and pageantry from a president known for his informality. It also was an uplifting event for a White House at a time when Bush's approval rating has dropped near all-time lows and he battles a Democratic Congress over funding for the unpopular Iraq war.

The queen's visit is her fifth to the United States in 50 years and her first since 1991.