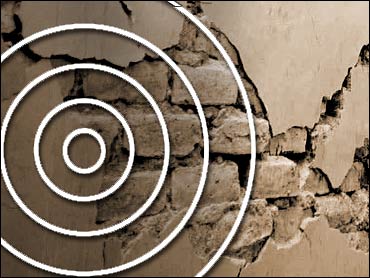 A powerful earthquake rocked northeastern Japan on Monday, starting fires and landslides, knocking out power, and disrupting road and rail traffic. Buildings swayed in Tokyo, hundreds of miles away.

Police said 54 people were hurt, but only six injuries were serious and damage was minor.

The quake registered a preliminary magnitude of 7.0 and was the strongest to hit Japan in more than two years, the nation's Meteorological Agency said. An agency official suggested the impact of the quake might have been mitigated by its depth.

The temblor was centered 44 miles below the sea floor about 12 miles off the coast of northeastern Miyagi prefecture (state), the agency said.

A magnitude 7.0 quake can cause major damage over a widespread area. More than 6,000 people were killed in the western city of Kobe when a magnitude-7.2 quake struck there in 1995.

Monday's quake was felt across Japan's main island of Honshu. It cracked foundations and emptied store shelves in cities near the epicenter and caused skyscrapers to sway in Tokyo, 260 miles away.

Thousands of travelers were stranded as rail and road traffic were halted while officials checked for damage.

Fifty-four people were hurt and 31 houses were damaged, all in the northern prefectures (states) of Iwate, Miyagi, Akita and Aomori, said Tomoki Sano, a spokesman for the National Policy Agency in Tokyo.

Sano said most of the injuries were minor and caused by falling household objects and broken glass. Serious injuries included a man who broke a vertebra after falling off his roof while trying to fix an antenna.

Three fires broke out, one at a power substation and two at houses, and 19 landslides were reported in the region, the police official said. About 35,000 homes lost power after the quake for about 45 minutes.

Meteorological Agency official Noritake Nishide described the epicenter as "relatively deep" and said there was no danger of tsunami, powerful waves that can be stirred up by seismic activity.

The quake was the strongest here since a magnitude-7.3 quake hit southwestern Tottori prefecture (state) in October 2000, injuring more than 130 people.

Japan is one of the world's most earthquake-prone countries and has accordingly adopted tough building standards. It is pulled by four tectonic plates, the huge slabs of land that cover the earth's crust.

The agency said 92 aftershocks had been recorded as of 9 p.m. local time.