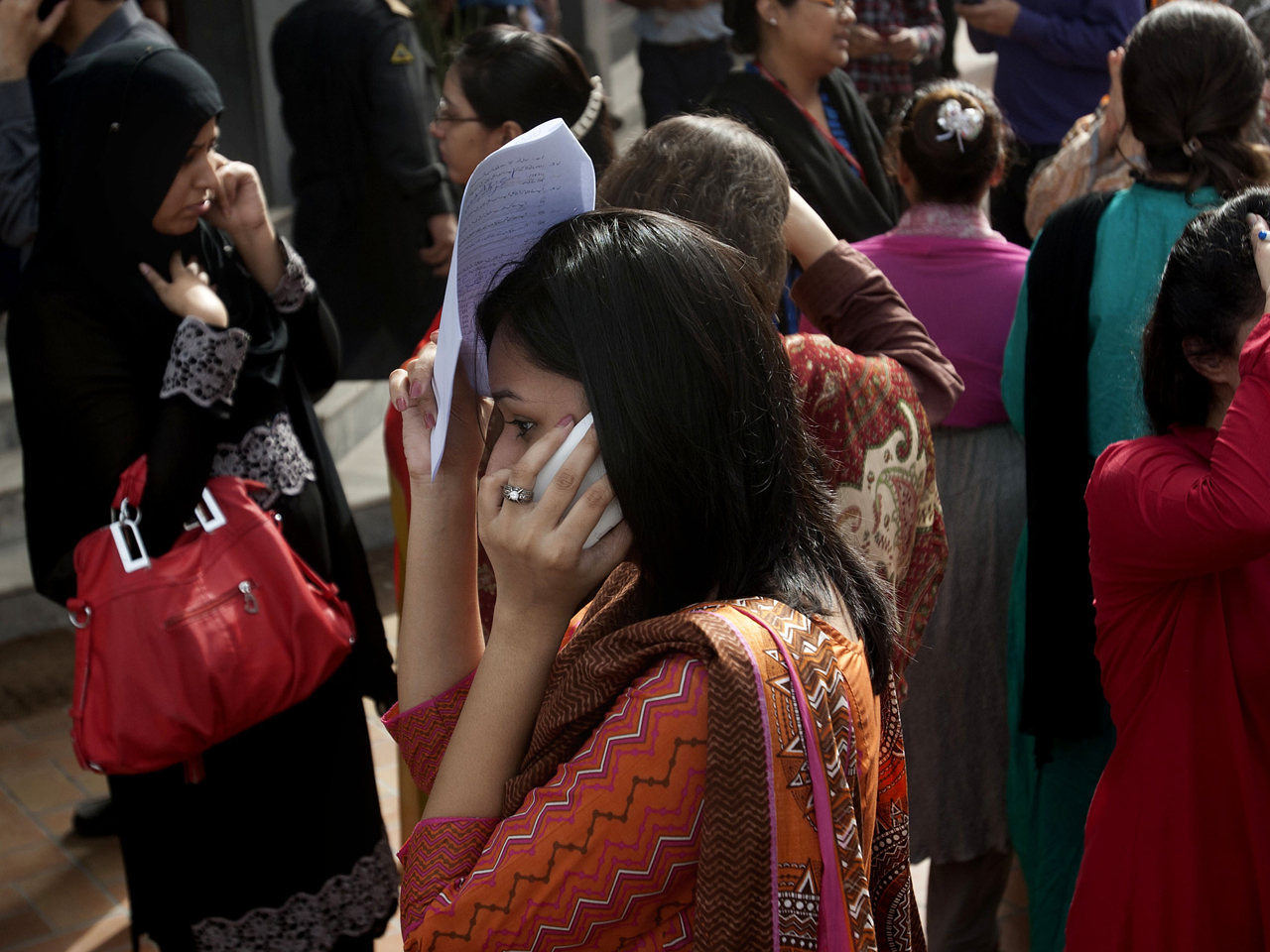 TEHRAN, Iran An earthquake toppled homes and shops on both sides of the Iran-Pakistan border Tuesday, killing dozens of people and causing skyscrapers to sway in Dubai. It also forced Iranian officials — for the second time in less than a week — to issue assurances that its main nuclear reactor wasn't damaged.

At least 34 people were killed in a single village in Pakistan, a military official said. But the overall death toll became clouded after conflicting reports from Iran.

At first, Iran's state-in Press TV said at least 40 people died — which would push the two-nation tally to 74. But it later retreated from its account, and other Iranian outlets stepped in with a far less dire picture.

Despite the conflicting reports on the Iranian side, a Pakistani military official said at least 34 were killed on their side of the border and 80 were injured. Up to 1,000 mud homes were damaged, Pakistan Television added. The military spoke on condition of anonymity in line with Pakistan military policy.

A Pakistani policeman, Azmatullah Regi, said nearly three dozen homes and shops collapsed in one village in the Mashkel area, which was the hardest hit by the quake. Rescue workers pulled the bodies of a couple and their three children, ages 5 to 15, from the rubble of one house, he said.

The Pakistani army ordered paramilitary troops to assist with rescue operations and provide medical treatment. Additional troops are being moved to the area, and army helicopters were mobilized to carry medical staff, tents, medicine and other relief items.

The discrepancies and apparent backtracking in the Iranian reports could not be immediately reconciled, but it was the second quake to hit Iran in less than week and authorities could be seeking to downplay casualties.

Commentary on Iranian TV criticized international media for "exaggerating" the death toll, raising further questions about the full extent of the damage in the rugged region that's a front line in Iran's battle against drug traffickers and the Sunni-based militant group, Jundallah, which carries out sporadic attacks.

Iran's state-run Press TV initially said at least 40 people were killed on the Iranian side, but later removed the figure from its website and news scroll. Other state-controlled outlets, including the official IRNA news agency, mentioned no deaths and only up to 27 injuries, quoting a local official.

The website of Tehran Geophysics Center said the quake, measured at least magnitude 7.7, lasted 40 seconds and called it the strongest in more than 50 years in one of the world's most seismically active areas. Press TV called it "massive," but likely far less than menacing than lesser quakes in far more populated areas.

It also was the second deadly quake to hit Iran in less than a week after a magnitude 6.1 temblor struck near Bushehr, on Iran's Persian Gulf coast, killing at least 37 people and raising calls for greater international safety inspectors at Iran's lone nuclear reactor nearby.

Press TV said the quake was centered near Saravan, about 50 kilometers (26 miles) from the Pakistani border. The U.S. Geological Survey put the preliminary magnitude at 7.8 and at a depth of 15.2 kilometers (nine miles).

Iran's nuclear chief Fereidoun Abbasi said there was no damage to the Bushehr reactor and invited U.N. inspectors to visit, the semiofficial ISNA news agency reported. Abbasi repeated the statement issued after last week's quake: The Bushehr plan was built to withstand quakes up to magnitude 8, which is considerably stronger than Tuesday's temblor.

The Washington-based Institute for Science and International Security also called any damage to Bushehr "unlikely" from the latest quake, which is nearly 1,000 kilometers (600 miles) from the border region.

Rowena Lohman, an earthquake physics expert at Cornell University, said some unusual geophysics may have prevented much greater damage and casualties.

"Today's earthquake in southeastern Iran was large but fairly deep, which reduces the expected level of damage relative to a shallower earthquake of the same magnitude," she was quoted as saying in a statement.

In Iran, the Red Crescent said it was facing a "complicated emergency situation" in the area with villages scattered over desolate hills and valleys.

The quake was felt over a vast area from New Delhi — about 1,500 kilometers (900 miles) from the epicenter — to Gulf cities that have some of the world's tallest skyscrapers, including the record 828-meter (2,717 -foot) Burj Khalifa in Dubai. Officials ordered temporary evacuations from the Burj Khalifa and some other high-rises as a precaution.

A resident in the quake zone in Iran, Manouchehr Karimi, told The Associated Press by phone that "the quake period was long" and occurred "when many people were at home to take a midday nap."

Pakistani news channels showed buildings shaking in the southern city of Karachi, where people in panic came out from offices and homes.

In a message posted on Twitter, British Foreign Secretary William Hague sent condolences to families of those lost in the Iran earthquake.

In 2003, some 26,000 people were killed by a magnitude 6.6 quake that flattened the historic southeastern Iranian city of Bam.