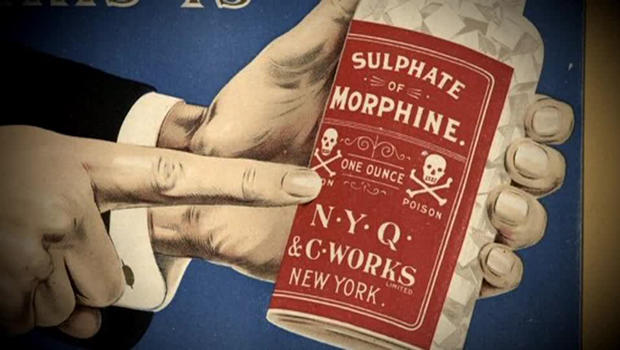 A self-described "genius entrepreneur" with a "coronavirus prevention pill" arrested by the FBI ("You take this pill once a day and you cannot contract the virus").  Televangelist Jim Bakker sued by the state of Missouri to stop promoting "Silver Solution," a so-called cure for COVID-19 (which his TV spot claims "totally eliminates it, kills it, deactivates it").

They are just two examples of modern-day medical quackery.

The term 'Quack' originates from the word quacksalver, a middle Dutch word that means somebody who boasts or brags about themselves, said Dr. Lydia Kang, co-author of a book on the long history of quackery: "So, it's somebody on the street corner that's hawking their wares."

Kang defines "quackery" as the promotion of a treatment or cure without a solid scientific basis. In other words, fake medicine. And it's generally thought to have reached its heyday in this country toward the end of the nineteenth century.

"At the end of the 1800s, there was a guy named Clark Stanley, who was selling a liniment that he claimed had snake oil in it," Kang replied. "And he was saying basically it could cure everything."

As for what was actually in it? "It had beef fat and pepper and turpentine," said Kang. "But there was no snake oil in it. And he made a ton of money off of it."

But many discredited practices were genuinely considered best practices in their time. For thousands of years, trepanning – the drilling of holes in the head – was used to release evil spirits.

And long before the current opioid epidemic, opium, the highly-addictive narcotic derived from the opium poppy plant, was a respectable go-to pain reliever.

Kang said, "They used it for everything under the sun. So, you know, if you're having a bad day, you would take some opium. You're nervous? You take some opium. If you have some crying babies at home and you're busy parents trying to go to the factory, you dose 'em up with some opium."

Heroin, a derivative of opium, was once even sold over-the-counter by Bayer for sore throats and respiratory ailments.

At the opposite end of things, there were equally un-scientific remedies. "My gosh, they used so many different things in enemas," said Kang. "Pretty much anything in your kitchen cupboard could go into an enema. So, things like milk and honey."

And then there was the tobacco enema."You've probably heard of the term 'blowing smoke up someone's a**,'" Kang laughed. Yes, that's where that expression comes from.

"In England for a little while, they were actually used as a means of reviving drowning victims."

And remember mummy eating? You're glad you don't! "One of the weirdest things is that Egyptian mummies were taken from their tombs, stolen, and then sold overseas, because they were considered this fantastic remedy for everything," said Kang.

Rocca asked, "How could you be assured that you were eating a ground-up mummy and not just some random guy?"

"That is true. People would sometimes take, like, dirt and soil and ashes, and they'd be, like, 'Oh, this is bona fide, real mummy!'"

Now, lest we mock our benighted forebears too much, Kang notes accepted practices today that might very well be seen as "quackery" in 50 or 75 years' time: "Oh, absolutely! You know, it's funny, when I was in medical school, there was this saying which was, 'Half of what we're teaching you here is wrong. We just don't know which half.'

"Fifty years from now the things that I think are going to be really considered right now kind of barbaric are going to be things like the way that we screen for cancers. So, for example, doing a colonoscopy and having to drink that terrible prep and going to get the actual colonoscopy done."

Of course, colonoscopies work; they're essential in screening for colon cancer – an important distinction from certain products being pushed today.

And with the public concern about COVID-19, "Scammers everywhere are including that in whatever they're marketing," said Dr. Stephen Barrett, who runs the internet site Quackwatch.

He said the most dangerous is a product called Miracle Mineral Solution, or MMS, an industrial-strength bleach. That's right, bleach!  MMS has been falsely promoted as a cure for everything from HIV to malaria, and now COVID-19.

"The FDA pretty much drove the sellers out of the U.S. market," Barrett said.

Yet, this past Thursday, President Trump wondered out loud whether injecting household disinfectant into the body might kill coronavirus. "I see the disinfectant, where it knocks it out in a minute. One minute," Mr. Trump said. "And is there a way we can do something like that, by injection?"

Medical experts and manufacturers were quick to point out that consuming those products can kill you.

In recent weeks, accusations of quackery have been leveled against two of television's most famous doctors. Heart surgeon Dr. Mehmet Oz was criticized after hyping the use of the drug hydroxychloroquine as a treatment for COVID-19, when the benefits are far from conclusive. He has since reversed himself.

And Dr. Phil McGraw, a former clinical psychologist, incorrectly compared the disease's danger with other causes of death, from automobile accidents and cigarettes to drownings in swimming pools.  He, too, backtracked.

While the peddlers of quack medicine may have mixed motives, Dr. Lydia Kang said that the patients should always be treated with compassion: "A lot of it really just comes down to fear (People don't want to be sick, they're afraid of being sick, they don't want to get worse), and hope (They want to get better, and they'll look for whatever they can to do so)."

READ A BOOK EXCERPT: "Quackery," on how radium acquired a glowing reputation as a cure-all

Nature and architecture merge in Mexico
Thanks for reading CBS NEWS.
Create your free account or log in
for more features.
View CBS News In
CBS News App Open
Chrome Safari Continue
Be the first to know
Get browser notifications for breaking news, live events, and exclusive reporting.