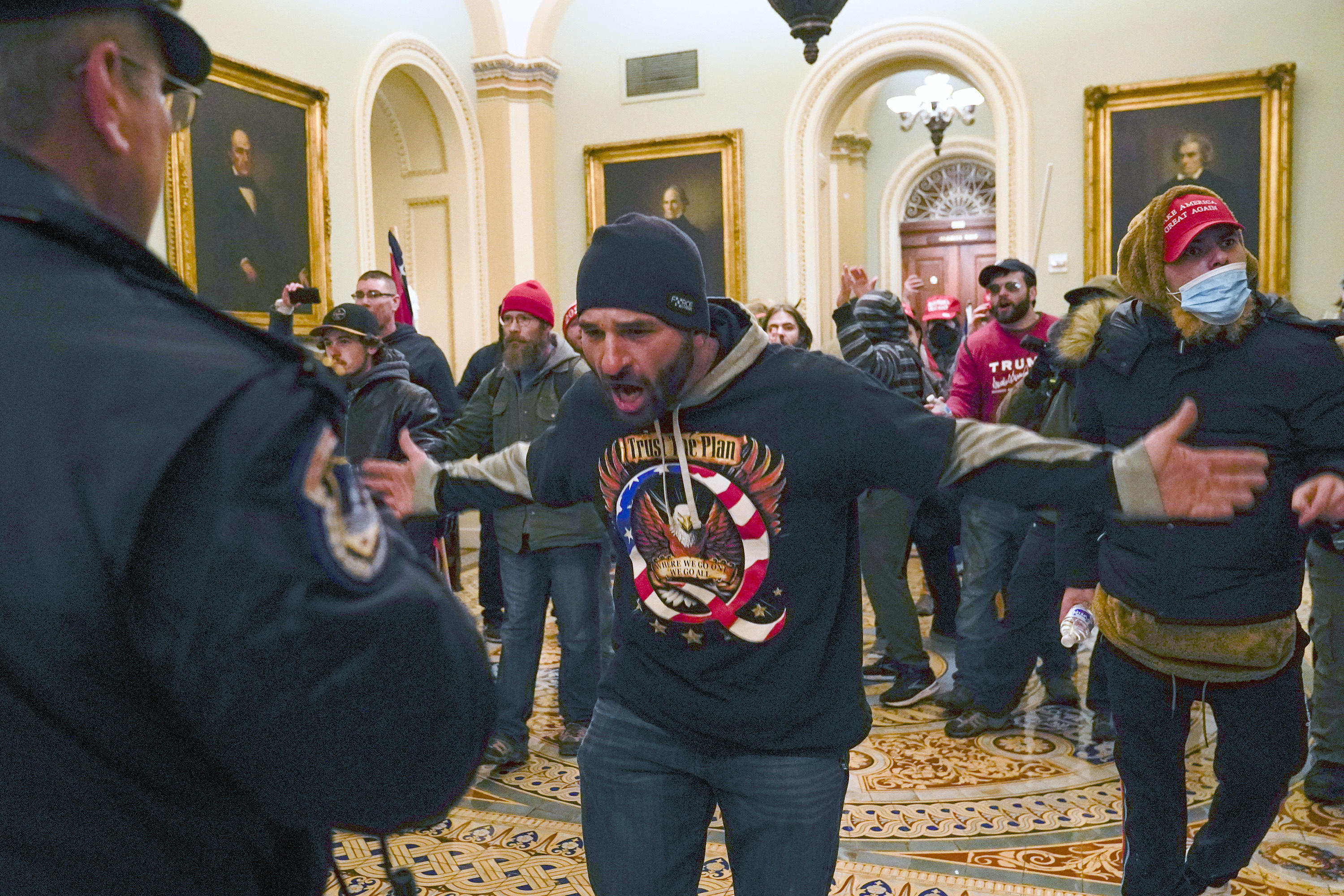 Doug Jensen, a QAnon conspiracy theorist from Iowa, was accused of being among the first to breach the U.S. Capitol and was at the front of the mob that chased U.S. Capitol Police officer Eugene Goodman up the stairs of the Capitol on Jan. 6, 2021.

Goodman testified in the trial that he felt boxed in and engulfed by the mob led by Jensen. Prosecutors showed video from that day in which Goodman was seen leading the mob away from the Senate floor, where senators were sheltering at the time. He said that he ran across Sen. Mitt Romney in the hall and urged him to return to the floor, where he would be safer.

He also testified that he had suffered a blow to the head from an item thrown from within the mob. He recalled being overcome by bear spray at one point and retreating to the Capitol Rotunda to wash his eyes. While in the Rotunda, Goodman vomited into a bucket before running back outside to the confront the rioters, according to his testimony.

Goodman told the court that he responded to an urgent radio call when the doors of the Capitol were breached — he ran toward his post outside the Senate chamber, and then was  credited with luring the mob away from U.S. senators, some of whom were still on the floor as their evacuation was underway.

Justice Department prosecutors argued Jensen "was there … so he could get Mike Pence."   They noted that Jensen was seen "outside the door where the vice president was supposed to be," and added, "that doesn't happen by accident."

Jensen gained unique notoriety because of the footage and the distinctive black QAnon shirt he wore that day. He didn't testify in his own defense.

He has been held in pretrial detention and will remain in jail pending sentencing. Jensen had already violated pretrial release restrictions on cellphone use by watching a cellphone video feed of MyPillow CEO and Trump ally Mike Lindell.

Jensen's attorney described him in closing arguments as a "terribly confused man on Jan. 6 who believed in QAnon and whose mindset was impacted by the pandemic."

He argued that Jensen should not be lumped together with the other more violent defendants at the Capitol that day because he didn't actually harm anyone: "This man never raised a hand. He never got physical. He never threatened anyone."

The defense also argued that the reason Jensen was at the Capitol was that he wanted the officers there to arrest the vice president and that Jensen truly believed that it needed to happen. Jensen, was carrying a knife in his pocket at the Capitol, but his attorney claimed he had it not because he intended to use it, but because he's a blue-collar worker.

The government, however, pointed out that Jensen had made multiple comments to officers he encountered that suggested his intentions were more violent than depicted by the defense. He had told USCP Inspector Lloyd to "surrender the building" and asked another officer at one point, "can't we just storm in there?"

Prosecutors said that Jensen didn't just happen to be at the front of the mob chasing Goodman. They said he weaponized the mob, that he had gone to great lengths to get into Capitol building, scaling a wall and jumping through a window he had watched others shatter.

Jensen will face sentencing on Dec. 16 and will remain in pretrial detention until then.

Assault On The U.S. Capitol

Officers honored with Congressional Gold Medals for actions on Jan. 6