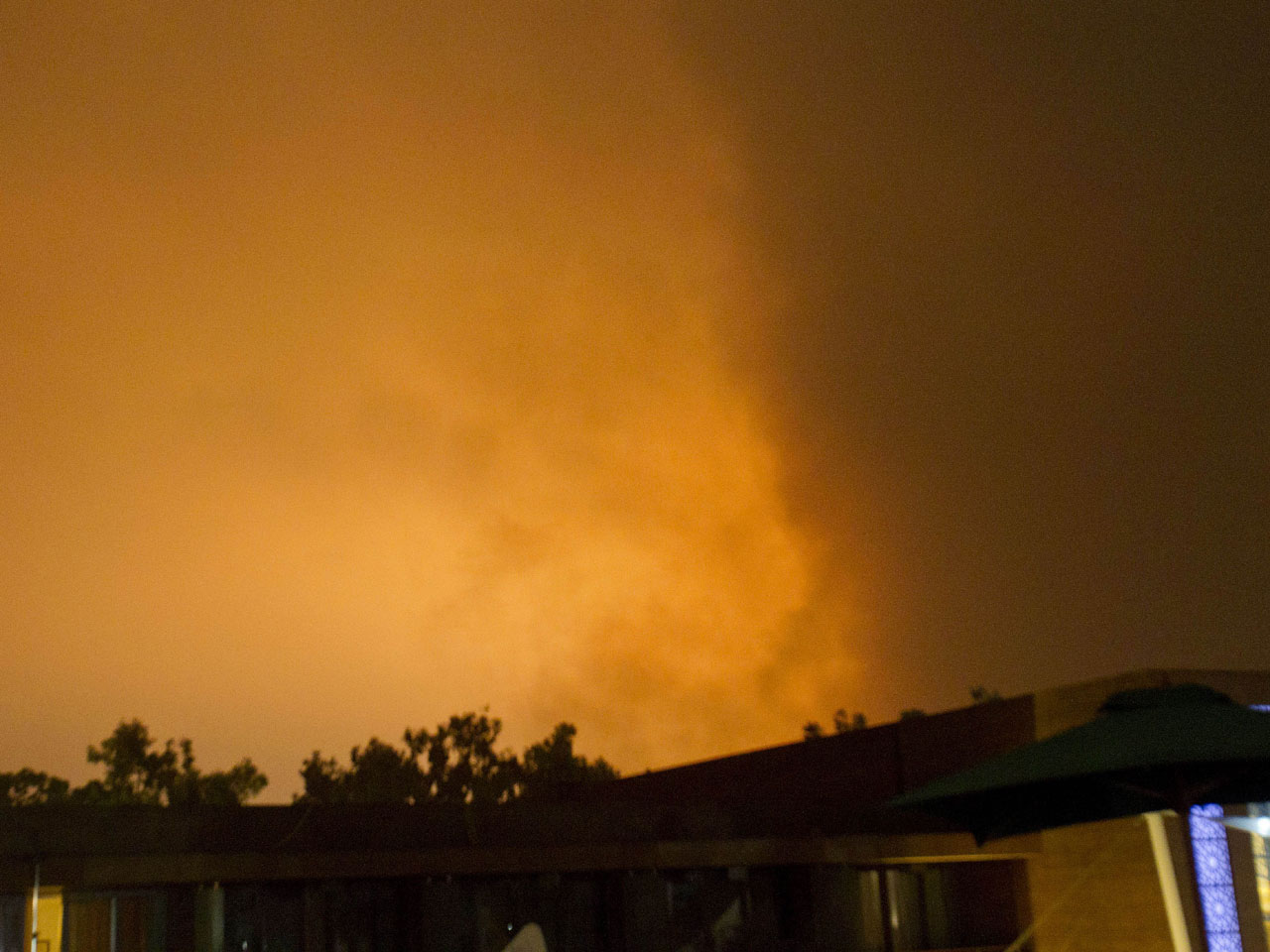 TRIPOLI, Libya - NATO launched its most intense bombardment yet against Muammar Qaddafi's stronghold of Tripoli Tuesday, while a senior U.S. diplomat said President Barack Obama has invited the Libyan rebels' National Transitional Council to open an office in Washington but stopped short of formal recognition.

The international community has stepped up airstrikes and diplomatic efforts against the regime in a bid to break a virtual stalemate, with the rebels in the east and Qaddafi maintaining his hold on most of the west.

The NATO airstrikes struck in rapid succession within a half-hour time span, setting off more than 20 explosions and sending up plumes of acrid-smelling smoke from an area around Qaddafi's sprawling Bab al-Aziziya compound in central Tripoli.

Government spokesman Moussa Ibrahim said at least three people were killed and dozens wounded in NATO strikes that targeted what he described as buildings used by volunteer units of the Libyan army.

NATO said in a statement that a number of precision-guided weapons hit a vehicle storage facility adjacent to Bab al-Aziziya that has been used to supply regime forces "conducting attacks on civilians." It was not immediately clear if the facility was the only target hit in the barrage. Bab al-Aziziya, which includes a number of military facilities, has been pounded repeatedly by NATO strikes.

At the Tripoli Central Hospital, the bodies of three men in their twenties lay on stretchers, their clothing ripped and their faces partially blown away. A nurse, Ahmad Shara, told foreign reporters taken on a government-escorted visit to the facility soon after the strikes that the men were standing outside their homes when they were killed, presumably by shrapnel.

One man who identified himself as a relative pounded a wall and cried out in despair after seeing the bodies. Some 10 other men and women were wounded.

"We thought it was the day of judgment," said Fathallah Salem, a 45-year-old contractor who rushed his 75-year-old mother to the hospital after she suffered shock. He said his home trembled, his mother fainted and the youngest of seven children screamed in terror at the sound of the rolling blasts.

"You were in the hotel and you were terrified by the shaking — imagine what it was like for the people who live in slums!" Salem told the reporters.

"Honestly, we used to have problems (with the regime)," he said in Arabic. "But today we are all Moammar Qaddafi."

The U.S. launched the international air campaign on March 19 after the passage of a U.N. Security Council resolution to protect civilians after Qaddafi sent his forces to crush the public uprising against his rule. NATO, which has taken over the airstrikes, says it has been doing its best to minimize the risk of collateral damage.

The alliance has been escalating and widening the scope of its strikes over the past weeks, increasing the pressure on Qaddafi, while many countries have built closer ties with the rebel movement that has control of the eastern half of Libya.

Jordanian Foreign Minister Nasser Judeh announced Tuesday that his country has recognized the rebels' National Transitional Council as the legitimate representative of the Libyan people and would soon name a permanent envoy in Benghazi.

Several other countries, including France and Italy, have recognized the rebel administration, while the United States, European Union and others have established a diplomatic presence in Benghazi.

Jeffrey Feltman, Assistant Secretary of State for Near Eastern Affairs, said he had delivered an invitation on Obama's behalf to the rebels to establish a representative office in Washington — a move he called "an important milestone in our relationship with the National Transitional Council."

But while he said the United States considers the council a "legitimate and representative and credible" body, he stopped short of formal recognition due to what he called the temporary nature of the council. Council members stress that they will represent Libyans only in the period until Qaddafi can be defeated and democratic elections held.

Feltman also said he expects Congress to vote soon to allow frozen regime assets in the U.S. to be used for purely humanitarian aid in Libya.

Rebel leaders welcomed the diplomatic contact, but said only better weapons will help them defeat Qaddafi.

"It is just not enough to recognize (us) and visit the liberated areas," spokesman Abdel-Hafidh Ghoga told The Associated Press. "We have tried very hard to explain to them that we need the arms, we need funding, to be able to bring this to a successful conclusion at the earliest possible time and with the fewest humanitarian costs possible."

Rebels now control the populated coastal strip in the country's east and the western port city of Misrata, which Qaddafi's forces have besieged for months. They also control pockets in Libya's western Nafusa mountain range.

In what would be a significant new deployment of firepower, French Defense Minister Gerard Longuet said Monday that France and Britain will bring in attack helicopters for use in the airstrikes. However, Britain said Tuesday that it has not made any such decision.

Harvey left open the possibility that Britain would throw helicopters into the fight, but insisted that Britain was — as of Tuesday — merely considering its options.

The use of helicopters would mark a new strategy for NATO, which has seen Qaddafi's forces adapt, often turning to urban fighting to make strikes by fighter planes more difficult.

Nimble, low-flying helicopters can more easily carry out precision strikes than jets, but they are also more vulnerable to ground fire. The alliance has had no military deaths since it began enforcing a no-fly zone on March 31.