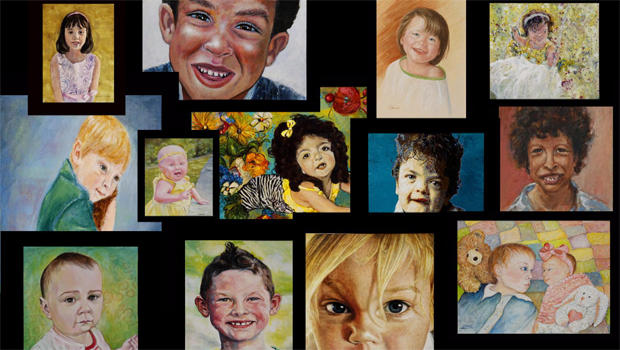 When children are dying of rare diseases that few people are working to cure, a closer look is required -- which is just what one committed artist is providing. Our Cover Story is reported by Jim Axelrod:

His name is Sam Buck. And while his high-wattage-smile and infectious laugh may remind you of a favorite nephew, there is virtually no chance you’ve ever met a kid like him.

Sam, who will turn six on Tuesday, is one of just 250 people in the world who suffer from vanishing white matter (VWM) disease -- a brain disorder that destroys white matter, a substance that helps transmit neural impulses, and leads to the loss of motor control.

There is no cure -- and the disease is typically fatal by the age of 10.

“Every birthday feels like it’s another year less that you have,” said Sam’s mother, Allyson Buck.

“’Don’t turn six, ‘cause you are getting closer to ten?’” Axelrod asked.

Allyson and her husband, Nick, have kept careful track in the three years since their son’s diagnosis, as Sam’s speech has slowed down, and his ability to walk slowly erodes -- leaving him now unable even to stand.

“I think it’s really hard for people to wrap their heads around the fact that a child as vibrant as Sam could be dying,” Allyson said.

The Bucks are trying to show Sam as much of the world as possible in the time they have left: He’s been to 30 states and 19 countries, from Mayan ruins in Mexico, to meeting his hero, Formula One race car driver Sebastian Vettel in Texas. He’s even managed to squeeze in a meeting with the Duchess of Cambridge.

“We don’t want waste all our time worrying about what’s to come,” Allyson said. “We know what’s to come. We want to be able to enjoy whatever time we have with him.”

It’s not a pretty thought, but it’s a real one for parents of kids suffering from rare diseases. Ninety-five percent of all rare diseases have no treatment options at all. With so few people suffering from them, there is no incentive for research and development of a cure.

That’s a fact not lost on Lucas Kolasa, an artist and curator of “Beyond the Diagnosis” -- a collection of intimate portraits of children with rare diseases, like Bertrand, one of the first kids Kolasa painted for the traveling exhibit.

Bertrand was the first patient ever diagnosed with something called NGLY1 deficiency. He has hundreds of seizures every day.

“When I painted the portrait, I took the wheelchair out,” Kolasa said. “And I just made him look like he was having a good day. It’s not just a picture; it’s a real person that I’m dealing with.”

“Maybe somebody will look at this and be inspired to maybe find a cure for it,” Kolasa said. “That would be awesome!”

“Beyond the Diagnosis” hopes to eventually put a face to all 7,000 of these rare diseases.

“It’s ambitious, but we’re going to do it,” said Patricia Weltin of the Rare Disease United Foundation, who hatched the idea of the exhibit. Her two daughters suffer from rare diseases.

“You can’t look at these portraits and not be moved.  You can’t,” Weltin said.

So far, they are up to 60 portraits by artists from around the world -- each hoping to do with paint what can’t be fully done by words.

“Exactly,” said Weltin. “And that was the point.”

Seventeen-year-old Austin Leclaire and his younger brother, Max, are the faces of Duchenne muscular dystrophy, a rare muscle-wasting disease often fatal by the age of 20. “I can accept that I am in a wheelchair and that’s where I am going to be,” Austin said. “Most kids my age with my disability are on death’s row. They’re basically towards the end of their lives.”

But the Leclaire brothers have more hope than most kids suffering from a rare disease. An experimental drug -- Eteplirsen -- seems to be helping. It’s not a cure, but it does seem to slow down the progression of the disease.

Austin and Max are two of roughly 100 children enrolled in clinical trials.

“I do believe that [this drug] is holding the kids from the edge of the cliff,” said Jenn McNary, Austin and Max’s mother.  She’s seen Austin able to maintain certain functions while on the drug, and regain others, like raising his arm above his head.

Max -- one of the first to get Eteplirsen -- is still walking more than four years later.

But in this world of rare disease, hope is an elusive commodity.  The path to drug approval is not an easy one, in part because the sample size is so small.

Four months ago an FDA panel recommended against approving Eteplirsen until the company provided more data that the drug actually works. If that decision becomes final, it could threaten access to the drug for the Leclaires.

“It’s almost worse to be shown something that could treat your children and then be told it could be taken away, than it is to just come to terms with having children that are ill,” McNary said.

Which brings us back to Lucas Kolasa, and the moving way he hopes to keep attention focused on rare diseases -- and pressure on researchers and regulators who may be able to provide hope. “I’m trying to do the child justice, and the family justice,” he said.

When Axelrod first met him at his gallery in Warwick, Rhode Island, he was putting the finishing touches on the portrait of Sam Buck … precise, delicate work using a syringe to form images dot by dot.

“I get pretty involved with it,” Kolasa said. “And it becomes very difficult to actually paint, because I start to fully understand what this kid is going through and what the family’s going through. And then it is no longer a portrait to me.  It’s really a personal experience.”

But even Kolasa didn’t know how personal until he brought the portrait to Sam’s family for a look.

Allyson Buck showed the painting to her son. “Who is that?”

Now “vanishing white matter” has a face. “His personality really shows through in the painting,” Kolasa said.

“Yeah, it does,” Sam’s mother agreed. “You’ve captured his joy.”

A sweet, darling face to put on a hideously cruel and destructive disease.

“Every cause needs a face,” said Axelrod.