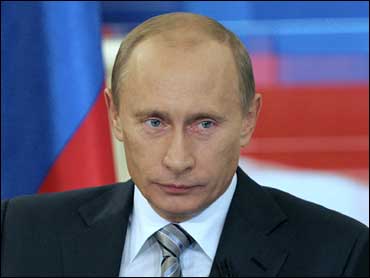 President Vladimir Putin, in his latest jab at Washington, suggested Thursday that the U.S. military campaign in Iraq was a "pointless" battle against the Iraqi people, aimed in part at seizing the country's oil reserves.

Putin has increasingly confronted U.S. foreign policy in recent months, deepening the chill between Washington and Moscow. Among other things, he has questioned U.S. plans for a missile defense system in Europe and the U.S. push for sanctions against Iran for its nuclear programs.

Putin spoke during an annual question-and-answer session with the public. Broadcast live on state-controlled TV channels and radio stations, the event consisted of people from around the country quizzing Putin on issues such as pensions, public workers' salaries and school funding.

In one question, a mechanic from the Siberian city of Novosibirsk asked the president about comments he said were made some years ago by former Secretary of State Madeleine Albright, who suggested that Siberia had too many natural resources to belong to one country.

"I know that some politicians play with such ideas in their heads," he said, dismissing the notion as wishful thinking, or "political erotica that ... hardly leads to a positive result."

"The best example of that are the events in Iraq - a small country that can hardly defend itself and which possesses huge oil reserves. And we see what's going on there. They've learned to shoot there, but they are not managing to bring order," he said.

"One can wipe off a political map some tyrannical regime ... but it's absolutely pointless to fight with a people," he said. "Russia, thank God, isn't Iraq. It has enough strength and power to defend itself and its interests, both on its territory and in other parts of the world."

Putin suggested the U.S. campaign was aimed at seizing control of Iraq's vast oil wealth, and said a concrete date must be set for the withdrawal of U.S. troops.

"I believe one of the goals is to establish control of the country's oil reserves," he said.

Unless a date for pulling out is set, Putin said, "the Iraqi leadership, feeling (safe) under the reliable American umbrella, will not hurry to develop its own armed and law enforcement forces."

Putin also reiterated his warning against U.S. efforts to put elements of a missile defense system in eastern Europe.

He said U.S. officials were genuinely considering Russian proposals to resolve the dispute. He added, however, "If a decision is made without taking Russia's opinion into account, then we will certainly take steps in response, to ensure the security of Russian citizens."

He did not elaborate on what steps Russia would take.

During the phone-in session, Putin also discussed his recent trip to Iran, which is under increasing Western pressure and scrutiny over its nuclear program.

Threats against Iran, he said, are "harmful for international relations because dialogue with states ... is always more promising. It is a shorter route toward success than a policy of threats, sanctions and, even less so, armed pressure."

Putin, who is widely popular among Russians for the stability and relative prosperity of the country during his regime, has sought to use phone-ins along with tightly choreographed, lavish television coverage to project the image of a leader responding directly to voters' concerns.

He said Thursday that Russia will have a different president next year, reaffirming his plans to step aside but leaving unclear what exact role he might have.

With just two months remaining before crucial parliamentary elections - and five before presidential elections - speculation has mounted about Putin's plans once his second, consecutive term ends in March.

"In 2008, in the Kremlin there will be a different person," Putin said. He also said he expected no radical policy changes from his successor, adding that the next president should "keep the stable course of our nation and continuity in realizing the plans that have been devised in recent years."