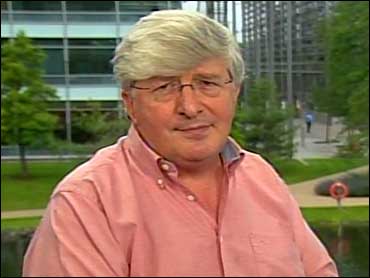 Despite all the local difficulties that we seem to be experiencing here in London, live music and live theatre is still flourishing.

There's the rebuilt and renewed Royal Festival Hall over the other side of the River Thames, with Bryn Terfel has just finished scaring the living daylights out of audiences as Sweeney Todd - The Demon Barber of Fleet Street. .... your Rhea Perlman is in town as funny as a fight in a very British farce called Boeing Boeing ... there's "Gaslight", a gripping old thriller set in fog-bound Victorian London at The Old Vic, the new musical version of "The Lord of The Rings" and a great Merchant of Venice starring John McEnery as a mesmerising Shylock.

All in all, a great time to come to London and forget the war in Iraq. Which is a small matter that the English National Opera might have considered before mounting their new blockbuster production this summer.

If you remember that splendid moment in "The Producers" when a New York audience watched, open mouthed, Bialystock and Bloom's opening number in "Spring Time For Hitler", then you'll get a sense of what it was like to sit in the stalls of the Coliseum theatre the other night for the latest lavish offering from the ENO.

Up there on the stage, the chorus was bellowing "Baghdad, don't underestimate Baghdad" and that was just the start. At one point the hero is captured by bandits and has a hood thrown over his head. Stomach churning stuff, but there was even more.

Then came a row of Baghdad Policemen, a Wazir, a harem, a Hajj in the bazaar and "Baubles, Bangles and Beads", for this is a revival of that old creaking warhorse of a musical, "Kismet". I have to tell you that a mighty talented friend of mine, Alfie Boe, stars as the Caliph in this mess and my heart bleeds for him.

For sheer bad taste and tactlessness, the mightily talented English National Opera couldn't have made a better choice. Maybe I missed the irony. I guess in a few years Mel Brooks could make a great movie out of this one, but right now and on the streets of London, "Kismet" is nothing to laugh about.
By Simon Bates