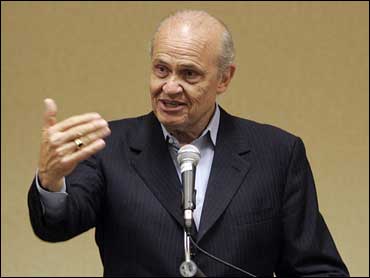 As Fred Thompson wades into the presidential campaign this week, you're certain to hear him compared to another actor/politician who landed in the White House. Sure, Ronald Reagan was "the Gipper" and Thompson is best known to millions of Americans as the tough DA Arthur Branch from "Law & Order." Reagan starred with a Chimp in "Bedtime for Bonzo," and Thompson shard the screen with an infant in "Baby's Day Out" - something that should yield a few late-night yucks.

There are other similarities. Like Reagan, Thompson casts himself as a folksy and plain-spoken conservative who seems more at home driving his red pickup truck than riding in a fancy motorcade. Reagan was often satirized as having slept his way through two terms in the White House. Likewise, Thompson has been hit with the "lazy" tag.

But there appears to be at least one glaring difference between the two, judging by what we've heard from Thompson so far (which admittedly isn't much). Reagan became his party's "Happy Warrior" with his mix of unbending principles and eternal optimism. He promised that the nation's best days were ahead of it, that is was "morning in America." Listening to Thompson in his most recent speeches, it's feeling more like dusk.

"I simply believe that on the present course that we're going to be a weaker, less prosperous, more divided nation than what we have been," Thompson told Republican activists in Indianapolis last week. "I do not say that lightly, but I think it's the truth. And I think the American people are ready for the truth."

Thompson hasn't thus far delivered the kind of performance we've come to expect from our presidential candidates. In a much-criticized speech to California Republicans last spring, he was described as being low on energy and devoid of red meat rhetoric. To be sure, there have been some flashes of inspiration. Thompson's YouTube response to film maker Michael Moore, who criticized Thompson's consumption of Cuban cigars, was a huge hit and provided a glimpse of that Hollywood touch.

The truth is, we just haven't heard that much from Thompson - but what we have heard is laced with a gloomy view of the future. "I do not think we have come together as a nation and come to terms with the length and duration and expense and commitment that it's going to take to meet the threat that we have in Islamic terrorism and radicalism," he said in Indianapolis. When it comes to fiscal policy, he predicted, "we are doing steady damage to our economy, and if we don't do things better, it's going to result in economic disaster to future generations and we are going to leave this place weaker for future generations."

Thompson aides have hinted that his message will include a realistic assessment of the problems the country faces and appear to be betting that voters will be receptive to a candidate selling a message laced with some tough love. But he'll likely need to infuse that with a little of Reagan's optimism if he wants to claim "the Gipper's" mantle. - Vaughn Ververs

Taking The Wind From Their Sails: Michigan's Democratic Gov. Jennifer Granholm signed legislation on Tuesday that will move her state's presidential primary to Jan. 15, 2008, a bid at increasing the state's influence on the nominating process. But it looks like, at least when it comes to the Democratic race, her signature may be little more than symbolic - and the efforts of Florida and Michigan to move up the calendar may be moot.

That's because, over the weekend, the three leading Democratic hopefuls - Hillary Clinton, Barack Obama and John Edwards - all pledged to abide by the nominating schedule imposed by the Democratic National Committee, which only allows Iowa, New Hampshire, South Carolina and Nevada to hold contests in January and have their delegates accepted at the party's national convention. That means that the three candidates won't be actively campaigning in Michigan or Florida, rendering the contests inconsequential.

That all three top Democrats would eschew the chance to win in diverse, delegate-rich states says a lot about the continued sway of Iowa and New Hampshire. No matter what other states do, they are determined to remain the first two contests of the '08 campaign. Evidently, the Democrats believe the bounce to be had from winning those small states is more valuable than winning what would undoubtedly be a costly contest in larger states. Plus, votes in Iowa and New Hampshire take their first-in-the-nation status seriously, and any candidate who doesn't agree with them may see their prospects suffer.

But what about the Republicans? Mitt Romney was born in Michigan - he kicked off his bid there - and has actively campaigned in Florida. Reports also indicate the Fred Thompson is putting a lot of stock in the Sunshine State's ability to help him secure the nomination. Rudy Giuliani's campaign strategy is based, in part, on performing well in larger states where his more moderate views may be appealing.

So far, none of the Republican hopefuls have pledged to stay away from Michigan and Florida, even though Republican National Committee rules say both states are in the wrong. But the RNC is only considering stripping both states of half their convention delegations - a far cry from the DNC's plan to strip offending states of all delegates. That means there's still something at stake there.

But beyond that, the circumstances facing the Republicans are the same as those facing Democrats: Competing in Michigan and Florida would both demand a lot of spending that could be better spent on winning New Hampshire and Iowa and preparing for the raft of states holding Feb. 5 contests. Strategically, avoiding the offending states seems like the best choice - and the one the Republican candidates are most likely to make, eventually. - David Miller

Clinton appeared Tuesday on Oprah Winfrey's talk show - even though the influential host has endorsed Barack Obama - and will also appear Tuesday night on "The Late Show With David Letterman" and Wednesday night on CNN's Larry King Live. While all the appearances will undoubtedly focus on Hillary's presidential bid, there's a bit of self-promotion involved, too: Clinton's new book on philanthropy, "Giving," recently hit bookstores.

It's probably no coincidence that viewers will be tuning in to see Clinton at about the same time they're tuning into the presidential race. Clinton's strong public speaking skills may help his book sales, but perhaps they'll elevate Hillary Clinton's poll numbers, too. - David Miller

And Get Off My Lawn! Before John McCain's lack of money sent his campaign into a tailspin, many of the questions surrounding the Republican's White House hopes focused on his age: If McCain were to be elected president, he would be 72 years old on Election Day, topping the previous record set by Ronald Reagan.

That fact didn't escape a high school student in Concord, N.H., who, according to the Associated Press, told McCain on Tuesday that he might be too old to be president.

The claim inspired McCain to play up the "cranky old man" stereotype and make the kind of quip he was known for when his political fortunes were brighter: "Thanks for the question, you little jerk. You're drafted." - David Miller