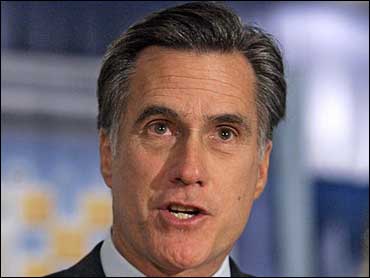 With the Iowa Straw Poll less than a week away, Republicans hoping for a win in Ames are undoubtedly feeling the pressure. But none more so than perhaps Mitt Romney, who has been the front-runner in Iowa polls for months but is now facing increased scrutiny for his views, especially on abortion, and stepped-up attacks from second-tier Republicans hoping to score an upset.

The target on Romney's back was clear from the outset of Sunday's debate in Iowa. The very first question led to a tense exchange between Romney and Sen. Sam Brownback, whose campaign has placed automated phone calls to prospective straw poll voters questioning Romney's anti-abortion credentials. That accusation — even Romney says he was "effectively pro-choice" until 2002 — has been made since Romney got into the race. But in Iowa it has now become a drumbeat.

Not surprisingly, Romney has been preparing for this assault. He had one of Sunday's biggest applause lines when said he was getting tired of "holier-than-thou" opponents criticizing his recent rightward shift on abortion. But there are some signs the pressure is starting to get to him. The former Massachusetts governor became visibly impatient with Iowa talk radio host Jan Mickelson when Mickelson said Romney's previous pro-choice position made him subject to excommunication from the Mormon faith.

The conversation between the two was at its most intense during a commercial break — while radio listeners didn't hear it, Romney's campaign has posted video of the entire exchange on YouTube. It includes Romney discussing, perhaps more frankly than we've seen yet, the connection between his religion and his political beliefs. "My religion is for me and how I live my life," he said. "My church, the leaders of my church, who I know well — and who I have been, a leader of my church — says, with the same vehemence that we have our own beliefs, we also vehemently believe other people should be able to make our own choices. So don't confuse what I do as a member of my faith with what I think should be done by government."

The Romney campaign didn't have to post the video, which includes a clearly frustrated Romney hastily leaving the studio after the interview was over. But it did, and today the video is making the rounds. The move shows that the campaign is tackling its critics head on. But on the flip side, that also shows Romney is taking its critics seriously, which indicates some level of concern about the straw poll — not long ago, a Romney victory there was considered a foregone conclusion.

Romney is really the only candidate facing serious expectations in Iowa this weekend, and what's expected of him is a win — a big one. It's still not clear if the buzz surrounding some of the second-tier candidates is backed by hype or reality. But it's obvious with the straw poll looming that tensions are rising as fast as the heat index in Ames. — David Miller

Obama Rising? Agree with him or not, Barack Obama has become the hot candidate over the past week, gaining the attention of presidential candidates from the other party as well as his own. Obama and Hillary Clinton have sparred recently over what conditions they would or would not set for a presidential-level meeting with some of the world's most shady characters. And at yesterday's Republican debate in Iowa, the Illinois senator's insistence that, as president, he would attack terrorists in part of Pakistan — with or without that nation's cooperation — triggered discussion.

That much-debated policy point allowed Romney to deliver one of the best lines of the day. "In one week, he went from saying he's going to sit down, you know, for tea, with our enemies, but then he's going to bomb our allies," Romney said. "I mean, he's gone from Jane Fonda to Dr. Strangelove in one week."

Pakistani and State Department officials have also criticized Obama's comments — but GOP candidates might want to be careful not to go too far in criticizing the Democrat. Diplomatically correct or not, Obama has managed something few in his party have been able to do effectively — highlight a glaring hole in the administration's fight against terrorism.

Democrats have tried to elevate the failure to kill or capture Osama bin Laden for the better part of the past six years. During the 2004 presidential campaign, they grew fond of referring to the al Qaeda leader as "Osama bin-forgotten." Obama's recent comments are a reminder that bin Laden has still not been taken down — and, more importantly, his terrorist organization continues on, potentially planning new attacks. Obama's position makes him look tough on terrorism, and that's the one thing Republican candidates cannot cede to Democrats in 2008. — Vaughn Ververs

It's A Recess, But No Playground: Life in Washington slows to a crawl in August as hot, muggy conditions take over and Congress skips town for a month. But this month will be an all-out blitz for some presidential hopefuls, particularly the top two Democrats, Clinton and Obama.

Both candidates have made a considerable effort to not completely abandon their Senate obligations. But while the nation's capital might be a good place to have a fundraiser or speak at the National Press Club, it's no substitute for pressing the flesh in Des Moines, Nashua, Las Vegas or Charleston.

If both of them plan on still voting regularly once the Senate returns after Labor Day, they will have to make the most of August. That said, the intensity of the race also skyrockets come September, so this month could mark the beginning of non-stop campaigning for the two instead of a mere spike in activity.

That could explain why Clinton isn't exactly starting the month on the ground running. Today, according to her schedule, she's at home in Chappaqua, N.Y., with no events scheduled. Maybe she's recharging her batteries before a five-month push to Iowa. — David Miller

By David Miller and Vaughn Ververs