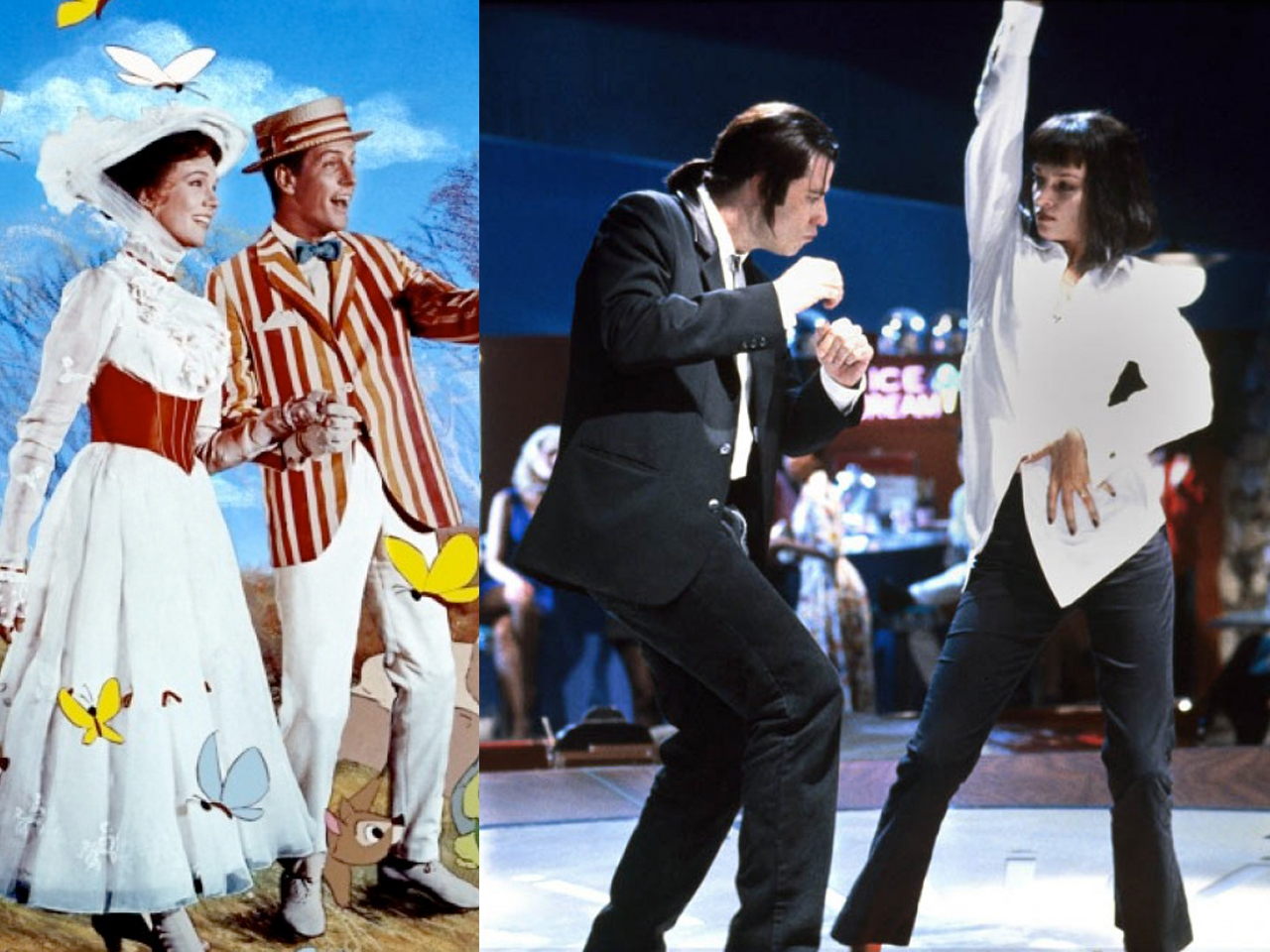 Quentin Tarantino's obscenity-spewing killers and the prim nanny Mary Poppins may have little in common, but the Library of Congress announced today they are all to be preserved for future film audiences.

The Library has named 25 films to be added to the National Film Registry, its collection of films deemed to be culturally, aesthetically or historically important. One of the most eclectic of film lists, its aim is to help protect our nation's fragile film heritage.

Also named:  "The Right Stuff," Philip Kaufman's tale of test pilots and the dawn of the U.S. space program; "The Magnificent Seven," a rousing western that was a remake of a Japanese samurai film (which was itself inspired by American westerns); "The Quiet Man," a colorful romantic drama starring John Wayne, Maureen O'Hara, and the landscapes of Ireland; and "Forbidden Planet," a spectacular example of 1950s sci-fi whose cast included Robby the Robot.

The Registry is not limited to Hollywood entertainments; documentaries, experimental films and cartoons, and student films are also on the list. Among the new ones added today are "Roger & Me," Michael Moore's tongue-in-cheek documentary about the effects of plant closures on the working class families of Flint, Mich.; and "Cicero March," a cinema verite looks at a civil rights march in a white suburb of Chicago in 1966.

Among the most historically significant films added: "The Daughter of Dawn," a 1920 drama featuring a cast of Native Americans shot on a wildlife refuge in Oklahoma; and a quartet of early dance films featuring Martha Graham.

The Librarian of Congress, James H. Billington, announced today's annual selection, bringing the number of films in the Registry to 625.

"The National Film Registry stands among the finest summations of more than a century of extraordinary American cinema," said Billington. "This key component of American cultural history, however, is endangered, so we must protect the nation's matchless film heritage and cinematic creativity."

This is particularly urgent given the deterioration of film stocks. The Library recently released a report that found 70 percent of silent films have been lost forever. Even movies made as recently as the 1970s, such as "Jaws," have required extensive restoration efforts to combat their fading colors due to unstable film stocks.

The Library accepts nominations from the public for movies to add to the Registry (visit www.loc.gov/film). Selections are made after conferring with film curators at the Library of Congress and with members of the National Film Preservation Board. The Library then works with film studios, producers and archives to preserve and protect titles on the Registry for future audiences.

Films Selected for the 2013 National Film Registry (in alphabetical order):

"Brandy in the Wilderness" (1969) - Stanton Kaye's semi-fictional 16mm diary of life with his girlfriend is a blend of autobiography narrative, fiction, and experimental editing techniques.

"Cicero March" (1966) - A cinema verite account of a civil right march in an all-white Chicago suburb.

"Daughter of Dawn" (1920) – The first film shot in Oklahoma, featuring 300 Native American cast members, was lost after a single screening in Los Angeles and recently re-discovered.

"Decasia" (2002) - Bill Morrison's found-footage compendium, with music by Bang on a Can composer Michael Gordon, blends decomposing images from decades-old nitrate film that show the impermanence of images, and of memory.

"Ella Cinders" (1926) - Colleen Moore in a comic look at a girl wishing for Hollywood stardom.

"The Hole" (1962) - John and Faith Hubley's animated short - an Oscar winner - captures the fears of nuclear annihilation in the shadow of the Cuban Missile Crisis.

"Judgment at Nuremberg" (1961) - Spencer Tracy, Maximilian Schell, Montgomery Clift, Burt Lancaster and Marlene Dietrich are among the all-star cast of this piercing drama about the military tribunal weighing civilian complicity in the Holocaust, directed by Stanley Kramer.

"King of Jazz" (1930) - Lavish set pieces, lively music (including tunes by a young Bing Crosby) and comedy skits are on the roster of this sparkling revue, shot in an early Technicolor process.

"The Lunch Date" (1989) - This Columbia University student film won a Student Academy Award for its depiction of a chance encounter between a woman and a homeless man in a train station.

"The Magnificent Seven" (1960) - Yul Brynner, Steve McQueen and Charles Bronson are among the gunslingers hired to protect a village from marauding bandits in this western remake of "The Seven Samurai."

Martha Graham Early Dance film (1931-44) - A quartet of films document the choreography of the 20th century's most influential dancers.

"Mary Poppins" (1964) - Julie Andrews won an Oscar for her performance as T.L. Travers' magical nanny in this winning mixture of live-action, animation, and music by the Sherman Brothers.

"Men & Dust" (1940) - A documentary on the respiratory effects experienced by miners in the Midwest.

"Notes on the Port of St. Francis" (1951) - An impressionist view of San Francisco, with narration by Vincent Price.

"The Right Stuff" (1983) - A rousing tale of test pilots that pushed the envelope on capturing the drama of breaking the sound barrier, and beyond.

"Roger & Me" (1989) - Michael Moore's painfully funny documentary about Flint, Mich., a city suffering from layoffs at the local auto plant, and of his attempts to interview GM's head, Roger Smith.

"A Virtuous Vamp" (1919) - Constance Talmadge as a young woman who has no difficulty breaking hearts, except the one she really, really wants, in this comedy co-written by Anita Loos.

"Who's Afraid of Virginia Woolf" (1966) - Elizabeth Taylor and Richard Burton as a highly dysfunctional couple in Mike Nichols' film of the Edward Albee play. Taylor won an Oscar for her performance.

"Wild Boys of the Road" (1933) - Depression Era teenagers take to riding freight trains cross country in search of a better life; they find lots of trouble instead.