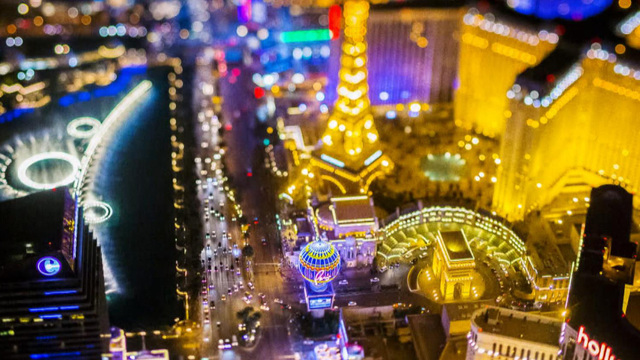 Pulitzer-prize winning photographer Vincent Laforet is no stranger to heights. He spent the last year capturing nighttime images of cities around the world, thousands of feet above the ground.

His high-altitude aerial photos - taken while harnessed in a helicopter - are the subject of his new book called, "AIR."

Laforet described the photos as "magical."

"I think when you're in the middle of Fifth Avenue, you feel pretty small and insignificant - you see all of our differences. But when you're up there, the world feels much smaller, it feels much more within the reach and somehow you feel more connected ironically," Laforet said on "CBS This Morning" Monday.

"AIR" captures breathtaking views of more than 10 of the world's most iconic cities, including New York, Chicago, London, Barcelona, and more. NASA has called his photos "the next best things to being in an orbit." But Laforet said the photos are also indicative of the changing times.

"A lot of these cities are changing their grid patterns to more LED lighting that are bluer and you can see the different tones in the photographs," he said. "So had this been done two or three years ago, first of all the cameras couldn't have done it, and the cities would have looked yellow... so it's kind of the perfect storm right now to do it."

Whereas most choppers might hover a few hundred feet above the ground, Laforet asks his pilots to take him up to altitudes helicopters rarely fly -- as high as 11,000 feet. But he hasn't completely overcome his fear of heights.

"If I see anything beneath my hips, if I go to the side, I get nervous. I feel much more uncomfortable in a commercial airliner," said Laforet. "But in a helicopter, it's like a magic flying carpet, it's really relaxing."

Still, there are other challenges. When shooting in Las Vegas, Laforet had to make an emergency landing in the pitch black desert after both of his legs fell asleep and experiencing a high proxy - a lack of oxygen to the brain - from being 12,000 feet in the air for too long.

"It's one thing to prop both your legs out and to have faith in that equipment to hold you in," he said, which he also compared to "100,000 pieces of metal trying to shake itself loose from one another."

To make up for the shakiness, Laforet said he "absolutely pushes the technical limits," using slow shutter speeds, gyroscopes and the "best lenses in the world."

The 25-year veteran photographer was also a New York Times staffer for seven years, and has photographed everything from the Olympic Games to his 2002 Pulitzer-winning photography of post-9/11 events overseas. But he said the high-altitude photos of cities around the world were "mind-blowing."

"Everyone has a camera on their phone so it's really hard to find an image no one's seen before," Laforet said. "The pilots and myself, all over the world, our jaws would drop. We'd say, 'Wow, I actually never saw this.' I'm getting goosebumps right now because you rarely get to discover anything anymore."

The photos are also personal for Laforet.

"It felt like a body of work that I was just naturally called to do," he said. "It's changed my life in that it allowed me to touch back with that thing that got me started when I was 15 years old, which is the love of capturing an image I've never seen before."