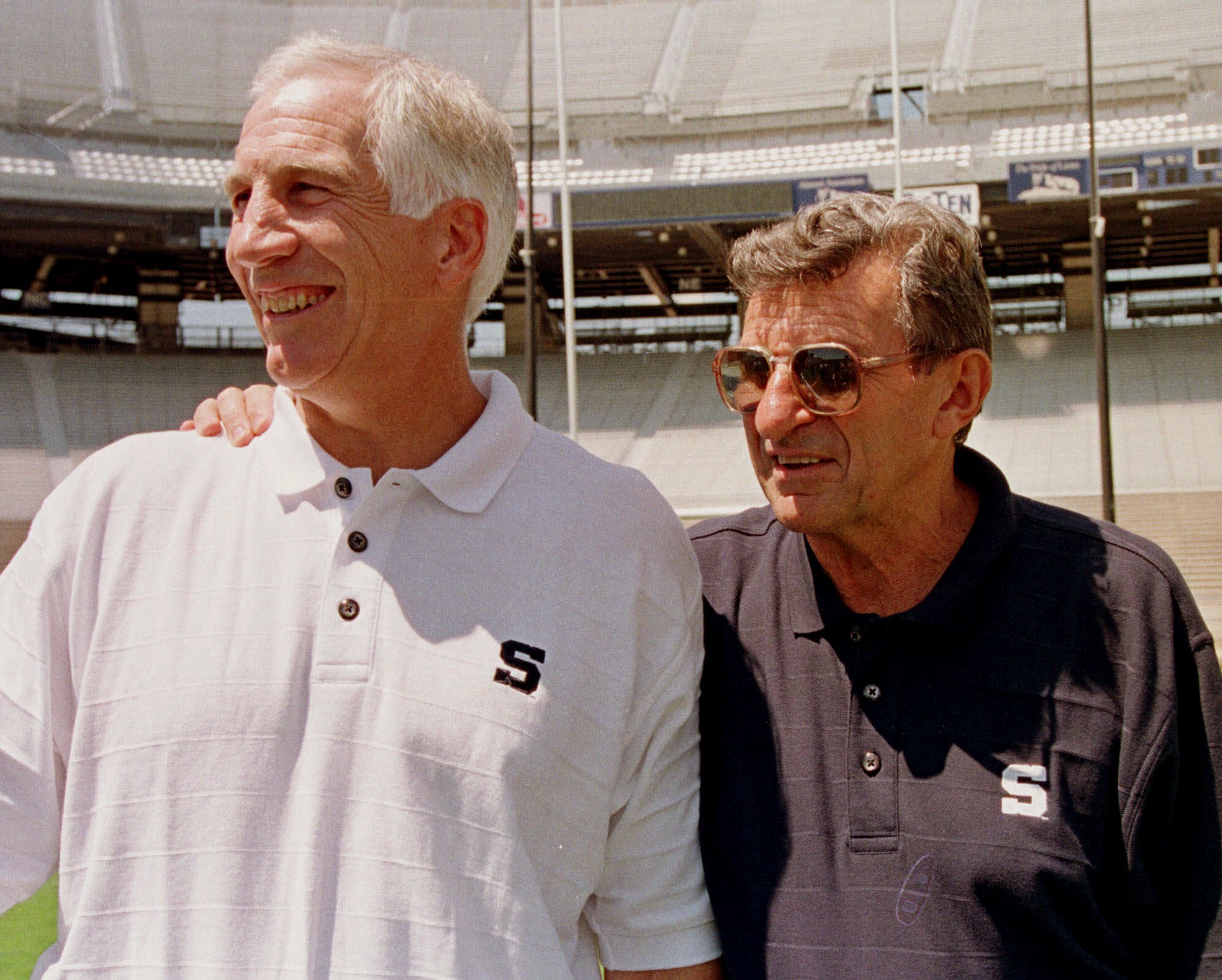 STATE COLLEGE, Pa. — Penn State trustees say they decided to oust Joe Paterno in part because the football coach didn't meet a moral obligation to do more to alert authorities about a child sex abuse allegation against a retired assistant coach.

Trustees interviewed Thursday by The Associated Press also cited statements from Paterno in the days and hours leading to his dismissal Nov. 9 — after nearly a half-century of leading the Nittany Lions — that they felt challenged the Board of Trustees' authority. Board members saw that as inappropriate, particularly at a time of intense scrutiny over the case of former defensive coordinator Jerry Sandusky.

Sandusky was charged with dozens of child sex abuse counts four days before Paterno was pushed out. The head coach had testified before a state grand jury about a 2002 allegation against Sandusky that was passed on to him by a graduate assistant.

Paterno told The Washington Post for an article published over the weekend that he had no idea of a possible dark side to his longtime assistant coach Jerry Sandusky and was "shocked and saddened" by the abuse charges engulfing his beloved university.

A day after the graduate assistant, Mike McQueary, came to see him, Paterno relayed the accusations to his superiors, one of whom oversaw campus police. Board members didn't think that was enough.

"There's an obligation, a moral responsibility, for all adults to watch out for children, either your own or someone else," trustee Mark Dambly said. "It was in our opinion that Joe Paterno did not meet his moral obligation and for that reason — me, personally for that reason, I felt he could no longer lead the university and it was unanimous."

Video: Paterno says he didn't know how to handle sex abuse
Paterno: I didn't know which way to go

But Dambly and three other trustees interviewed Thursday on the Penn State campus said they still intended to honor Paterno's accomplishments and contributions to the school. He won a Division I record 409 games over 46 seasons and the Paterno family has donated millions of dollars to the school.

"Obviously Joe Paterno is a worldwide icon and has done a tremendous amount for the university," trustee Joel Myers said. "We have sorrow and all kinds of emotions, empathy, sympathy for what has occurred. That's universal.

"But the university, this institution is greater than one person."

The trustees spoke out ahead of Friday's board meeting, their first gathering since November and the frantic week after criminal charges were filed against Sandusky, once heralded as the architect for the storied program's "Linebacker U." defense.

The trustees described the long deliberations in the days leading up to Paterno's ouster as emotional and nerve wracking, echoing the confusion and anguish also felt among students and alumni as the scandal unfolded. They were shocked by the lurid details that had emerged about the case that week, after having been given a short briefing about Sandusky months earlier by school President Graham Spanier and general counsel Cynthia Baldwin. That session lasted roughly 7 minutes and provided few insights, trustees said.

Paterno was dismissed the same day Spanier also departed under pressure. The board initiated an internal investigation into the Sandusky case and the role of Penn State officials.

Since then, some alumni and former players have been questioning the actions of the trustees. The criticism boiled over in three town hall-style meetings last week hosted for alumni by new school President Rodney Erickson.

According to Dambly, trustees had been advised not to speak because of the ongoing investigations but changed their minds following the town halls.

They began a series of interviews this week with media outlets. Also sitting in Thursday's interview with the AP was Lanny Davis, a prominent Washington attorney who has been retained by Erickson and the trustees as an adviser.

"It was clear that the alumni, students, faculty and general public were asking questions of the president that he was unable to answer," Dambly said. "We determined as a group that the Board of Trustees needed to answer the questions of what we knew, when we knew it and why we made the decisions that we made."

The trustees on Thursday cited three reasons for Paterno's immediate removal as head coach. Besides the moral obligation to do more in conjunction with reporting the 2002 allegation and statements issued by Paterno they felt may have challenged trustees' authority, the trustees also said there was concern that Paterno would not be able to properly represent the school if allowed to stay on as head coach the rest of the 2011 season.

On Nov. 6, as trustees began to arrive in State College in the wake of Sandusky's arrest, some were surprised by a statement from Paterno made without consulting the university, trustee Stephanie Deviney said. At the time, Paterno's son, lawyer Scott Paterno, had been also speaking on behalf of his father.

"When we're in the biggest crisis of this university, we all should have been coming together, and at that point we working separately," Deviney said.

In a statement the morning of Nov. 9 that caught the school off-guard, Paterno announced he was retiring effective the end of the year. At the time, Paterno said he was devastated by the case, and that the trustees should "not spend a single minute discussing my status" and had more important matters to address.

"This is a tragedy," Paterno said then. "It is one of the great sorrows of my life. With the benefit of hindsight, I wish I had done more."

Following a two-hour meeting later that night in which Dambly said the trustees came to a consensus, vice chair John Surma had an assistant athletic director relay a message to Paterno's home to call him. By then, a large crowd of students and media were outside Paterno's house.

According to The Washington Post, Surma told Paterno, "In the best interests of the university, you are terminated." Paterno hung up and repeated the words to his wife, who redialed the number.

According to Davis on Thursday, Surma never got the chance to say two more things that night: that he regretted having to tell him the decision over the phone; and that the school was going to honor his contract and retirement package as if he had retired at the end of 2011.

Dambly insisted Paterno was not fired, although he never appeared as coach again. He remains a tenured faculty member, Dambly said.

Spanier, too, remains a tenured faculty member and is on sabbatical. The school has said that he had resigned, but trustees Thursday said his contract as president had been terminated.

With Spanier in attendance, general counsel Cynthia Baldwin had briefed the board about the grand jury investigation into Sandusky in May. Recounting the briefing, Dambly said Thursday trustees were led to believe the investigation was related to Sandusky's charity for at-risk youth, The Second Mile, or activities in Lock Haven, a small town about 45 minutes north of State College.

Authorities have said Sandusky met his accusers through the charity.

Trustees typically get briefed on legal matters. The case was not presented in a way "as anything we should really be concerned about," Myers said. Trustees said they learned the details with the rest of the public on Nov. 5: through newspaper, broadcast or online accounts.

The next day Spanier offered more details. He issued a statement calling the allegations troubling and adding that athletic director Tim Curley and vice president Gary Schultz had his unconditional support.

Scultz and Curley are awaiting trial after pleading not guilty to charges of perjury and failing to report the 2002 allegation to authorities. Curley is on administrative leave, while Schultz, whose department oversaw campus police, returned to retirement.

By Nov. 7, Spanier's support on the board had eroded, Myers said.

"It was very emotional. How could this have happened," Myers said in recounting the deliberations and initial reaction to the allegations. "This is the antithesis of what the university stood for."

"Blaming Joe Paterno for the failure of administration officials and the board to properly investigate Jerry Sandusky is unjustified," Paterno's lawyer, Wick Sollers, said in a statement to The New York Times.

In another statement, the group Penn Staters for Responsible Stewardship said the board's comments have "done nothing but raise additional questions." The group started in mid-November, growing out of what a spokeswoman said was a common frustration among members over a lack of due process at the school.

"We can conclude, that consequently, their hasty and panicked damage control efforts in the first days of November, and the uncomfortable position they found themselves in, being caught flat-footed, instead of in a proactive leadership position, led to the unjust firing of Joe Paterno, without so much as a conversation, let alone complete due process," the group's statement said.

Other critical alumni have called for wholesale changes in the board's makeup, and more transparency into how the board operates.

Dambly said he hoped critics would look at the trustees' recent comments objectively "and that will I think to 90 percent to 99 percent of the world answer a lot of those questions."

The board is also expected to address the topic at the meeting Friday.