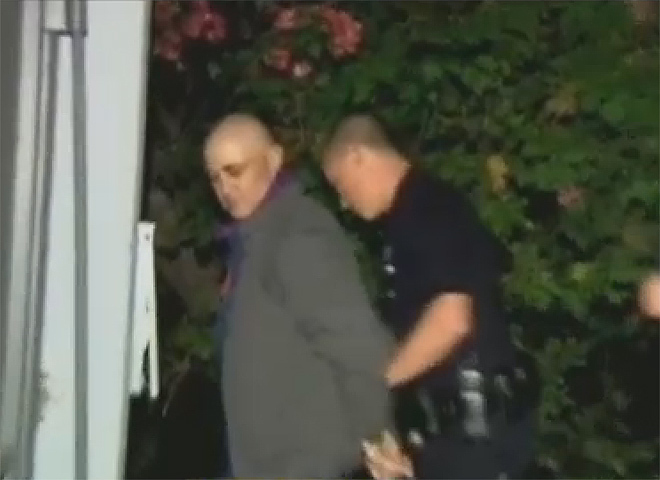 (CBS/AP) LOS ANGELES - A man allegedly clutching a pair of scissors was arrested after police say he tried to force himself inside the Los Angeles home of Miley Cyrus.

Los Angeles police Lt. Brian Wendling said that employees inside Cyrus' house in the Studio City area called police around 4 a.m. Saturday, after the man came to the door and claimed to be a friend of the 19-year-old singer-actress.

CBS Station KCBS correspondent Louisa Hodge reports the man then started to light candles, before repeatedly throwing himself against an outside wall as if he was trying to break into the house.

Cyrus was not home at the time.

Police say the man jumped behind some bushes and tried to flee, but complied after he was threatened by a Taser gun.

The man, whom Hodge reports identified himself as Jason Luis Rivera, was carrying a pair of nail clipper-like scissors. Video from the scene shows police on scene arresting the suspect, who was wearing a heart-shaped ornament made of rope over his chest.

According to police, Rivera has an extended criminal history and is not from the area.

Rivera was arrested on suspicion of trespassing and possibly burglary, Hodge said.

Last month police responded to a report of a possible robbery or home invasion at Cyrus' home. Officers later determined it was a false alarm.