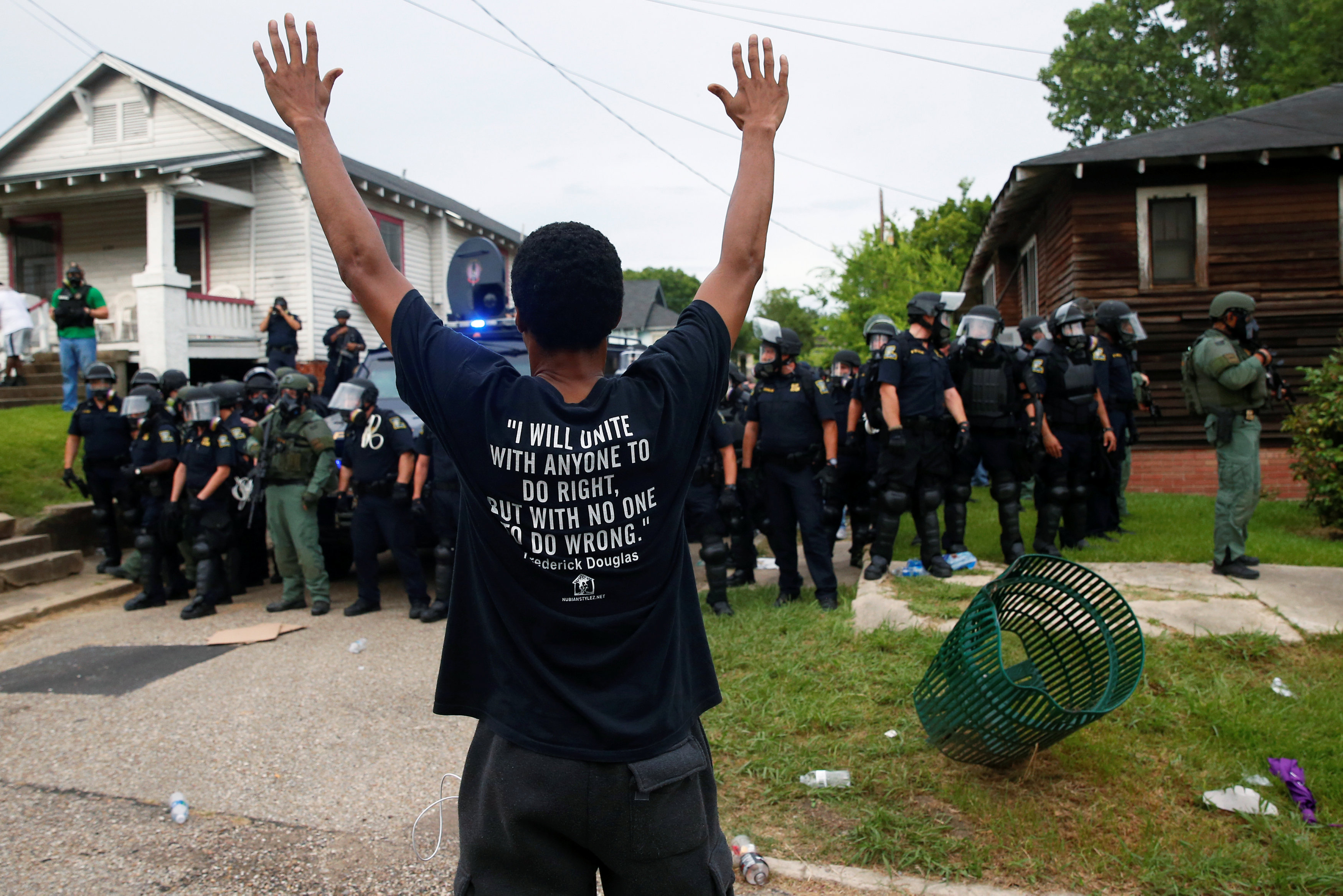 Tensions between black citizens and police have risen palpably over the past week or so amid the police shootings of African-American men and the gunning down of five white police officers by a black suspect in Dallas.

There was no initial police presence and protesters told the station they intend to remain peaceful.

Earlier Sunday night, officers stared down hundreds of shouting protesters near a ramp onto Interstate 110 in Louisiana's capital before another squad in riot gear arrived to make arrests.

"They didn't have any problems out there. They seemed to be very organized and peaceful," Cain said.

But as night began to fall, a few hundred people aimed for an on-ramp, trying a tactic protesters were using this weekend in multiple cities.

And after a lengthy standoff, more police in full riot gear moved in, pinning some of the protesters as others fled. Some 30 to 40 people were jailed for trying to block a highway, sheriff's spokeswoman Casey Rayborn Hicks said.

That pushed Baton Rouge's weekend arrest total above 160, with just one reported injury to a police officer.

Gov. John Bel Edwards said he's "very proud" of the Louisiana law enforcement response to protests over the fatal shooting of a black man by white police officers in the city.

Flanked by law enforcement leaders, Edwards said he doesn't believe officers have been overly aggressive by using riot gear to push protesters off a highway.

"The police tactics in response have been very moderate. I'm very proud of that," said the Democratic governor, who comes from a family of sheriffs.

The Baton Rouge police spokesman, Sgt. Don Coppola, blamed some violence and the large number of arrests on outside agitators. One officer lost teeth to a projectile thrown outside police headquarters, and police also confiscated three rifles, three shotguns and two pistols during that protest, he wrote in an email.

"It appears the protest at Baton Rouge Police Headquarters have become more violent as out of town protesters are arriving," he said.

But most of those detained live in Louisiana and faced a single charge of obstructing a highway, sheriff's spokeswoman Hicks told The Associated Press.

The protesters were demonstrating against Tuesday's shooting death of Sterling, 37. The Department of Justice has opened an investigation into his death, which has angered many in the black community.

One of those arrested on Saturday was Black Lives Matter leader DeRay McKesson, Begnaud reported. McKesson was apparently streaming live on social media when he was arrested.

He was released Sunday afternoon.

On the heels of a violent protest in St. Paul Saturday night, there was another rally and march in the Twin Cities Sunday afternoon, CBS Minnesota reported.

Late Sunday afternoon, a group of protesters marched up and down Silver Lake Road in the north metro. It started as a rally at the St. Anthony Police Department earlier in the afternoon. That's where the officer who shot Philando Castile works.

The rally wrapped up at about 5 p.m. back near the St. Anthony police precinct.

"On behalf of myself and our entire family, we urge all people to remain peaceful in all demonstrations throughout our community and our nation," she said. "When demonstrations become violent, it disrespects my son and his memory. Philando was a man of peace and dignity. Please, I ask you to at all times remain peaceful in your expressions of concern regarding his death at the hands of the police. I promise that we will not rest until justice prevails."

Protesters also gathered in other major cities across the U.S. on Sunday evening for the fourth straight night in a row.

Atlanta Streetcar temporarily suspended their service due to high traffic in downtown Atlanta.

On Saturday, eleven people were arrested in downtown Atlanta during demonstrations.

In Memphis, Tennessee on Sunday night, a group marched across the city and onto the I-40 bridge.

It started as a peaceful rally at FedExForum with hundreds of people, CBS affiliate WREG reported.

Interim Police Director Michael Rallings was also at the rally, and things heated up when protesters interrupted him.

After rallying at FedExForum, the crowd marched to police headquarters and then continued on, with more people joining them as they went on.

The marchers attempted to go to the I-40 bridge, but police blocked the entrance to the bridge. They eventually found a way onto the bridge via the exit ramp, and police had trouble stopping them.

Traffic was forced to a standstill, and the bridge was closed as police ordered the protesters to exit.

Police said they have everything under control, but advised the public to avoid the downtown area, WREG reported.

Hundreds of demonstrators marched across the six-city Hampton Roads, Virginia, area as part of a coordinated effort to speak out against violence by police against blacks.

Blacklivesmatter757 organized the protests. The organization called for protesters to shutdown streets in Hampton, Norfolk, Newport News, Chesapeake and Portsmouth and the waterfront in Virginia Beach on Sunday evening.

Video from the scene in Newport News shows protesters on a street corner holding signs and chanting "no justice, no peace" and "black lives matter." Some marchers spilled into the street blocking traffic as police cars stood by.

Blacklivesmatter757 uses the Hampton Roads area code to mark its affiliation with the national group.

In New York, protests also continued for the fourth night in a row.

The crowd of about 300 people started in Times Square on Sunday. Between short speeches, they stood silently, holding signs saying "Black Lives Matter." Some had their fists in the air.

They left in a silent march, making their way south to Bryant Park and then to Herald Square. At Bryant Park, young children who had been brought to the march were showcased as the lives demonstrators were marching to protect.

Jashaun Sadler of Ridgefield Park, New Jersey, brought his 6-year-old twins to the demonstration. He says it's "unspeakable" to think of them growing up in a world "where their skin color could make the difference between life and death."

CBS New York reported that the NYPD arrested 20 protesters throughout the city Saturday when the demonstrations became dangerous.

The FDR Drive was shut down by protesters as they made it onto major roads.

"People here are fighting for justice for all in a country that promises it," one protester said.

The fight against police brutality could be seen throughout the area and across the country overnight.

"If only black lives did matter, we wouldn't have to say it," one protester remarked.

The family of Delrawn Small, who was killed last week by an off-duty officer in Brooklyn, was calling for reform in the criminal justice system.

"It's not about me, it's not about any of us as individuals," Zayanahla Vines, Small's nephew, said. "It's about us, what's going on with my people, our people. It needs to stop, something needs to change."

On Monday morning, six chapters of "Showing Up for Racial Justice" -- a national network of groups and individuals organizing white people for racial justice -- will engage in nonviolent direct action together in order to call for immediate changes to policing in the U.S., according to a statement from the group.

The activists in Fairfax, Virginia, Philadelphia, Pennsylvania, Portland Oregon, Madison, Wisconsin, Louisville, Kentucky, and Hudson, New York, say they will demonstrate against police violence, with more cities to follow later in the week.