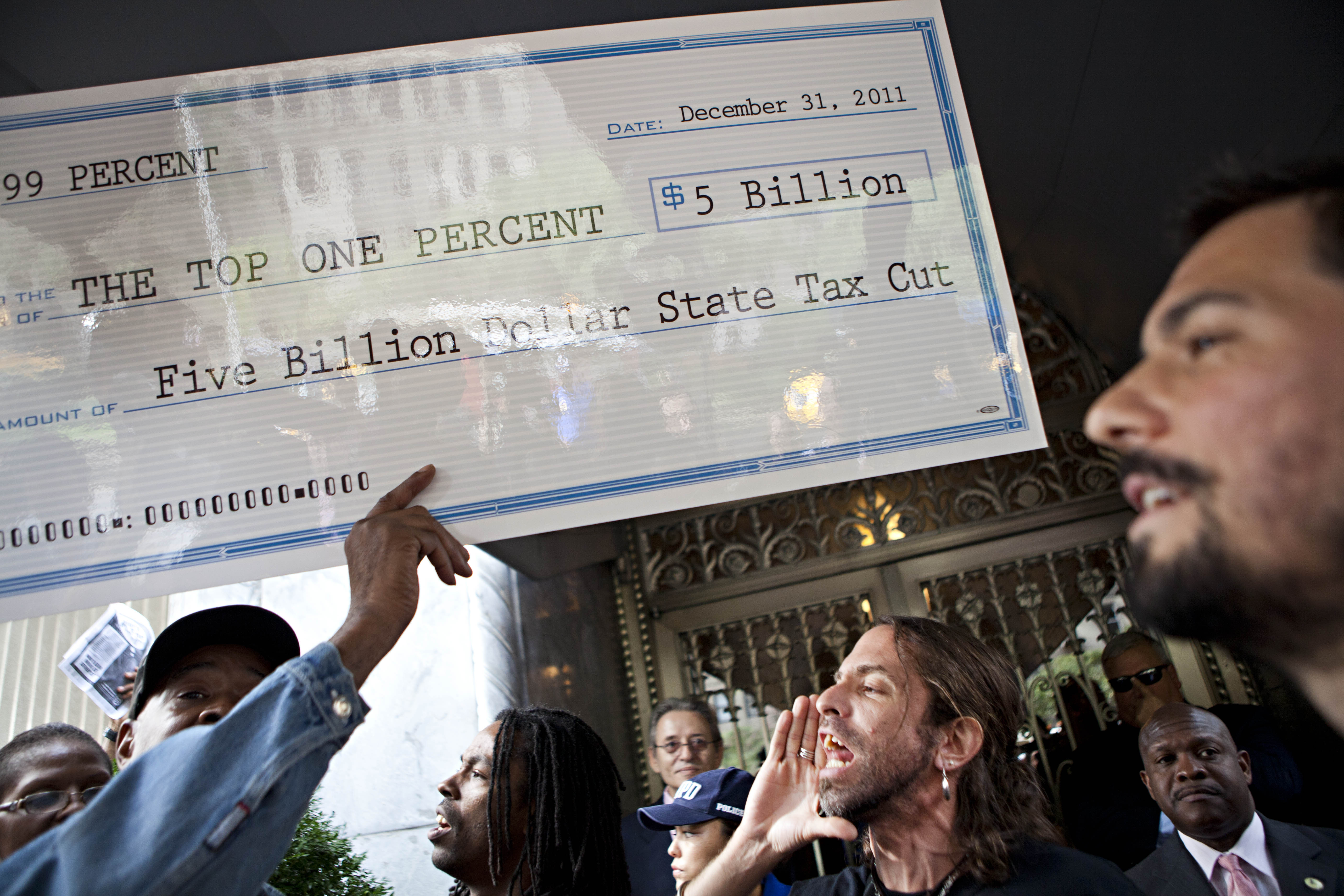 NEW YORK - Hundreds of protesters, emboldened by the growing national Occupy Wall Street movement, streamed through midtown Manhattan on Tuesday in what they called a "Millionaires March."

They marched two by two up the sidewalk, planning to pass the homes of some of New York City's wealthiest residents. An organizer said they didn't have a permit and wanted to avoid blocking pedestrian traffic.

"No Billionaire Left Behind," said a placard hoisted by Arlene Geiger, who teaches economics at Manhattan's John Jay College of Criminal Justice.

Protesters expressed concern about how much less the wealthy will pay — and who would be negatively affected — when New York's 2 percent "millionaires' tax" expires in December.

Protesters have been camped out for weeks in lower Manhattan's Zuccotti Park, near Wall Street, saying they're fighting for the "99 percent," or the vast majority of Americans who do not fall into the wealthiest 1 percent of the population.

Their causes range from bringing down Wall Street to fighting global warming. The movement gained traction through social media, and protests have taken place in several other cities nationwide.

In Boston, hundreds of college students marched through downtown Boston on Monday and gathered on Boston Common, holding signs that read "Fund education, not corporations."

The protesters are angry with an education system they say mimics "irresponsible, unaccountable, and unethical financial practices" of Wall Street.

About 50 protesters in Boston were arrested overnight after they ignored warnings to move from a downtown greenway near where they have been camped out for more than a week, police said.

Several hundred protesters were arrested in New York more than a week ago after police said they ignored warnings to stay in place. There was no word on any arrests in Tuesday's protest in New York.

The protest comes as New York Comptroller Thomas DiNapoli released a report showing that Wall Street is again losing jobs because of global economic woes, threatening tax revenue for a city and state heavily reliant on the financial industry.

"Excessive risk-taking on Wall Street was a major factor leading to the financial crisis and the recession," DiNapoli said. "Regulatory changes that reduce risk and focus attention on long-term profitability rather than short-term gains will enhance stability."

"That means more people on our side," said Guerra, who calls himself an Eisenhower Republican but says he's opposed to today's corporate behavior. "The companies are destroying this country by helping themselves, not the people, and pushing jobs out of America.

"If they get shafted, they will realize that what we are saying is true."

The protesters continue to gather support, with sympathy demonstrations underway across the country, and some unions joining their rallies, which were not without incident:

Boston: More than 100 protesters from the Occupy Boston movement were arrested early Tuesday after they ignored warnings to move from a downtown greenway near where they have been camped out for more than a week, police said.

Boston resident Matt Hollander, 25, said a group of veterans carrying American flags were standing in between police and the protesters when officers advanced on them. One veteran, he said, was pushed to the ground and a group of protesters fell in a heap.

"If they wanted to arrest us they could have done that without pushing us...without tramping the flag," Hollander said.

Chicago: Thousands of protesters - consisting of Occupy Chicago demonstrators and members of labor groups, the Chicago Teachers Union and other organizations - flooded downtown Chicago at five different locations Monday to participate in simultaneous marches to "Take Back Chicago."

At least one arrest was reported and several participants were ticketed, CBS Station WBBM reported, but overall the demonstrations were orderly.

The march converged on the sites of two banking conferences - the Mortgage Bankers Association Convention and Expo, and the Futures and Options Expo.

Cincinnati: For a second night, Occupy Cincinnati protesters have accepted citations and fines rather than leave a downtown park. About two dozen demonstrators lined up late Monday at Piatt Park to receive their tickets from police. Citations that come with $105 fines were given to roughly the same number Sunday night.

Des Moines: A day after 32 Occupy Iowa protesters (including two juveniles) were arrested for camping out on the grounds of the Iowa Statehouse, demonstrators have moved their encampment across the street, and will request a permit to stay (grounds must be cleared of visitors by 11 p.m.) rather than face further trespassing arrests.

Atlanta: At least 100 protestors are defying city ordinances that prohibit camping in downtown's Woodruff Park. As of Tuesday morning, police have made no arrests.

The group is planning a march Tuesday to the Bank of America building.

Colorado: Tent camps of protesters have appeared near the State Capitol in Denver and in Colorado Springs.

San Diego: A man jumped to his death from a multi-story parking structure at Civic Center Plaza, near the site of an Occupy San Diego demonstration. Police ruled the man's death a suicide and said he was not part of the protest. One protester who witnessed the man's fall told CBS Affiliate KFMB it was "just horrible."

Seattle: Participants in the Occupy Seattle protest in downtown Westlake Park have been warned by police that the park is closed and that they face arrest if they do not leave. Last week police arrested about two dozen demonstrators.

Washington, D.C.: Officials with the National Park Service offered a coalition of anti-war and anti-corporate greed protesters - who were facing arrest yesterday when their permit to camp out in Freedom Plaza expired - with a demonstration permit extension in a meeting with representatives of protesters.

"I never dreamed we would have a four-month extension," said Margaret Flowers, one of the demonstration's organizers who met with the Park Service. She called the offer a "transformative moment."

Despite the extension, questions remain about logistics, such as food and showers for the group. There are also questions about the extent to which authorities will continue to tolerate camping in the plaza.

The demonstration, organized to coincide with the 10th anniversary of the start of the war in Afghanistan, was formed under the title "October 2011/Stop the Machine." There have been discussions about merging with the Occupy DC protesters who have been demonstrating up the street. The groups have said they support each other but are independent.

But NYSE spokesman Ray Pellecchia said an investigation by the stock exchange showed no disruptions to its website.

What began as a protest in lower Manhattan's Financial District has morphed into a self-operating mini-community, with a complimentary breakfast buffet of fresh fruits and bagels.

CBS News correspondent Bigad Shaban got an inside look at the protesters' camp in Zuccotti Park and found, this isn't your average protest.

At the tent village set up by the demonstrators, yoga classes are taught in "off" hours. A makeshift library has at least 1,500 books. The camp even has a medical tent, and its own newspaper, The Occupy Wall Street Journal.

WCBS reports that the protest - now in its fourth week - has divided businesses in the Wall Street area. Some are deeply frustrated by the steady stream of protesters who come in to use their facilities.

"They want to take showers, want to wash up and use the toilet paper to dry up. It becomes... you gotta have one person assigned just to clean the bathrooms," said Steve Zamfotis, manager of Charley's Restaurant. "They expect everything, everything for free, nothing to pay."

Other area businesses take a different view: "Oh, no problem," said Alfonso Alfi, manager of Pronto Pizza. "We let them use the bathroom because all the fancy places close the bathrooms for them."