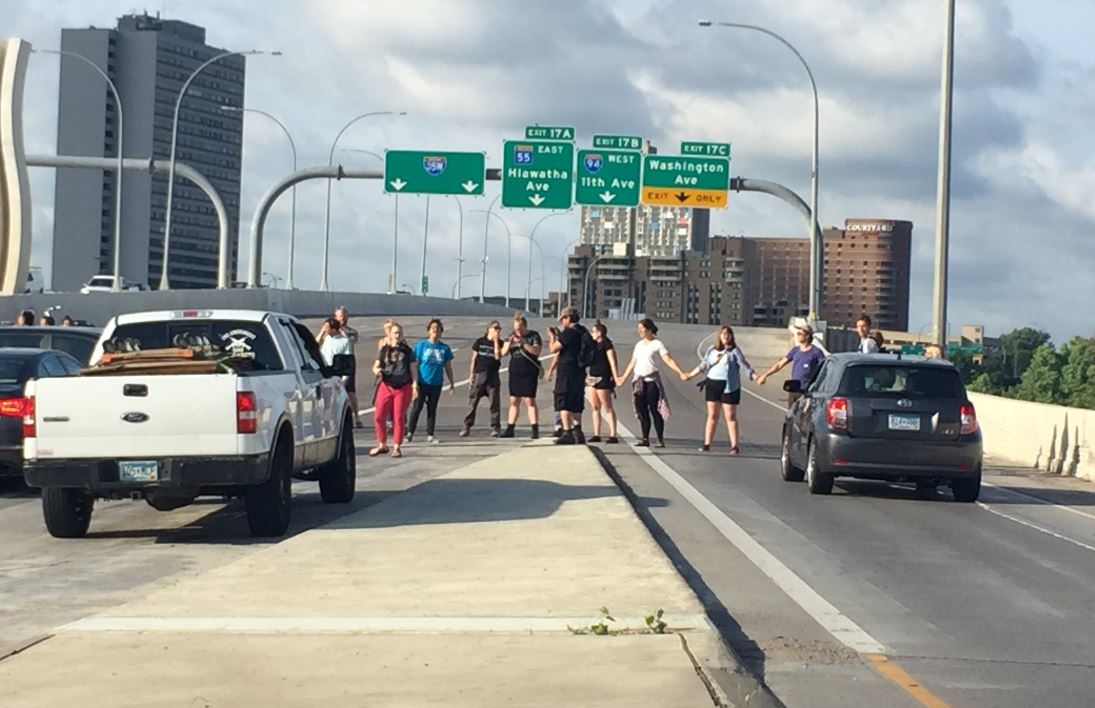 About three dozen protesters blocked the roadway near University Avenue Wednesday morning before state troopers moved in, arrested them and put them on a bus.

Castile was shot and killed last week by St. Anthony police officer Jeronimo Yanez during a traffic stop in Falcon Heights, in an incident that was caught on video and helped spur the recent spate of nationwide protests against police violence.

Many protest groups have taken to shutting down major highways. In Minnesota, Black Lives Matter protesters upset over the fatal shooting of Jamar Clark employed the same tactic, shutting down Interstate 94 for a while, a move that also led to dozens of arrests.

Minnesota Department of Transportation shut down I-35W at University Avenue near Lauderdale for a while, leading to delays of around 90 minutes.

The group of white and non-black people of color, which CBS Minnesota reports call themselves the "Coalition to Wake Your Ass Up," released a statement following the shutdown, saying in part that they condemn the ongoing killing of black lives across the country.

The statement read in part: "The coalition...believes this shut down reinforces our belief that comfort and business as usual must be disrupted until substantive changes occur in our city and throughout the country. We support community-led alternatives, solutions, and programs to protect our communities. On this day, we support the workers attempting to make a living but we also know that sacrifices must be made if we hope to live decently together."

Almost all of the protesters had been taken into custody. No accidents or injuries have been reported.

Protesters have also been holding a vigil at the Governor's Residence in St. Paul since last Thursday.

On Tuesday, Officer Yanez's lawyer said his client pulled Castile over in part because he believed he resembled a suspect in a robbery.

Philando Castile had no felony record and authorities have not said he was a suspect in any crime.

But attorney Thomas Kelly tells the Star Tribune newspaper that Officer Jeronimo Yanez thought 32-year-old Castile looked like someone police had been seeking in a recent robbery.

Castile's girlfriend and her young daughter were in the vehicle. His girlfriend has said Castile was reaching for his wallet when he was shot, after telling officers he had a gun and a permit for it. The woman filmed the aftermath of the shooting live on Facebook.

A Minnesota medical examiner ruled Castile's death a homicide. The shooting has led to days of protests throughout Minnesota and the country.

Kelly told The Associated Press that Yanez was reacting to the seeing that gun when he drew his own weapon.