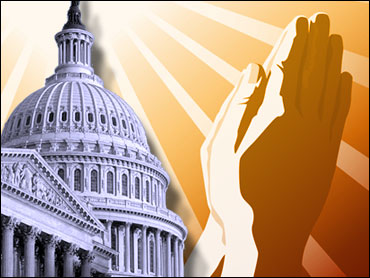 A Hindu clergyman made history Thursday by offering the U.S. Senate's morning prayer, but only after police officers removed three shouting protesters from the visitors' gallery.

Rajan Zed, director of interfaith relations at a Hindu temple, gave the brief prayer that opens each day's Senate session. As he stood at the chamber's podium in a bright orange and burgundy robe, two women and a man began shouting "this is an abomination" and other complaints from the gallery.

Police officers quickly arrested them and charged them with disrupting Congress, a misdemeanor. The male protester told an Associated Press reporter, "we are Christians and patriots" before police handcuffed them and led them away.

For several days, the Mississippi-based American Family Association has urged its members to object to the prayer because Zed would be "seeking the invocation of a non-monotheistic god."

Zed, the first Hindu to offer the Senate prayer, began: "We meditate on the transcendental glory of the Deity Supreme, who is inside the heart of the Earth, inside the life of the sky and inside the soul of the heaven. May He stimulate and illuminate our minds."

As the Senate prepared for another day of debate over the Iraq war, Zed closed with, "Peace, peace, peace be unto all."

Zed, who was born in India, was invited by Senate Majority Leader Harry Reid, a Democrat. Speaking in the chamber shortly after the prayer, Reid defended the choice and linked it to the war debate.

"If people have any misunderstanding about Indians and Hindus," Reid said, "all they have to do is think of Gandhi," a man "who gave his life for peace."

"I think it speaks well of our country that someone representing the faith of about a billion people comes here and can speak in communication with our heavenly Father regarding peace," said Reid, a Mormon and sharp critic of President Bush's Iraq policies.

Barry W. Lynn, executive director of Americans United for Separation of Church and State, said the protest "shows the intolerance of many religious right activists. They say they want more religion in the public square, but it's clear they mean only their religion."

Police identified the protesters as Ante Nedlko Pavkovic, Katherine Lynn Pavkovic and Christan Renee Sugar. Their ages and hometowns were not available.