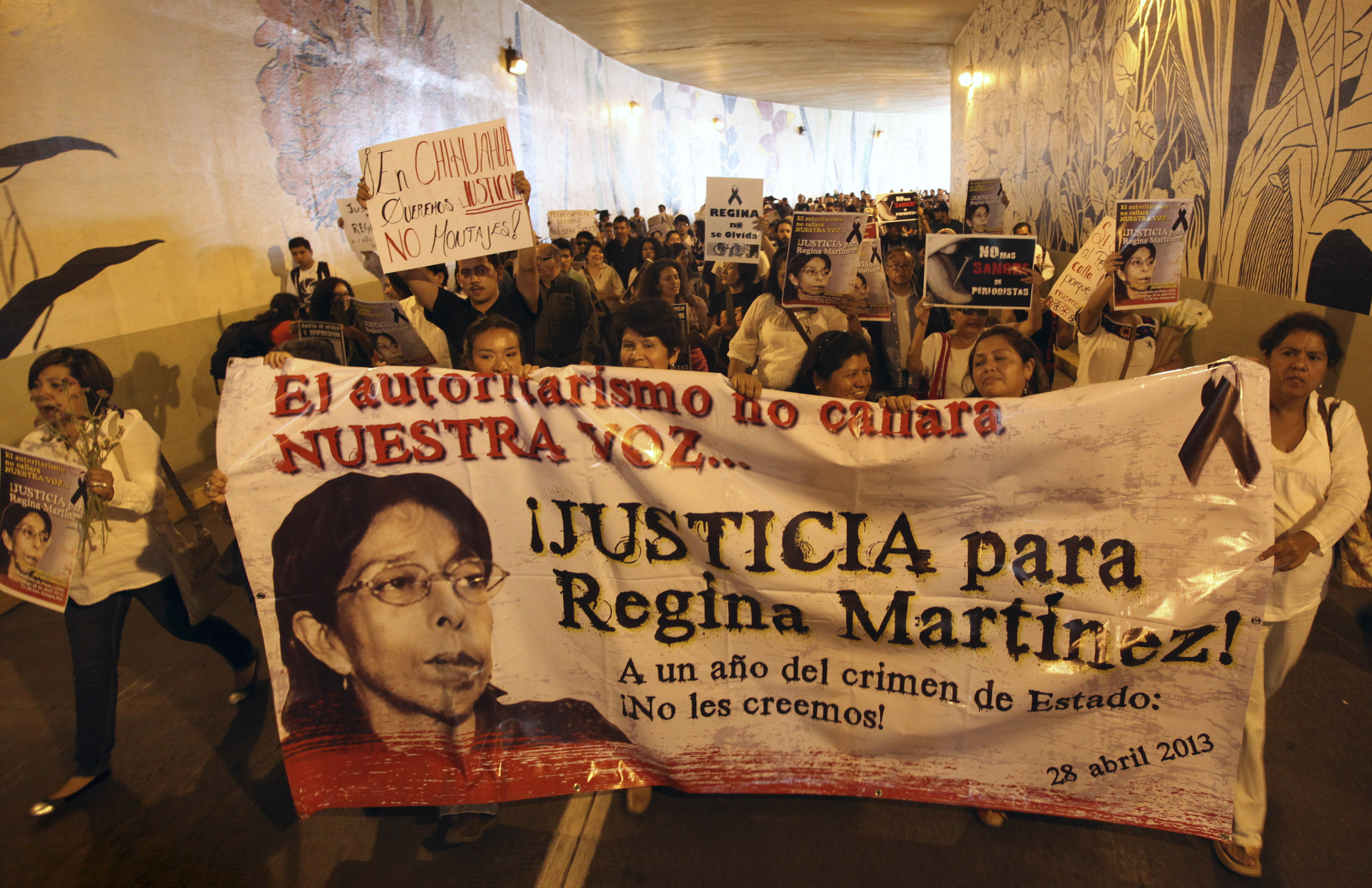 XALAPA, MexicoOfficials in Veracruz state say they know who killed Regina Martinez. The muckraking reporter, found beaten and suffocated in her house, was just the victim of a robbery, according to prosecutors and a local court.

But many of her colleagues don't believe it. The man convicted of the crime was tortured into a confession, they allege. And the magazine she works for says state officials discussed sending police across the country in an attempt to hunt down and seize another reporter who raised questions about the death, which is one of a growing list of killings that have put Mexico among the most dangerous places in the world to be a journalist.

Some 400 people gathered Sunday in the center of Veracruz's state capital, Xalapa, for a march to demand justice in the Martinez case and an end to attacks on the press. Many held up posters suggesting the government had a hand in the case, some describing it as "a state killing." Dozens also protested in Mexico City.

The New York-based Committee to Protect Journalists said in a February report that 12 Mexican journalists went missing in 2006-2012 and 14 were killed because of their work. Mexico's federal Human Rights Commission lists 81 journalists killed since 2000.

Martinez was the Xalapa correspondent for Proceso, one of Mexico's most respected investigative newsmagazines, and she was one of the few in the state who continued to work on stories related to drug cartels. Her last story for the magazine was about the arrest of nine police officers accused of links to traffickers.

State officials accused a man named Jorge Antonio Hernandez Silva of taking part in the killing, saying it came during a robbery, and he was sentenced this month to 38 years in prison. But he asserted he was forced to confess through several days of torture, and Proceso's editors don't believe the killing has been solved, noting that none of the fingerprints found at the scene of the killing match those of Hernandez Silva.

"Those who are truly guilty have not been identified," the magazine said in an online statement.

Mike O'Connor, Mexico representative for the Committee to Protect Journalists, said federal officials have doubts, too.

Proceso issued a statement this month alleging that some current and former state officials had met to plan the capture of a reporter who questioned the verdict and "to do him harm if he resists." Veracruz Gov. Javier Duarte later met with editors of Proceso and promised an exhaustive investigation.

His Gulf coast state, plagued by clashes among powerful drug cartels, has been one of the most dangerous for journalists. Twelve reporters have been slain or gone missing there since the start of 2010, according to the Committee to Protect Journalists.

Less than a week after Martinez was slain, three local reporters were dismembered, stuffed into black plastic bags and dumped into a waste canal, apparently by people linked to drug gangs that demand either favorable coverage or none at all.

Among those still missing is Sergio Landa Rosado, who vanished on Jan. 23, his first day back at work at Diario Cardel in the town of Cardel after being away for more than a month because of an earlier kidnapping that followed his reporting on the slaying of a taxi driver.

Attacks have become so common that many Mexican news media have announced they will no longer cover stories related to drug cartels.

As in the case of Martinez, it often can be difficult to determine whether a killing is directly related to a reporter's work, and who might be responsible. Press rights groups say officials are often sluggish in trying to answer those questions, and few of the slayings have led to convictions.

The hacked-up body of 22-year-old photojournalist Daniel Martinez Bazaldua and that of another young man were found in the northern Mexico city of Saltillo on April 24.

Coahuila state officials said signs left at the scene suggested the two men had deserted from a drug gang and state Attorney General Homero Ramos told reporters later that investigators had testimony indicating both men "were participating in illegal activities."

Editors at Martinez Bazaldua's newspaper, Vanguardia, said state officials provided no evidence that the photographer, at least, had any links to drug gangs.

"We think it is sad and alarming that Coahuila has become a state in which the authorities condemn murdered people, converting them into criminals, without offering the least evidence," the newspaper wrote.

The issue has become so serious that Mexico's congress passed a bill this month that would allow journalists to request that federal prosecutors and federal judges investigate attacks on them, and would make federal intervention mandatory in some cases. It has been sent to the president for his signature.