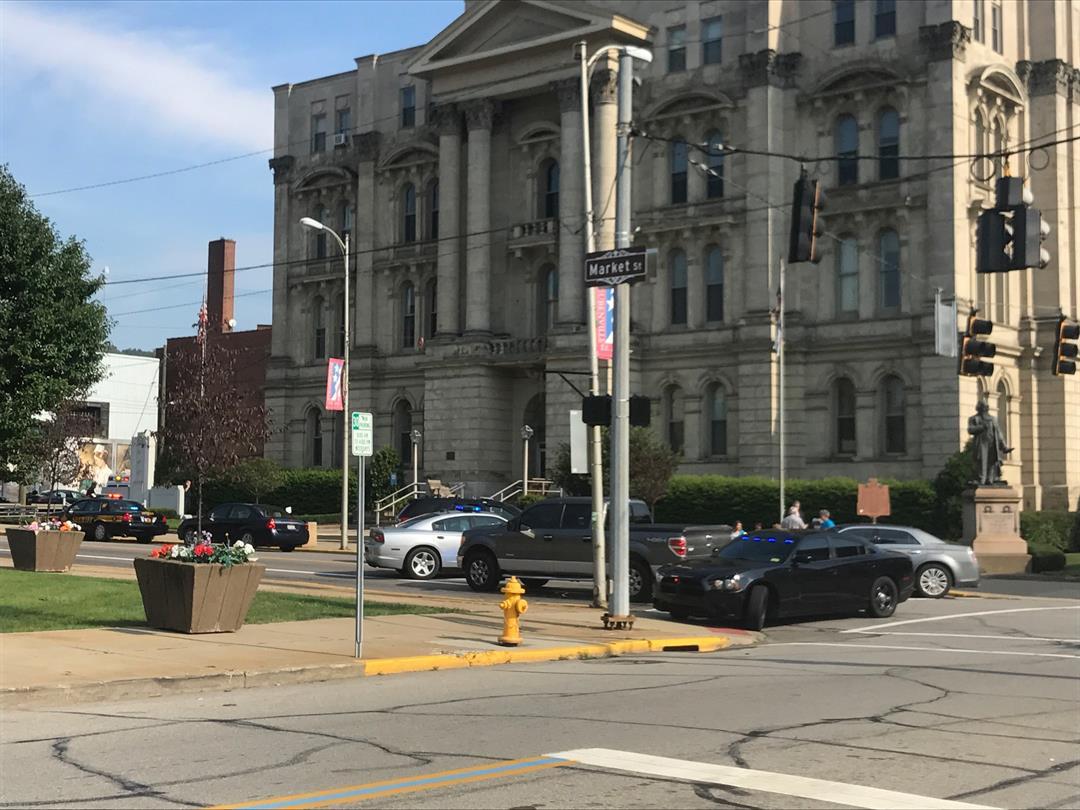 STEUBENVILLE, Ohio — A prosecutor says the man who shot and wounded an Ohio judge was the father of a Steubenville High School football player convicted of rape in 2013.

Investigators are still looking for a motive in the shooting and haven't found a connection to the rape case, said Jefferson County Prosecutor Jane Hanlin.

Jefferson County Judge Joseph Bruzzese Jr. was shot at around 8 a.m. near the courthouse in Steubenville, just across the Ohio River from West Virginia's northern panhandle, roughly 30 miles west of Pittsburgh.

Ma'Lik Richmond served about 10 months in a juvenile lockup after being convicted with another Steubenville High School football player of raping a 16-year-old girl during an alcohol-fueled party in 2012.

Hanlin says authorities aren't aware of a connection between the rape case and the shooting. A visiting judge from Hamilton County and not Bruzzese handled the vast majority of the Steubenville rape case.

The case brought international attention to the eastern city of 18,000 and led to allegations of a cover-up to protect the football team.

Bruzzese underwent emergency surgery after the morning shooting but is expected to survive.

Jefferson County Sheriff Fred Abdalla said courthouse video shows Bruzzese firing about five shots at the gunman, who was then shot to death by a probation officer.

Abdalla told reporters after Monday's shooting that investigators are familiar with the suspect and are checking to see if he had any connection with the judge.

The 65-year-old judge underwent surgery at a Pittsburgh hospital. Republican Gov. John Kasich said he's been told the judge is expected to survive.

The attack had to be intentional because people know about the reserved spots where judges park, said one of Bruzzese's judicial colleagues.

Judge Joseph Corabi said he and the county's two other judges park in reserved spots next to the courthouse in eastern Ohio. Judges then walk a few feet down what's known as "Courthouse Alley" to a side entrance to the building, said Corabi, the Jefferson County juvenile and probate court judge.

"Everybody knows who parks there. That's why it's not an accident what happened. He was clearly an intended target," Corabi said.

Ma'Lik Richmond is currently on the Youngstown State football team but isn't allowed to play this season, the school said earlier this month in responding to criticism surrounding his participation.

Corabi said Bruzzese is known as an avid hunter. He called him fair, hard-working, well-liked and "a tough son of a gun."

"He is very intelligent and he can cut to the chase," Corabi said. "He spots issues and he resolves the issues."

Bruzzese has served on that court since 1997, according to Ohio Supreme Court records. He was most recently re-elected in 2014 for another six-year term.

Local media reported that the suspect's body could be seen lying next to a car at the drive-thru of a neighboring bank. Police said a man who was in the car with him was taken into custody.

The courthouse was closed for the day as local and state authorities helped secure the scene. Jefferson County Commissioner Thomas Graham told WTOV that some courthouse workers witnessed the "tragic situation" and that people would need time to process what had happened.

The attack "reminds us all of the very real potential for violence against judges," Maureen O'Connor said.