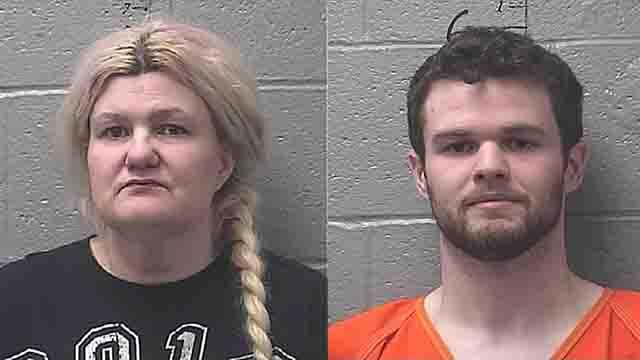 LEADWOOD, Mo. -- Prosecutors believe an eastern Missouri Ku Klux Klan leader was shot by his stepson in his home after arguing with his wife over a divorce, reports CBS affiliate KMOV.

A family that was fishing in the Big River in the tiny town of Belgrade, about 80 miles southwest of St. Louis, found Frank Ancona’s body Saturday. An autopsy conducted Sunday revealed that he died of a gunshot to the head.

Malissa Ann Ancona, 44, and her 24-year-old son, Paul Edward Jinkerson Jr., were charged Monday with first-degree murder, tampering with physical evidence and abandonment of a corpse in the death. Both are jailed without bond.

Prosecutors say Malissa Ancona was an “active participant” in the crime, and helped dispose of her husband’s body.  In an interview with KMOV on Feb. 12, several hours before her arrest, Malissa Ancona said her husband had gone missing from their Leadwood home but gave two different accounts of the circumstances surrounding his disappearance — first saying she thought she had to wait 48 hours to report him missing, and then saying she thought he took off.

“He kept saying he needed a break, so you know that’s kinda what I thought he was doing at first was taking a break,” Ancona said.

Malissa Ancona told the station she was “cooperating” and allowed investigators to come into her home without a search warrant. She said her husband had received threats because of his affiliation with the KKK, but she wasn’t sure if anyone wanted to hurt him.

According to police, when they searched Ancona’s home, they found “extensive blood evidence” in the master bedroom.

“To be honest my gut feeling when I first went there, I knew Malissa had something do with it,” Ancona Jr. told the station.

Prosecutors say Malissa Ancona had argued with her husband because he reportedly wanted a divorce, and believe Jinkerson fatally shot him, reports KMOV.

KMOV reports Malissa Ancona initially told authorities she was at a convenience store during the killing, but video evidence “just did not match up with her story at all,” Mahurin said.

Ancona called himself an imperial wizard with the Traditionalist American Knights of the Ku Klux Klan. A website for the group includes an image of him in a white hood and robe standing in front of a burning cross. The website describes the group as a “White Patriotic Christian organization that bases its roots back to the Ku Klux Klan of the early 20th century.”

The Park Hills Daily Journal said investigators placed yellow police tape around Ancona’s home in Leadwood Saturday. His safe had been broken into and the contents removed. Several of his guns were missing, police told the Daily Journal.

Washington County Sheriff Zach Jacobsen said a U.S. Forest Service employee found Ancona’s car Thursday on a service road near Potosi, about 30 miles from where his body was eventually found.

He was reported missing Friday after his employer told Leadwood police that he hadn’t shown up for work for two days.

Prior to the discovery of Ancona’s body, Malissa Ancona told police her husband had left the state on a delivery job. She said he planned to file for divorce when he returned.

Jinkerson’s attorney, Eric Barnhart, said he didn’t believe his client was involved in the killing, but he declined to comment further. It wasn’t immediately clear if Malissa Ancona had an attorney.