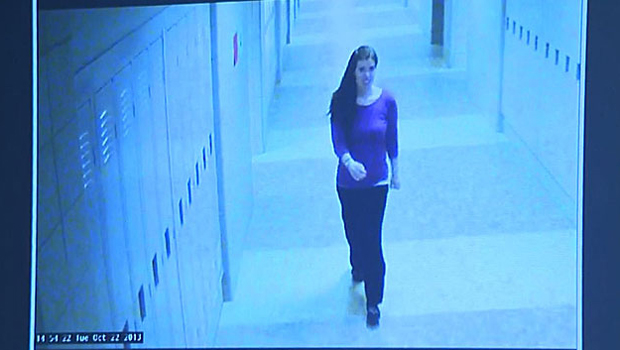 SALEM, Mass. -- The Massachusetts teenager who raped and killed his high school math teacher "knew right from wrong and could choose right from wrong," a prosecutor said Monday during closing arguments in the teen's murder trial.

But a defense attorney for Philip Chism said the then-14-year-old was in "the throes of mental illness" when he killed 24-year-old Colleen Ritzer shortly after he moved to Massachusetts from Clarksville, Tennessee.

Prosecutors say Chism strangled Ritzer and stabbed her with a box cutter in a Danvers High School bathroom in 2013, then used a recycling bin to bring her body into nearby woods.

Jurors were shown chilling surveillance video from the school that shows Ritzer walking into the bathroom, then Chism following her wearing a hood and putting on gloves.

Chism's lawyers admitted he killed Ritzer but said he suffered from severe mental illness. Defense attorney Denise Regan told jurors the evidence is clear that Chism suffered from a psychotic disorder and likely had since he was very young. She cited a history of mental illness in Chism's family.

"When Philip Chism followed Miss Ritzer into that bathroom, he was not himself. He was totally and absolutely responding to the terrible command of the hallucinations in his head," Regan said. Prosecutor Kate MacDougall graphically detailed the rape and murder. Ritzer was "stripped, battered, brutalized and violated," MacDougall said.

MacDougall rejected the defense claims of psychosis and said Chism knew what he was doing.

"There was no disorganized thinking, there was no chaos, there were no voices," she said. MacDougall acknowledged the difficulty of believing that a 14-year-old could commit such a brutal crime. "I am not going to stand here and tell you there is nothing wrong with Philip Chism. How could I?," MacDougall said.

But she also said Chism knew right from wrong.

"Doing something so awful does not make you crazy," she said. Chism, now 16, has been tried as an adult.