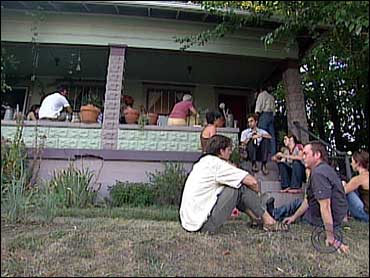 Unlike most unions that are at least loosely associated with the concept of work, Louisville Local 1339 of the P.P.S. is about anything but.

Claude says all he did was post a page on the Internet inviting people to join the Professional Porch Sitters Union and simply "Sit down a spell. That can wait" he wrote.

He says he never intended for people to actually join, but boy, did they.

"How do you start up a local of this union?" Hartman asks.

Claude says, "You sit on your porch as often as practical."

There are now thousands of locals in all 50 states and at least four countries.

There's now even a radio show out of Washington, D.C. where the hosts sit outside their studio and sit.

Claude thinks his idea is taking off because Americans long for what the porch represents.

"When you're on your porch you're a part of your community. When you're in your house you're not," he says.

The porch is a uniquely American phenomenon. People used to live on their porches until a air conditioning and television came along.

"The other thing that probably started happening is weird, wacky people started sitting on people's porches. And then how do you get rid of 'em?" says Hartman while sitting on a porch.

It can be a problem. But Claude thinks most of us would do well to spend a little quality time with our neighbors for a change -- whether they have anything worthwhile to say... or not.

Claude does get off the front porch on occasion. He even works as an education director at a nature center.