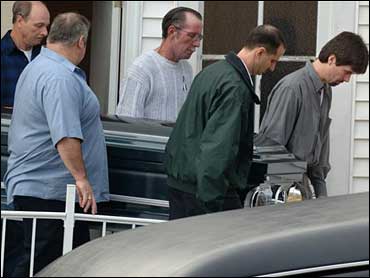 Investigations were called into both the Sago Mine disaster and overall national mining safety as the state prepared to say farewell to the last two victims of West Virginia's worst coal-mining accident in more than 35 years.

Construction of ventilation shafts and other preparatory work could be completed as soon as Tuesday, allowing federal inspectors to get their first look at the scene of last Monday's explosion at the Sago mine, reports CBS News correspondent Randall Pinkston. Experts say the experts may be able to get an indication of the cause of the deadly blast.

Meanwhile, the funeral for 59-year-old Fred Ware was held at Sago Baptist Church in Tallmansville, followed by a pre-noon service for Terry Helms, 50, in Masontown. Funerals for the other 10 men killed were held Sunday and Monday.

Mourners came from as far away as New York for the morning service for Ware at Sago Baptist Church, the small church near the mine where families gathered to await word on the fate of the men trapped underground.

"As I talked to his miner friends, they'd say, 'You know, Fred was always worried about someone else getting hurt,"' the Rev. Wease Day said at the funeral for Ware, who was buried in a flannel shirt and a camouflage cap.

Among the issues to be probed will be the tragic miscommunication that led to the mistaken belief that 12 of the trapped miners had been rescued alive on Jan. 2.

"I am asking for that because I have witnessed firsthand the unbelievable human suffering that comes from miscommunication," Gov. Joe Manchin said Monday.

Communication with the miners is also an issue.

"In keeping with their training, the miners put up barriers to trap fresh air and wait for rescue. They didn't know that they were just 2,000 feet from fresh air and there was no way to tell them, because the phone system had been destroyed by the explosion," reports Pinkston.

Sago mine CEO Ben Hatfield tells USA Today that the coal mining industry has been slow to update its communication system. He is now considering installing a wireless system in mine tunnels, similar to the devices now being used in tunnels for automobiles and trucks.

The only miner who did survive, Randal McCloy, remains in critical condition. He's fighting a fever and undergoing dialysis.

Doctors treating McCloy at West Virginia University's Ruby Memorial Hospital in Morgantown declined to speculate on when the 26-year-old would fully wake up from a medically induced coma, or comment on the extent of any brain damage he might have suffered.

But physicians said that McCloy's brain stem appeared to be normal, and that a fever is common for patients in intensive care. McCloy was breathing on his own, although he remained connected to a ventilator as a precaution, and was responding to stimuli, doctors said.

"It's time for the decisions affecting America's miners to be made with their best interests at heart," Byrd said in a statement. "That should be the legacy of the Sago miners."

Sen. Jay Rockefeller, D-W.Va., also called for hearings into the specific issue of coal mine safety. He said Congress had not held a comprehensive oversight hearing of the federal Mine Health and Safety Administration since 2001.

Also Monday, Manchin named J. Davitt McAteer, who oversaw the federal MSHA during the Clinton administration, to serve as his consultant, oversee the work of state and federal investigators, and issue a report on the disaster by July 1.

McAteer said legitimate questions exist about the number of citations at Sago Mine, which had 208 alleged violations of federal mine rules in 2005. The mine's owner, International Coal Group Inc., has said it is working to correct the violations inherited from the mine's former owner.