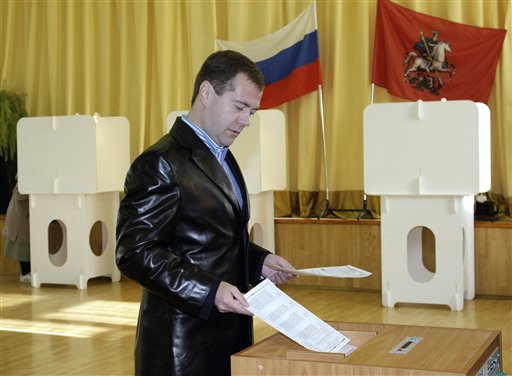 The pro-Kremlin party dominated an election for Moscow city council as well as other local elections across Russia, results released Monday showed.

With 99 percent of the Moscow vote counted, United Russia won 66 percent and the Communist Party 13 percent. They were the only two parties to pass the 7 percent threshold to win seats on the city council.

Opposition candidates claim they were hindered from campaigning for Sunday's elections and some were denied places on the ballot.

The liberal Yabloko party fell short of the threshold, with less than 5 percent, and will no longer be represented on the council, where it previously provided the only opposition to Moscow's powerful mayor, Yuri Luzhkov.

The Communists claimed there were mass electoral violations during the voting, particularly in Moscow.

More than 7,000 local elections _ for mayors, district leaders, regional and local legislatures _ were held in 75 of Russia's 83 regions, including in Chechnya and other republics in the North Caucasus where there has been an upsurge in violence.

Russian election commission head Vladimir Churov said the elections were held in accordance with the law. He acknowledged problems in the city of Derbent in the Dagestan region, where one third of the 36 polling places did not open, but he said they were resolved by the end of the day.

The newspaper Kommersant reported Monday that the incumbent Kremlin-backed mayor, Felix Kaziakhmedov, ordered police officers to block access to polling stations. Voters were also forced to give their passports to the officers, who then cast their ballots for Kaziakhmedov, the paper reported.

Kaziakhmedov won the election with 68 percent of the vote, Dagestani election official Benyamin Shartilov said. More than 55 percent of registered voters cast their ballots at 23 polling stations, he said.

In the southern Volgograd region, both candidates of African descent running for head of a rural district finished back in the pack.

Joaquim Crima, a Guinea-Bissau native, who attracted wide attention as "Russia's Obama," was joined late in the race by Filipp Kondratyev, the son of a Ghanaian father and a Russian mother. Crima, who became something of a local celebrity, accused the local authorities of putting forward a second black candidate to steal some of his votes.

With votes still being counted, Crima was running fourth out of seven candidates, with Kondratyev in last place. The United Russia candidate was leading, with the incumbent district head in second.