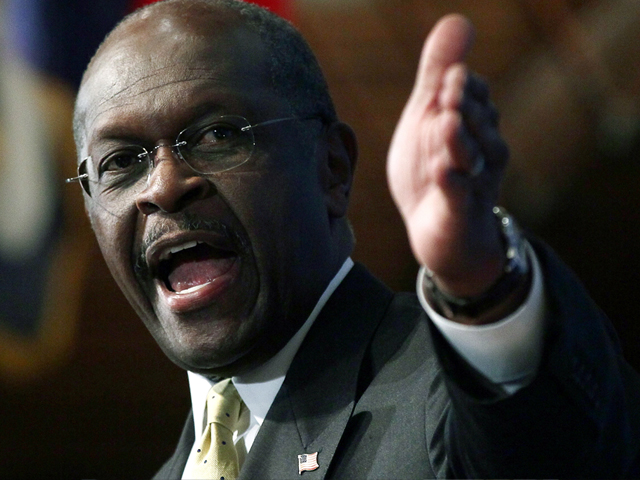 The political action committee affiliated with Republican presidential candidate Herman Cain sent out a fundraising appeal Tuesday suggesting that Cain is now facing a "high tech lynching" tied to allegations that he engaged in sexual misconduct with two women in the 1990s.

The phrase is a reference to Clarence Thomas' 1991 suggestion during his contentious confirmation hearings that he was experiencing a "high-tech lynching for uppity blacks who in any way deign to think for themselves."

"Herman Cain is winning the Republican race for President. So the left-wing media has swung into action," wrote Jordan Gehrke, Campaign Director of AmericansforHermanCain.com. "Just like they did to Clarence Thomas, they are engaging in a 'high tech lynching' by smearing Herman Cain's reputation and character."

"The Left absolutely loses their minds spewing hatred at black conservatives because they know that if the GOP ever breaks the Democrat stranglehold on the black vote, their days are numbered as a party," he added.

While right-wing figures have been invoking the phrase in the wake of the allegations surfacing Sunday night - Ann Coulter is among those who have complained of "another high-tech lynching" - the campaign itself has not been so explicit.

(At left, Nigel Innis of the Congress of Racial Equality calls the accusations a "high-tech lynching" and a "sequel to what was done to Justice Clarence Thomas in the 90s.")

Back in May, however, Cain predicted that "[t]hey're going to come after me more viciously than they would a white candidate," telling the Washington Examiner that "I'm ready for the same high-tech lynching that [Thomas] went through -- for the good of this country."

While Cain and his campaign have not claimed a "high-tech lynching" in specific reference to these charges, the campaign did say in its initial statement in response to the story that "we've seen this movie played out before" - a potential reference to the Thomas hearings.

Americans for Herman Cain, the Super PAC that sent out the Cain appeal, is technically unaffiliated with the Cain campaign, though it is specifically focused on helping him win the presidency. Super PACs can raise and spend unlimited amounts of cash on a candidate, though they're not allowed to coordinate with a campaign directly.

"It's our job to propel him to victory in Iowa, New Hampshire, Nevada, South Carolina, Florida, Michigan and Arizona," the group said last month, vowing to fund "everything from TV ads, voter mail, advocacy phones identifying Herman's supporters, to get out the vote programs."

The full fundraising appeal is below.

Is Herman Cain taking scandal from bad to worse?

They're at it again.

Herman Cain is winning the Republican race for President. So the left-wing media has swung into action. Just like they did to Clarence Thomas, they are engaging in a "high tech lynching" by smearing Herman Cain's reputation and character.

This from the same group of people who have spent the last 20 years defending John Edwards, Jesse Jackson and his illegitimate child, and Bill Clinton and his right to have affairs with interns in the Oval Office.

As the leading pro-Herman Cain committee, we absolutely intend to fight back with every resource we can bring to bear. Will you join us?

The last black conservative to rise this high was Clarence Thomas, and you saw what the Left did to him. What happened on the floor of the Senate in 1991 was one of the most disgusting displays this country has ever seen.

Let's send a clear message to the Left. Let's stand up against those who would like to take down any black conservative who stands up for Conservative values. Join "Americans for Herman Cain" today and support our efforts to fight back .

This is what the Left always does. They hated Clarence Thomas. They hate Michael Steele and Allen West. And now they hate Herman Cain. The Left absolutely loses their minds spewing hatred at black conservatives because they know that if the GOP ever breaks the Democrat stranglehold on the black vote, their days are numbered as a party.

It's days like this that reminds us why we launched "Americans for Herman Cain," and the 9-9-9 Fund.

Herman Cain has grassroots support. He has the poll numbers. He is a conservative. He can beat Barack Obama. Now it's our job to propel him to victory in Iowa, New Hampshire, Nevada, South Carolina, Florida, Michigan, and Arizona.

Will you help us? Will you help us and send a message that you are not going to let the Radical Left or the media or the establishment pick your Republican nominee?

I hope you'll join us. The stakes are too high not to.

Russia says it won't start a war in Ukraine, but it won't "be ignored"
Brian Montopoli