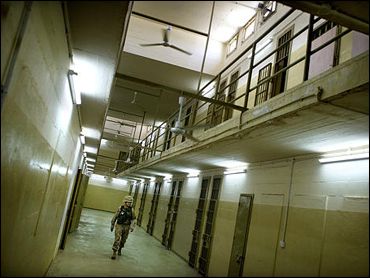 In a sworn statement to Army investigators obtained by USA Today, Army Lt. Col. Steven Jordan, the top military intelligence officer at Abu Ghraib when abuses occurred, said he was under intense pressure from the White House, Pentagon and CIA last fall to get better information from detainees.

He also said he had worked out a procedure with CIA interrogators to hide five or six inmates from Red Cross inspectors in October, the newspaper reported in Friday editions.

Jordan's statement said he was reminded of the need to improve intelligence "many, many, many times" and the pressure included a visit to the prison by an aide to White House national security adviser Condoleezza Rice, the paper reported.

To rebut Jordan's account, the White House arranged an interview with White House homeland security adviser Fran Townsend before, but in anticipation of, the newspaper's publication.

"I did not go there to pressure them to do anything they weren't doing," Townsend added. "I really wanted to understand how they were taking the information they had and what they were doing with it so that I could ^=… think through how we could make that dissemination of information most effective."