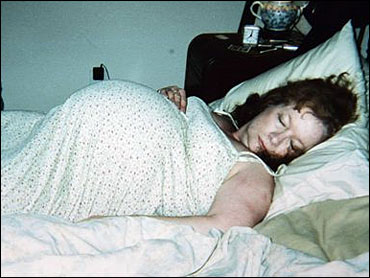 A woman who faked the birth of sextuplets was sentenced Monday to four years in prison for violating her probation.

Sarah Everson, 47, and her husband, Kris, 35, were living in the Kansas City suburb of Grain Valley in March 2006 when they made up the story about having sextuplets in order to tap the generosity of neighbors.

Within days of the story appearing on the front of The Examiner newspaper in Independence, the couple ultimately admitted to reporters and police that the entire thing was a lie. They said they needed the cash.

Gary Bradley, Grain Valley city administrator, says the couple brought him a list of items they needed, including a washing machine, diapers and a new vehicle, reported USA Today.

The Eversons' story quickly collapsed as officials checked hospitals and found no evidence of sextuplets. They closed a Web site soliciting donations for the couple.

They were sentenced in August 2006 to four years of probation after each pleaded guilty to one count of felony stealing by deceit. They were required to pay restitution of $3,661 and perform 40 hours of community service.

But warrants for the couple were issued after they failed to pay restitution and missed several probation violation hearings.

The whereabouts of Sarah Everson were unknown when her husband was sentenced last month to three years in prison. She was arrested a week later in Independence on outstanding warrants.

Leon Munday, a supervisor in the public defender's office, said another attorney from his office requested that Sarah Everson receive the same three-year sentence her husband received. The state sought a sentence of five years.