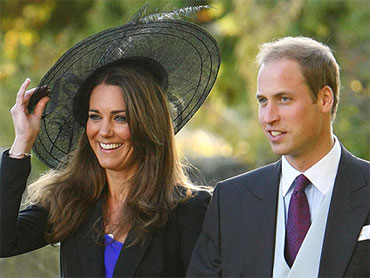 It's official. Perhaps the most widely rumored wedding in recent times, and certainly one of the longest rumored, is going to happen. Prince William finally became engaged to longtime girlfriend Kate Middleton, giving her his late mother's engagement ring and Britain the prospect of its biggest royal wedding since Prince Charles married Lady Diana Spencer almost 30 years ago.

Royal officials announced Tuesday that William will marry Middleton next spring or summer in London, ending years of rumored splits, reconciliations and will-they, won't-they speculation. The college romance that seemed to wilt under the pressure of adulthood and the glare of the paparazzi had blossomed at last.

William proposed during a holiday in Kenya last month and gave Kate the oval blue sapphire surrounded by diamonds from jeweler Garrard that his mother, Princess Diana, once wore.

"This was my way of making sure that my mother didn't miss out on today," William said as the couple posed for photographers inside St. James's Palace.

Prince William Engagement Announced on Twitter
Who Is the New Princess-to-Be?
Two Royal Weddings in One Season
Which Royal Title for Kate?
Timing of Wedding Is Crucial
Kate Middleton Has Princess Diana's Ring
A Look Back at Charles and Diana's Wedding

William is second in line to the British throne after Charles, his father. Kate and William's first child would move ahead of his younger brother Prince Harry to become third in line to the throne.

"Blimey," said William as he faced a torrent of camera flashes Tuesday at St. James's Palace. He wore a navy suit, Kate a simple blue dress.

Kate acknowledged that being queen was "a daunting prospect" and declined to say whether the prince had gone down on bended knee when he proposed.

Many in Britain welcomed the royal engagement as a rare piece of good news in a time of economic uncertainty and cutbacks - a time much like 1981, when millions watched Charles and Diana's fairy-tale wedding. Their marriage eventually ended in divorce - but no one was dwelling on that detail Tuesday.

William's grandmother, Queen Elizabeth II, and her husband Prince Philip "are absolutely delighted for them both," Buckingham Palace said. Prince Charles said he was "absolutely thrilled," and his wife Camilla, Duchess of Cornwall, said her stepson's engagement was "the most brilliant news."

"It's wicked," said the duchess, who had just attended an event at the theater where the musical "Wicked" is playing.

Middleton's parents, Carole and Michael, welcomed the prince to their family.

"We all think he's wonderful, we're extremely fond of him," Michael Middleton said. "They make a lovely couple."

Prime Minister David Cameron wished the couple "great joy in their life together," and said when he announced the news during a Cabinet meeting it was greeted by cheers and "a great banging of the table."

Cameron - who said he had camped out on the street the night before Charles and Diana's wedding procession - predicted that this royal wedding would be a "great moment for national celebration" that would unite Britain.

Using Twitter as well as a news release, Clarence House said Charles was "delighted to announce the engagement of Prince William to Miss Catherine Middleton."

The news was not, however, a surprise. Kate and William's engagement was the safest bet in Britain, considered so certain that bookies had stopped taking bets on a 2011 wedding. The date avoids London's Summer Olympics and the queen's Diamond Jubilee, both being held in 2012.

"We thought it was going to happen, now that it has it's an opportunity for a welcome national celebration," said Patrick Jephson, former secretary to Princess Diana, adding that her son's nuptials would be "a masterclass" in wedding planning.

The formal engagement is likely to turn the poised, brunette Middleton - already depicted approvingly in the fashion pages - into a global icon. With her confident good looks and long brown hair, Middleton has already become one of the most photographed women in Britain.

The palace will be hoping that she combines Diana's glamour and charm with a more commonsense approach to life. At 28, Middleton is considerably older than Diana was when she wed at 20, and has had greater life experiences and longer training in dealing with the media.

"She seems quite competent," said approving 22-year-old student Sarah Madden, "and seems to be just as wonderful as Diana."

William and Harry have spent a lifetime in the spotlight, with their drunken nights out and female friends the subject of constant tabloid gossip. William, who turned 28 in June, once told an interviewer he wouldn't marry "until I'm at least 28 or maybe 30." But since joining the military, both have kept a lower profile.

With one brief break up, she and William have been a couple since their days at St Andrews University in Scotland eight years ago. While they make an undeniably attractive couple, her suitably has always been an issue - she's not from an aristocratic background. But what the Royals and the country wants most is a marriage that will last, reports CBS News correspondent Mark Phillips.

"What they want is somebody who's not going to frighten the horses. Kate Middleton is it and if that's what she achieves by being middle class, then that's absolutely fine," said Victoria Mather. "I think people will very much come round to it, but of course one wants the fairy-tale princess, but … at least you could say she's our fairy tale princess."

Royal watcher Ingrid Seward told CBS' "The Early Show" that Middleton may not be as loved as Diana was, but "she will be our princess."

The royal family is said to approve of Middleton, the daughter of self-made millionaires. Her father worked for an airline and her mother was a flight attendant before they started a mail-order business specializing in children's parties, run from their farm in southern England.

She attended Marlborough College, an elite private school, where she played tennis and field hockey, before studying art history at St. Andrews. After graduating in 2005, Middleton worked for a time as a buyer for the fashion chain Jigsaw. She is now employed by her family's party-planning business.

"I think this is what the Queen is hoping, because she comes from such a stable background, is that we will, you know, she will make the perfect wife for William. She cooks, she sews, she's beautiful. She looks after him," said Seward.

This pairing has had a much longer trial run. In 2002, William paid 200 pounds to sit in the front row at a charity fashion show where Middleton was modeling in a daring outfit - they are thought to have started dating the following year.

Both are 28 years old, the time when William has always said he'd consider marriage.

A very serious question now is what kind of wedding it will be - a grand royal affair in one of London's big cathedrals or something more modest in keeping with these austere times. The major "will they or won't they" decision has been made. Now it's about how and where.

For pomp itself, the ceremony is likely to fall between the extraordinary spectacle of Charles and Diana's 1981 wedding in St. Paul's Cathedral and Charles' subdued second marriage to Camilla, Duchess of Cornwall at Windsor Guildhall in 2005.

"I think traditionally, historically, royal weddings were always a cause to cheer the country. Even when the queen got married it was right after the war, and they were still rationing, and it was a great blast of joy and people sent their coupons to help her with her clothes, and I think, not that it's going to happen this time, but I think maybe it will be bigger and grander than we imagined. Just as a way of cheering people up," Seward said.

The couple's relationship became public with a joint photo on a Swiss skiing holiday in 2004. Middleton then became a media darling - especially after both graduated, ending a media agreement to leave William alone while he was at university. With her confident good looks and long brown hair, Middleton became one of the most photographed women in Britain.

The brunette fashion buyer was photographed attending public events, going to work, even getting a parking ticket - a level of attention that evoked the romance of William's parents, Charles and Diana.

Middleton was there when William was commissioned as a British Army officer after graduating from Sandhurst military college in 2006. She was photographed attending public events, going to work, even getting a parking ticket - a level of attention that evoked the romance of William's parents.

But William was determined that Middleton would not suffer the same media hounding endured by his mother, who died in a Paris car crash in 1997. He appealed through his office for the media to leave her alone.

In 2007, Middleton filed a harassment complaint against a British newspaper. She accepted an apology and admission of error from the Daily Mirror.

It was widely thought the couple would soon announce their engagement. The retail chain Woolworths even commissioned mugs, plates and other Wills-and-Kate memorabilia.

But only weeks later in 2007, media reported - and Clarence House did not deny - that the couple had broken up. Newspapers pored over the apparent end of the relationship in long stories sourced to anonymous "friends."

William's army training kept them apart, said some. The media pressure was too much for her, said others. Still others murmured that senior courtiers felt Middleton's middle-class background wasn't royal material.

Soon, however, the same newspapers were reporting that the pair had rekindled their romance. They were photographed leaving a London nightclub together, and Middleton was snapped on a stag hunting expedition at the royal family's Balmoral estate alongside Prince Charles.

When William graduated from his first flying course in the spring of 2008, Middleton applauded from the sidelines - although his training was not without incident. The Ministry of Defense confirmed that William had landed a helicopter on Middleton's parents' lawn during a training flight and flew a Chinook to a friend's stag party on the Isle of Wight - earning him a drubbing in the press for his perceived sense of entitlement.

William later served a two-month deployment with the Royal Navy before training to become a Sea King search-and-rescue pilot with the Royal Air Force. He recently completed that training.

The pair have recently seen each other mostly on weekends, with William a frequent visitor to the Middleton family house in the affluent village of Bucklebury, 50 miles (80 kilometers) west of London.

Earlier this month, Middleton's parents were invited to join members of the royal family for a shooting holiday at Balmoral, another milestone on Kate's road to acceptance by the royal family's inner circle.

Clarence House said after the wedding, the couple will live in north Wales, where William is based with the RAF.

Middleton has rarely, if ever, spoken about William in public. "I love the uniform. It's so, so sexy," - her assessment at William's graduation from Sandhurst - was a rare slip.

The couple were to give their first joint interview later Tuesday.

Not everyone was happy about the expected extravaganza. Graham Smith of the anti-monarchy group Republic said at a time of cutbacks, a lavish state-funded wedding was inappropriate.

"They need to pay for this event entirely themselves and not try to use it as some sort of PR exercise for the monarchy," Smith said.