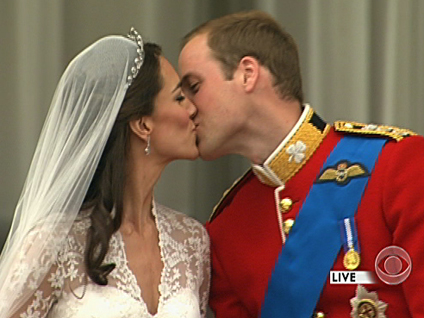 (CBS) Prince William and his bride, Catherine, came out to wave on the balcony at Buckingham Palace and kissed twice, both times briefly.

"I'm going to have to see the instant replay!" said Katie Couric after the first.

William's parents, Prince Charles and Princess Diana, famously kissed on the balcony at Buckingham Palace on their wedding day, July 29, 1981. CBS News commentators said William and Catherine's kisses resembled a peck. The crowd didn't seem to mind: The cheers were loud and enthusiastic.

For weeks, there has been speculation about how the Prince and Princess would kiss on the balcony. When it did take place, the Duke and Duchess of Cambridge were surrounded by their families, and it was over quickly, with commentators suggesting Prince William doesn't want to be hemmed in by expectations.