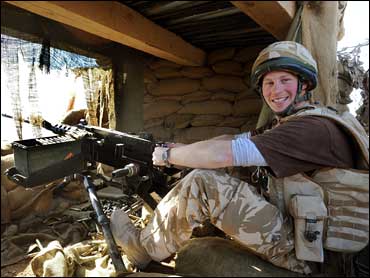 Prince Harry has been serving on the front lines in Afghanistan with the British Army, the Ministry of Defense said Thursday.

Officials said the prince, a lieutenant in the Blues and Royals regiment, was still deployed in the country. Harry, who is third in line to the throne, has been in Afghanistan since December.

The story was leaked by an Australian magazine and a German newspaper. Up to now, the prince said, he's been able to maintain his anonymity.

In a deal with the British press, Harry's deployment was kept quiet due to fears he'd be what he called a "bullet magnet" for the Taliban, endangering him and his troops, CBS News correspondent Mark Phillips reports.

But the embarge was broken overseas, most notably on the Drudge Report website in the U.S. Harry's cover as a normal soldier, was blown.

"As you saw on the patrol today, just walking along with some of the locals or the (Afghan National Police), they haven't got a clue," the prince told Sky News reporter Geoff Meade. "Next door through these walls are the interpreters and they haven't got a clue. I'd sit down and have a chat with them, have a cigarette with them - I wish I could say I had a beer, but that doesn't happen around here - it's totally normal.

"Until you guys showed up," the prince laughed, "I was a normal person."

The prince is a junior officer with heavy responsibility, reports Meade. His job is to act as the link between forces on the ground and air and artillery forces called in to protect them. Harry said he's thriving in the environment.

"I don't think there's any words to describe it. It's just really nice to be out here," said the prince. "I've only been out here for a short time; I hope to be out here for a lot longer and go through it with everybody else. It's much better being out here experiencing it rather than hearing all the stories from people coming back."

Harry, 23, has been fighting in the restive Helmand province, where most of the 7,800 British troops in Afghanistan are based.

"His conduct on operations in Afghanistan has been exemplary," said the head of the army, Gen. Richard Dannatt. "He has been fully involved in operations and has run the same risks as everyone else in his battle group."

Dannatt said he was "very disappointed" that the story had leaked.

One soldier deployed with Harry explained that the prince's presence is a morale booster for the troops.

"We're serving Queen and country and he's a living breathing member of the royal family and stood right next to us fighting on the front line. It makes me proud and I hope it makes people back home proud," the soldier said.

Harry is currently a serving British Army officer with the Blues and Royals, part of The Household Cavalry. He holds the rank of Second Lieutenant, or Cornet as it is known in the regiment.

He began his officer training at the Royal Military Academy in Sandhurst in May 2005 and received his commission as an Army officer in April 2006. He joined his regiment the following month.

Last May, military chiefs ruled Harry could not be sent to Iraq with his regiment because publicity surrounding his deployment could put him and his unit at risk.

"There have been a number of specific threats - some reported and some not reported - which relate directly to Prince Harry as an individual," Dannatt said at the time. "These threats place not only him but also those around him to a degree of risk that I now deem unacceptable."