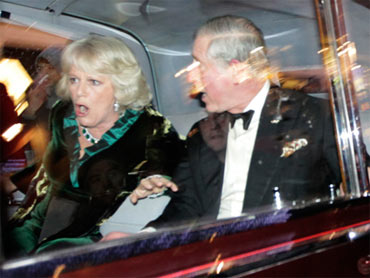 (Scroll down to watch a report from London)

In a major security breach, demonstrators set upon the heir to the throne's Rolls Royce as it drove through London's busy West End on its way to a theater. A group of up to 20 struck it with fists, sticks and bottles, breaking a window and splattering the gleaming black vehicle with paint.

In the frenzy, some chanted "off with their heads!"

Britons pay very high taxes, and one of the things they have received in return is a free - or almost free - college education, CBS News Correspondent Elizabeth Palmer reports.

Not any more. The students protesting Thursday will graduate with very large debts, Palmer reports.

By nightfall, police corralled the students in the center of London, in Parliament Square, where some of the more violent ones started to attack government buildings, Palmer reports.

Adnan Nazir, a 23-year-old podiatrist who was following the protesters, said Charles, 62, kept his calm, gently pushing his 63-year-old wife toward the floor to get her out of the line of fire.

"Charles got her on the floor and put his hands on her," Nazir said. "Charles was still waving and giving the thumb's up.

"It was just a surreal thing," he said. "It was completely manic."

The chief of the Metropolitan Police, Paul Stephenson, said the force would launch an investigation into Thursday's violence.

Prime Minister David Cameron said the violence against the royal couple was "shocking and regrettable."

"It is clear that a minority of protesters came determined to provoke violence, attack the police and cause as much damage to property as possible," Cameron said. "They must face the full force of the law."

Police said it was unclear whether the royals had been deliberately targeted, or were simply in the wrong place at the wrong time.

The couple arrived looking somber but composed at the London Palladium theater, where they were attending a Royal Variety Performance.

Camilla later managed to shrug off the ordeal, saying there was "a first time for everything," the Press Association news agency reported.

Thousands of students staged a peaceful protest but a minority turned violent, hurling sticks and rocks at riot police, smashing store windows and setting on fire a giant Christmas tree in Trafalgar Square.

Earlier, small groups of protesters near London's Parliament Square threw flares, billiard balls and paint bombs, and officers, some on horses, rushed to reinforce the security cordon. Police said 13 protesters and four officers were injured in the fracas, while seven people were arrested.

Thousands of other students held demonstrations and sit-ins throughout the country, heaping pressure on the government to reverse course. Students marching through central London banged drums, waved placards and chanted "education is not for sale," as weeks of nationwide protests reached a crescendo.