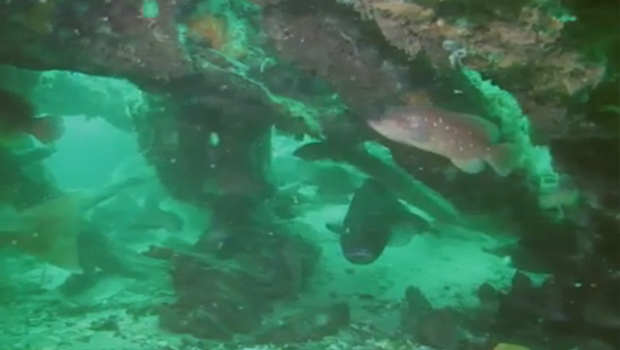 It sounds more like a fantasy, but a group of scuba divers recently discovered the remains of an ancient forest about 10 miles off the coast of Mobile, Ala. Researchers are estimating that the forest existed at least 50,000 years ago, and that it thrived for 1,500-2,000 years before it was buried deep below the ocean floor. The stumps are between six and eight feet in diameter.

"This is the first I'm ever hearing of a submerged forest," said University of Southern Mississippi dendrochronologist Grant Harley, who has examined samples taken from the tree stumps. "It takes some pretty special environmental characteristics to preserve wood this long."

A local fisherman first spotted the area sometime after 2005's Hurricane Katrina, leading researchers to believe that the force of the hurricane, or of another hurricane or tropical cyclone, might have uncovered the primeval forest. It was previously buried below sediment, creating an oxygen-free environment ideal for preserving the ancient wood. Once uncovered, it morphed into an artificial reef, quickly becoming home to dozens of fish, crabs, oysters and other sea life.

The fisherman told a local dive shop owner, who kept the location secret for years before finally telling Ben Raines, executive director of the non-profit Weeks Bay Organization. Raines was among the first divers to explore the site. He took home two wood samples, one from a log and one that was laying on the ocean floor. He then called Harley.

Harley and fellow researcher Kristine DeLong of Louisiana State consulted sea level curves to determine when the levels were low enough to allow the forest to grow. Bald Cypress trees cannot grow when salt water is present, Harley explained to CBSNews.com, so the sea level had to have been low enough for fresh water to exist in the coastal marsh. The last time this happened was 10-15,000 years ago. But the two samples that they tested were older than that, so they had to look deeper into history. The next previous time when sea levels were low enough was 50-80,000 years ago, during the Wisconsin Glacial Period.

By reading the tree rings from the remaining stumps, Harley and DeLong will be able to gather information about regional precipitation, climate, temperature, rain fall, drought and more. But to do so, Harley predicts they will need to move quickly.

"I couldn't give an exact guess, but now that the wood is uncovered and not in an anoxic environment anymore, now that it is exposed to marine boring organisms and oxygen itself and salt water...in a couple years [the stumps] will be crumbly."

Harley and DeLong are currently applying for grants in order to further study the Cypress stumps. In order to fully determine the age of the forest, they will need to find a better sample.

"The samples [we have] are both radiocarbon dead. We just need one datable sample, and we can use the tree rings and match the patterns to make a time series," he explained.

The samples they collected on Raines's first dive contain more than 400 tree rings, but Harley expects to find 1,500 or more rings on each full stump. So many rings would indicate that the forest thrived two millennia before sea level rise buried it deep beneath the ocean floor.