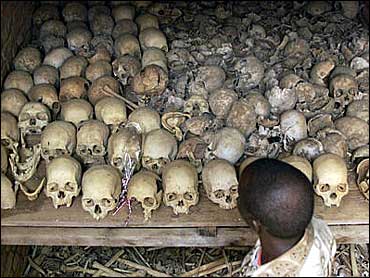 A Roman Catholic priest accused of ordering the slaughter of 2,000 people who sought refuge in his church during Rwanda's genocide refused to appear for the start of his trial at a U.N. tribunal Monday.

The Rev. Athanase Seromba is the first Roman Catholic priest to be tried for the 1994 genocide, in which at least 500,000 minority Tutsis and political moderates from the Hutu majority were killed.

During an initial appearance last year, Seromba pleaded innocent to charges of genocide, complicity in genocide, conspiracy to commit genocide and crimes against humanity related to the 100-day slaughter orchestrated by the extremist Hutu government then in power.

Seromba refused to show up Monday in protest at U.N. plans to transfer the trials of some genocide suspects to Rwanda. The tribunal does not force defendants to appear.

The transfers are meant to help ease the load on the Tanzania-based tribunal, which is trying to meet a U.N. Security Council deadline to complete investigations by the end of 2004, end trials by 2008 and close down by the end of 2010.

About 44 suspects said they would not attend court proceedings for three days starting Monday to protest the planned transfers, and they also began a hunger strike, tribunal spokesman Roland Amoussouga said.

They oppose the transfer of trials because they fear for their security in Rwanda and don't believe they'll get fair trials there. The tribunal has yet to determine which trials would be transferred.

Seromba's trial began in his absence after prosecutors argued it would not violate the priest's rights as long as his lawyers were present.

Prosecutors say Seromba — then parish priest in Nyange, in Rwanda's eastern Kibuye Province — organized the slaughter of 2,000 people who fled to the church to escape killings by the extremist Interahamwe militia, the army and neighbors.

A number of Hutu church leaders are alleged to have played significant roles in the genocide, with bishops, priests and nuns splitting along ethnic lines as in the rest of the country. Thousands of Rwandans were massacred in churches during the slaughter.

Seromba is the third member of the clergy to appear at the tribunal.

Elizaphan Ntakirutimana, a Seventh Day Adventist pastor in Kibuye was convicted in February of genocide and crimes against humanity. He was sentenced to 10 years in prison.

Samuel Musabyimana, a former Anglican bishop in Rwanda, died in a Tanzanian hospital in January of an unspecified illness while awaiting trial at the U.N. tribunal. He had been charged with genocide and crimes against humanity.

Two Rwandan nuns were convicted by a Belgian court for aiding and abetting the genocide.

Prosecutors allege that Seromba, a Hutu, ordered the Hutu militia to kill the Tutsi who sought shelter in his church.

"The ... militia attacked with traditional arms and poured fuel through the roof of the church, while gendarmes and communal police launched grenades and killed the refugees," the indictment said.

Seromba ordered the demolition of the church to kill survivors, prosecutors said.

The church was bulldozed and its roof collapsed, killing more than 2,000 Tutsis gathered inside. The few survivors were killed by the Interahamwe.

Seromba then ordered the Interahamwe to clean the "rubbish," after which the victims were dumped into mass graves, prosecutors said.

The region around Seromba's church was home to some 6,000 Tutsis before the genocide, but almost all were killed in the slaughter.