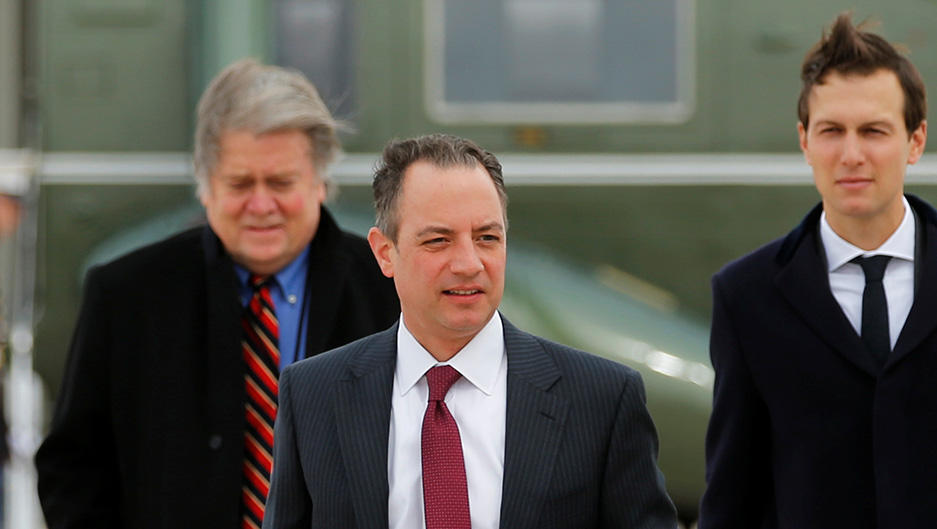 “Reince had the two sit down with him to clear the air and agree [on focusing] on the agenda and ending the back and forth,” a White House official told CBS News.

The meeting in Palm Beach, Florida, comes in the wake of reports that Mr. Trump may be considering a major shakeup in his top staff, and that Priebus and Bannon’s jobs are in danger. The White House has pushed back on those reports.

Ivanka Trump, Kushner’s wife and Mr. Trump’s eldest daughter, dismissed claims of infighting in a recent interview with “CBS News This Morning” as mere differences of opinion. She recently joined the White House staff in an official capacity as assistant to the president.

The infighting between Bannon and Kushner reportedly came to a head on Thursday as Mr. Trump was weighing military action against Syria. The New York Times reported Mr. Trump told his top aides he was tired of hearing about their infighting in the media, ordering them to “work this out.”

Since the beginning of Mr. Trump’s presidency, Bannon and Kushner have espoused diverging views, whether behind the scenes or publicly. The hard-charging Bannon, a self-described “economic nationalist,” has clashed with Kushner, a longtime Democrat, on issues ranging from social policy to intervention in Syria.

Bannon and Priebus both find themselves in the unenviable position of clashing with a member of the Trump family.

Bannon’s name was removed from the National Security Council’s Principals Committee earlier this week, sparking talk that the president’s controversial chief strategist may be losing his foothold in the White House.

Meanwhile, Kushner’s role has been expanding. Mr. Trump has given Kushner increasing input in policymaking, most notably in foreign affairs, where Kushner has virtually no experience.