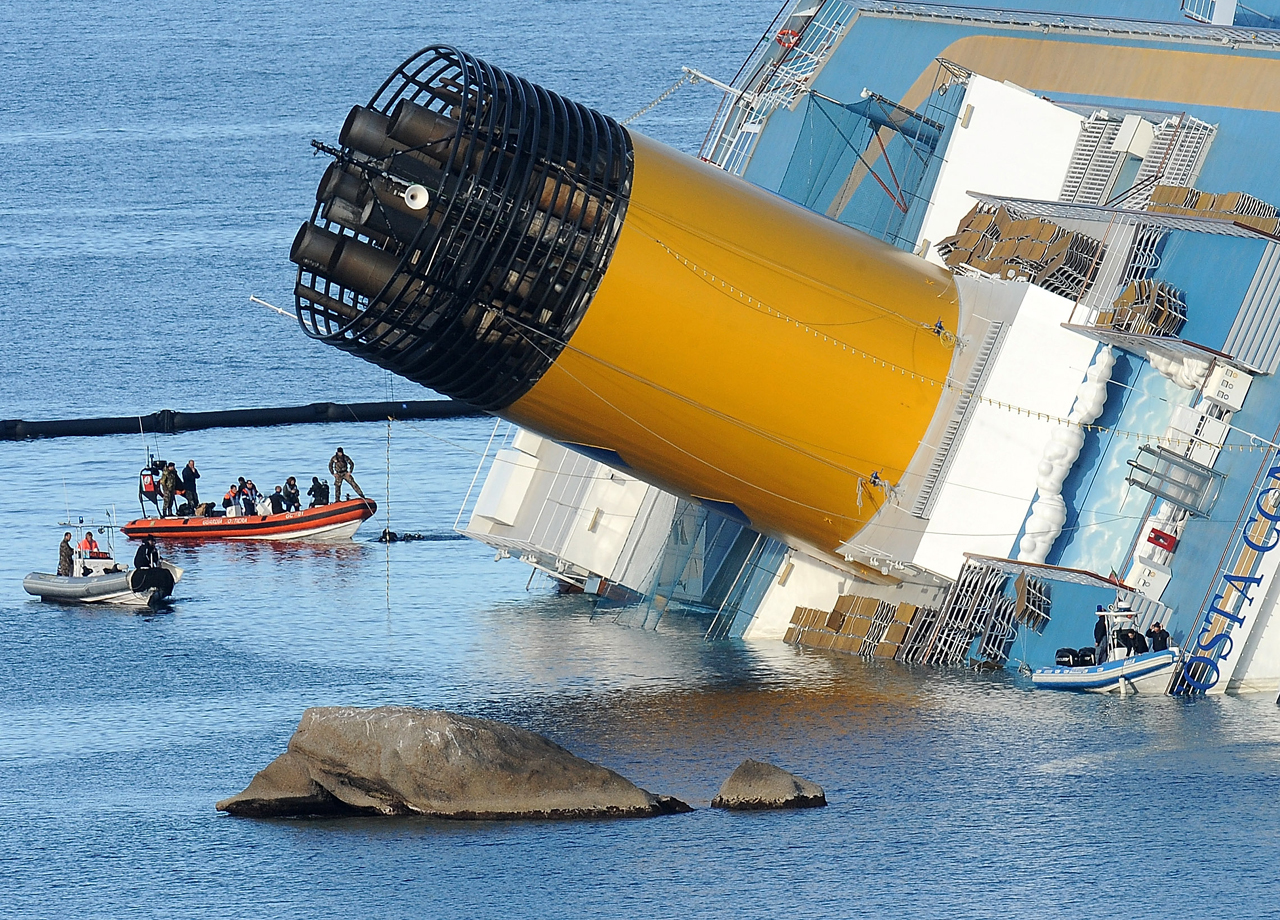 GIGLIO, Italy - Italian officials were clearing hurdles Monday to begin pumping some half a million gallons of fuel from the capsized Costa Concordia that threaten an environmental catastrophe, as divers continued the search for 19 people known missing.

Civil protection officials are weighing whether to halt the search so the pumping of the fuel could begin, as islanders grew increasingly concerned about the possibility that the double-bottomed tanks holding some 2,000 tons of heavy fuel could leak.

The pristine sea around Giglio, where the ship with 4,200 people aboard rammed a reef and sliced open its hull on Jan. 13 before turning over on its side, is a prized fishing area and part of a protected area for whales and dolphins.

"They should start the oil drainage operations on the ship. At this point those who died will not come back to life. Even if they pull them out later, unfortunately it won't make a difference," resident Andrea Ginanneschi told The Associated Press.

The national civil protection official in charge of the rescue effort met with technical experts Monday morning to determine if operations to pump the fuel could begin alongside with the ongoing search, or if it would present dangers to the divers. Franco Gabrielli was to meet later with prosecutors to discuss the implications of halting the search.

Dutch salvage company Smit has been ready for a week to begin pumping fuel from the tanks, awaiting only the go ahead.

However, operations on board have been periodically stopped as the Concordia shifts on its precarious perch. A few yards from the wreck, the sea bottom drops off suddenly, by some 65-100 feet, and if the Concordia should abruptly roll off its ledge, rescuers could be trapped inside.

Smit said on Monday that Italian authorities have indicated it can begin the removal once a second absorbent boom is in place around the ship and following the arrival of an oil removal vessel, expected later Monday. The booms are used "to reduce the possibility of polluting shorelines and to help make recovery easier," the company said on its website.

"Based on the current insights, it is understood that the Italian marine authorities will permit oil removal activities to commence once these precautionary measures have been put in place," Smit said in a statement.

The search for missing crew and passengers has been continuing around the clock, conditions permitting, with divers focusing on areas where the missing were last seen, places were they might have gathered for evacuation and individual cabins.

Divers on Sunday pulled a woman's body from the ship, raising to 13 the number of people pulled out dead from the ship, and 19 other people are still listed as missing. Officials, however, acknowledged over the weekend that there may have been unregistered passengers on board, which could raise the number of potential victims.

Already, some diesel and lubricants have leaked into the water near the ship, probably from machinery on board. Officials have characterized the contamination as superficial.

Besides the heavier fuel, there also are 185 metric tons of diesel and lubricants on board — some dispersed in machinery and lifeboats, and not in 17 double-bottomed tanks that hold most of the fuel — in addition to chemicals including cleaning products and chlorine.