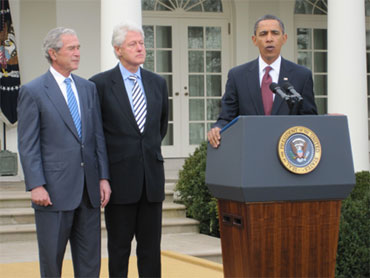 President Barack Obama said Saturday that America "stands united" with the Haitian people as he thanked two former presidents for agreeing to help raise billions to rebuild the Caribbean nation struck by a devastating earthquake.

Mr. Obama met in the Oval Office with George W. Bush and Bill Clinton to discuss the fundraising effort.

"By coming together in this way, these two leaders send an unmistakable message to the people of Haiti and to the people of the world," Obama said in the Rose Garden, standing between Bush and Clinton. "In these difficult hours, America stands united. We stand united with the people of Haiti, who have shown such incredible resilience, and we will help them to recover and to rebuild."

Bush and Clinton have created a Web site, clintonbushhaitifund.org, to begin collecting donations. They said potential donors should know that their money will be spent wisely.

How to Help Victims
"Family Links" Web site for the Missing
Complete Coverage: Devastation in Haiti

Bush said the best way for people to help in Haiti is by sending money.

"I know a lot of people want to send blankets or water. Just send your cash," said Bush, who made his first visit to the Oval Office since leaving the White House in January 2009.

Clinton, who also is the special U.N. envoy to Haiti, said he had stayed in Haitian hotels that collapsed during Tuesday's earthquake and dined with people who were killed in the disaster.

"It is still one of the most remarkable, unique places I have ever been," he said.

To contribute, visit the secure online donation page at clintonbushhaitifund.org, or mail a check to: