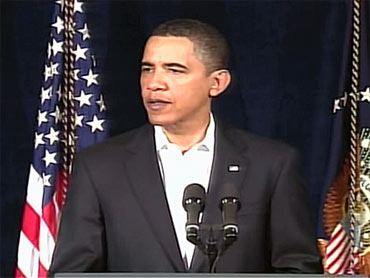 President Obama again addressed the American people Tuesday about the Christmas Day bombing attempt aboard a Detroit-bound airliner, acknowledging "serious concerns" about the intelligence and security failures that contributed to the breach and promising to "insist on accountability at every level."

Mr. Obama, speaking from his vacation spot in Hawaii for the second time in as many days, praised the bravery and commitment of those who work in intelligence and law enforcement and said that the response to the attempted attack - after it occurred - was appropriate and effective.

But the president admitted that information about the bombing suspect, Umar Farouk Abdulmutallab, was not effectively shared among intelligence agencies in the weeks and months leading up to the attack.

"Had this critical information been shared, it could have been compiled with other intelligence and a fuller, clearer picture of the suspect would have emerged," Mr. Obama said. "The suspect would never have been allowed to board that plane for America."

He added, "A systemic failure has occurred and I consider that totally unacceptable. … There was a mix of human and systemic failures that contributed to this potential catastrophic breach of security. We need to learn from this episode and act quickly to fix the flaws in our system."

The president pointed specifically to reports that Abdulmutallab's father warned U.S. in officials in Africa that his son was developing extremist views and might be a risk.

"It now appears that, weeks ago, this information was passed to a component of our intelligence community but was not effectively distributed so as to get the suspects name on a no-fly list," Mr. Obama said. "There appears to be other deficiencies as well. Even without this one report, there were bits of information available within the intelligence community that could have and should have been pieced together."

Yesterday, Mr. Obama announced reviews of the America's terrorist watchlist system and its air travel screening procedures. He said today that those reviews are underway with preliminary results due to him on Thursday. More rigorous reviews will be completed in the coming weeks, he said.

He promised to provide homeland security agencies with all needed tools and resources.

"I fully understand that even when every person charged with our security does what they're supposed to do, even when every system works exactly as intended, there's still no 100 percent guarantee of success," Mr. Obama said, but that uncertainty should only drive the nation to work even harder to minimize risks.