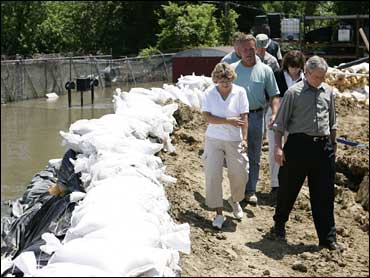 President Bush, surveying the aftermath of devastating floods during a lightning-quick tour of the Midwest on Thursday, assured residents and rescuers alike that he is listening to their concerns and understands their exhaustion.

"Obviously, to the extent we can help immediately, we will help," said Bush, still mindful of criticism that the government reacted slowly to Hurricane Katrina three years ago.

"You'll come back better," the president said while being briefed by state and local officials at a cinderblock emergency operations center set up at a community college here, part of a three-hour tour. "Sometimes it's hard to see it."

Bush was in Europe when tornadoes hit and heavy rains sent rivers surging over their banks, killing at least 24 people, the majority in Iowa.

Bush made a point to try to show his deep concern while overseas and traveled to Iowa just two days after returning.

"I really don't have much of an opinion of his coming," said Lashawn Baker, 33, whose family was just starting to clean her flooded home in a southwest Cedar Rapids neighborhood. "It took him a long time to get to New Orleans and he didn't help any of those people, so I don't think he's going to do anything to help Cedar Rapids now that he's here."

Cedar Rapids was submerged in a dirty lake when the Cedar River crested almost 20 feet above flood stage. Now, with the floodwaters having receded, trash was everywhere and businesses and families were trying to determine what could be salvaged.

In Iowa City, a college town about 30 miles to the southeast, the damage was more limited when the Iowa River topped its banks.

But in Missouri and Illinois along the Mississippi River, the danger was still present - not past.

The river tore through a levee late Wednesday at Winfield, about 50 miles north of St. Louis. A second levee still protected most of the town of 720 residents, but residents were urged to evacuate.

Some who were leaving tried to save as many personal belongings as possible, reports Tracy.

"You just got to work as fast as you can because anything you leave is gonna be lost," resident Barbara Colbert told Tracy.

One resident, though, was hopeful his home would be saved. After devastating floods in 1993, Randy Ketteman's father-in-law built a concrete wall around his house, while his neighbors just laughed at him.

"I think Pop knew what he was doing," Ketteman told Tracy. "I am happy to have this wall here now because I think we're gonna save the house."

In the 150-resident village of Hamburg, Ill., also north of St. Louis, there was no levee to hold back the Mississippi, and Mayor Jim Fortner said about 50 prisoners were helping dozens of volunteers hastily add 2 to 3 feet to a half-mile wall of sandbags. The river, expected to continue rising, already had swamped the town's busiest street and significantly damaged seven homes.

"We have the resources and materials, but we need more people," Fortner said.

Another levee break earlier this week at Meyer, Ill., meanwhile, meant lower river levels for some towns downriver - Quincy, Ill., and Canton and Hannibal in Missouri - but only temporarily. The river was expected to rise again in all places on Friday.

The flooding wasn't expected to be quite as bad in St. Louis, but it was forcing the relocation of several upcoming festivals.

At the briefing in Cedar Rapids, Bush, his shirt sleeves rolled up, told local officials that he came "just to listen to what you've got on your mind."

Noting that several hundred federal emergency workers were fanning across Iowa, he added: "That ought to help the people in the smaller communities know that somebody is there to listen to them."

Looking across the room full of local officials and military personnel, who have taken part in grueling search-and-rescue efforts, he said: "You're exhausted and I understand that."

Bush went from there on a helicopter tour that revealed an area that, though mud-caked, was beginning to return to normal. The president then visited Iowa City to the south, chatting with employees of a riverside company used as a staging area for volunteers, propping up spirits at a Red Cross emergency shelter and walking to the water's edge in a flooded-out neighborhood.

His shirt drenched in sweat, Bush said he brought a lot of federal officials along on his trip to make sure that they coordinate with their local counterparts now as well as when rebuilding begins.

The sluggish federal response when Hurricane Katrina devastated the Gulf Coast in 2005 was judged woefully inadequate and brought heavy criticism of Bush and FEMA. It also brought sensitivity on the part of federal officials each time disaster has struck since to show that things were working better.

Paulison said one thing FEMA was doing differently was working better with other partners - the Army Corps of Engineers and even Wal-Mart - to distribute supplies. The agency also was placing stocks of sandbags and other supplies in states or towns where flooding hadn't hit yet or material had not been requested, just to be ready, he said.

A housing task force was being formed in every state to meet the next big challenge.

David Garratt, FEMA's acting head of disaster assistance, said during a conference call from Washington that the administration didn't believe there would be a large need for temporary housing and that what need there was would likely be handled "through existing rental resources."

Sen. John McCain of Arizona, the presumed Republican nominee for president, also visited Iowa on Thursday in a tour separate from Bush's. His opponent, Democratic Sen. Barack Obama of Illinois, helped fill sandbags over the weekend in Quincy, Ill.