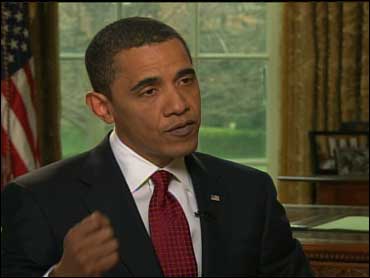 (CBS)
On Face The Nation Sunday, President Barack Obama said that U.S. automakers have not yet made the necessary case for receiving additional federal funds - even though their deadline for reconfiguring their business plan is Monday.

"They're not quite there yet," the President told Face The Nation host Bob Schieffer.

The president acknowledged the efforts being made by Ford, Chrysler and GM since they initially asked for bailout funding.

"There's been some serious efforts to deal with a combination of long-standing problems in the auto industry and the current crisis," he said.

Mr. Obama will announce his plan for the flailing American industry on Monday and was resolute that the carmakers still have a way to go to prove their business models are sustainable.

CBS News producer Rob Hendin, in Washington, reports that on Sunday evening the White House confirmed that General Motors CEO Rick Wagoner was asked to step down and agreed, something the president alluded to on Face The Nation.

He argued that the only way to reach that goal is through a "set of sacrifices from all parties involved," including management, labor, shareholders, creditors, suppliers and dealers.

"Everybody's gonna have to come to the table and say, 'It's important for us to take serious restructuring steps now in order to preserve a brighter future down the road,'" the president said.