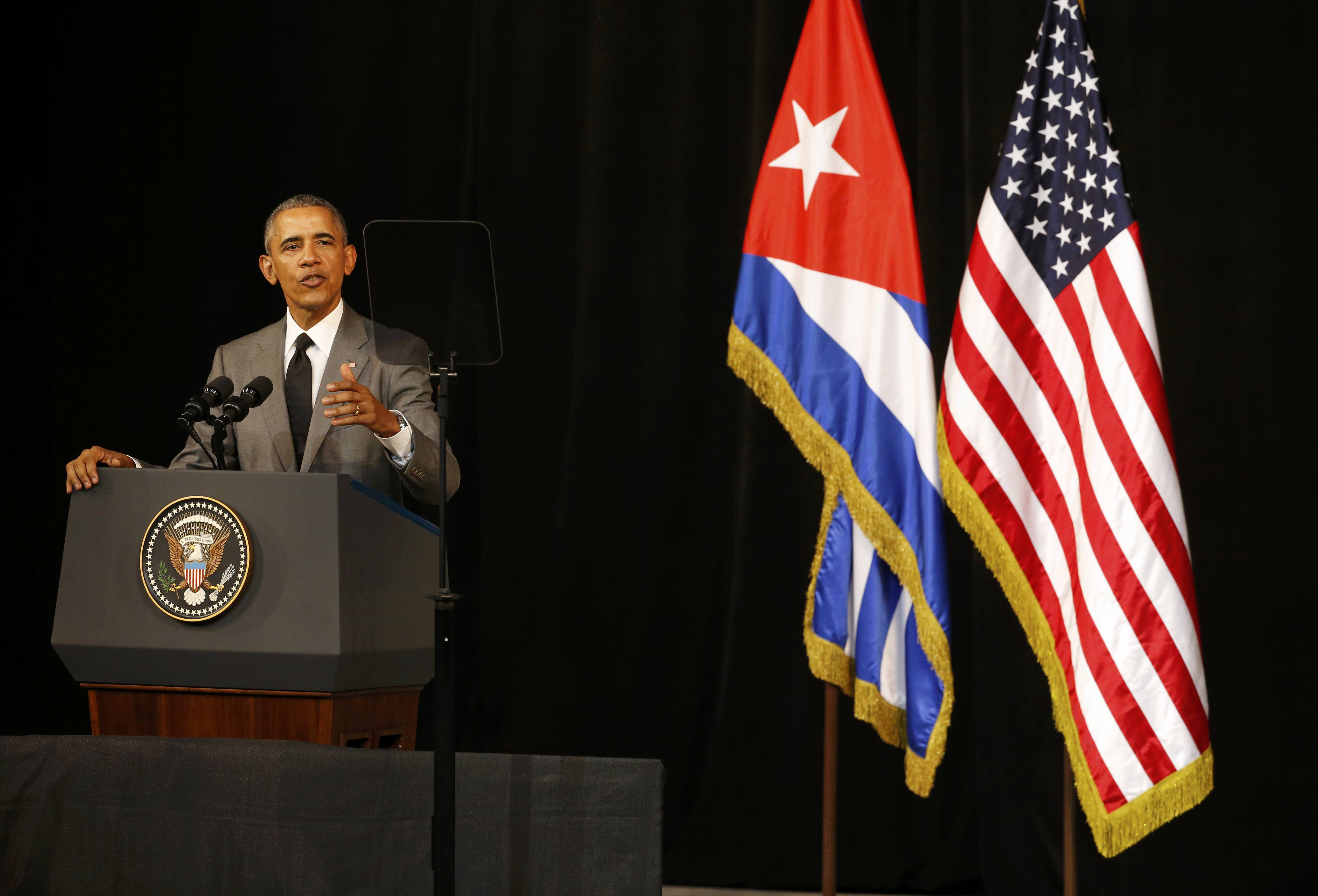 "I have come here to bury the last remnant of the Cold War in the Americas," Obama said, to applause.

The speech came on Mr. Obama's third and final day in the island nation, the first visit of a sitting U.S. president since Calvin Coolidge in 1928. On Monday, Mr. Obama and Cuban President Raul Castro held a joint press conference and attended bilateral meetings in Havana.

In his speech, Mr. Obama paid tribute to the shared culture and history of the two countries, expressing hope for the future of the U.S.-Cuba relationship while also making it clear that democratic reforms are needed in a country that's been led for decades by the Castro family.

Mr. Obama noted that many in the audience have lived their lives entirely during the time of estrangement between the United States and Cuba.

But the two nations are at a crossroads in their relationship, he continued, enough so that future generations will look back on the period of isolation between the two countries as "an aberration." So much of that relationship is changing, he said: the two countries have opened embassies, begun planning for direct flights and resumed mail service, and he has called on Congress to end the "outdated burden" of the trade embargo.

As for why this is happening now, Obama said, "there's one simple answer: what the United States was doing was not working."

"A policy of isolation designed for the Cold War made little sense in the 21st century," he added.

Still, Mr. Obama addressed head-on the many differences between the two countries, saying it's not his place to tell the Cuban government or the Cuban people what to do but that he believes democracy is the best way to foster innovation.

He acknowledged that Castro has long criticized many aspects of the American government and economy, including yesterday at a joint press conference the two men held in Havana.

"For many years he has pointed out the flaws in the American system: economic inequality, the death penalty, racial discrimination, wars abroad--that's just a sample, he has a much longer list," Mr. Obama said, to laughs from the audience. "But here's what the Cuban people need to understand: I welcome this open debate and dialogue. It's healthy--I'm not afraid of it."

Mr. Obama called for widespread Internet access and fewer barriers to starting a business in Cuba, speaking about the democratic ideals he as president of the United States supports.

"Let me tell you what I believe: I can't force you to agree, but you should know what I think," he said. "I believe that every person should be equal under the law. Every child deserves the dignity that comes with education and health care and food on the table and a roof over their heads. I believe citizens should be free to speak their mind without fear, to organize and to criticize their government and to protest peacefully."

Mr. Obama said American democracy isn't perfect--it's messy and flawed--but it's still the best way for a people's ideals to be realized.

"So here's my message to the Cuban government and the Cuban people: the ideals that are the starting point for every revolution--America's revolution, Cuba's revolution ... those ideals find their truest expression, I believe, in democracy," he continued. "Not because America's democracy is perfect, but precisely because it's not."

He made reference to the 2016 presidential campaign, saying the sheer racial, gender and ideological diversity of the candidates involved says something about the power of democracy and the changes that can be made under a democratic system.

"Just stop and consider this fact about the American campaign that's taking place right now: you had two Cuban-Americans, in the Republican Party, running against the legacy of a black man, who is president, arguing that they're the best person to beat the Democratic nominee, who will either be a woman or a Democratic socialist," Obama said. "Who would have believed that back in 1959?"

Obama also briefly made comments about the terror attacks in Brussels Tuesday morning, saying at the top of his Havana speech that the "thoughts and prayers of the American people are with the people of Belgium."

"We will do whatever is necessary to support our friend and ally Belgium in bringing to justice those who are responsible," he said.